Accompanied by councillor James Lewis, leader of the council and councillor Helen Hayden, executive member for infrastructure and climate, Alistair Brownlee makes the first tracks on the route ahead of the official opening.

ELOR also includes a 9.8ha country park provided on the land north of the A64 (York Road) and east of the ELOR. The country park underpass provides access from the west with the park providing green infrastructure to the road itself and significant local recreational space for existing and future residents.

Along the southern and western edge of the ELOR a 2.5m wide cycleway and 2m footway has been provided along the length of the 7km carriageway. A 2m high screening bund is to be provided to separate the carriageway from the cycle and pedestrian routes. Along the majority of the ELOR north and eastern boundaries a leisure route/ bridleway comprising a rolled stone surface is to be provided for walking, cycling and horse-riding. The leisure route connects to existing Public Right of Way network in the area. The leisure route is separated from the ELOR by mixed shrub and woodland planting.

The scheme also sees significant investment in green-blue infrastructure which incorporates planting of trees and other plants as well as sustainable water management solutions along the route which will improve drainage, provide environmental benefits, and add to the look and feel of the route including new wildlife corridors and habitats.

The route provides the infrastructure to match growing traffic numbers and future requirements as the East Leeds Extension stretches around the edge of Red Hall, Whinmoor, Swarcliffe and Crossgates. The extension allows for the development of up to 5,000 new homes and supporting infrastructure and plays a key role in the Council’s ambition to deliver 52,000 new homes acrosswhat the city by 2028.

“The East Leeds Extension has been a major long-standing commitment to enable the sustainable growth of the city. Creating attractive new neighbourhoods which integrate with surrounding local communities and providing facilities that serve the needs of new and existing East Leeds residents.

“The proposed housing developments will connect to three pocket parks and two outdoor gyms, and major areas of new public greenspace which having had the opportunity to cycle some of the scheme today, should be greatly received by residents in the area.

“I was honoured to come to celebrate and commemorate the achievements of the scheme and cycle with a two-time Olympic champion.”

“This massive scheme delivers much needed cycle infrastructure to the area and connects existing cycling routes to the new purpose-built ones.

“The East Leeds Orbital Route is more than a road network, this and the East Leeds Extension improves connectivity and helps regenerate the wider East Leeds area by boosting economic growth and bringing more jobs to the area, with connected greenspaces that promote active travel and healthy lifestyles.

“Pedestrians will also benefit from new walking routes and safer crossings.  All of which is a bid to make sustainable travel more appealing by improving public transport, walking, and cycling connections and in turn contributing towards tackling the climate emergency.”

Leeds City Council have worked closely with West Yorkshire Combined Authority (WYCA) to secure funding from a range of sources for the scheme.

“The East Leeds Orbital Route is an excellent example of the significant investment we are providing to key projects throughout the region to promote cycling and walking across Leeds.

“From new cycling and walking routes to the creation of a new neighbourhood with the potential for thousands of new homes, this project will create a new hub for people in East Leeds and beyond, connecting them to jobs and other opportunities for work, study or leisure.”

“I am really impressed with the connectivity this new active travel route provides and how it will bring new and future communities in the east of Leeds together.

“The scheme provides opportunities for families and friends to cycle together away from traffic. The pocket parks situated along the cycle paths will function as great rest spots for families and give them the opportunity to learn about nature whilst living in a city.

“As active travel ambassador for Leeds I think the more cycle infrastructure we provide in Leeds, we will encourage more people to implement an active travel lifestyle into their lives.”

The East Leeds Extension is separated into four areas – Red Hall, Whinmoor Fields, Morwick Green and Pendas Beck – new neighbourhoods which are connected and integrated with existing areas but also have their own unique character, and names which draw on their existing features and heritage.

The carriageway is still in construction but is planned to be fully opened by September 2022. 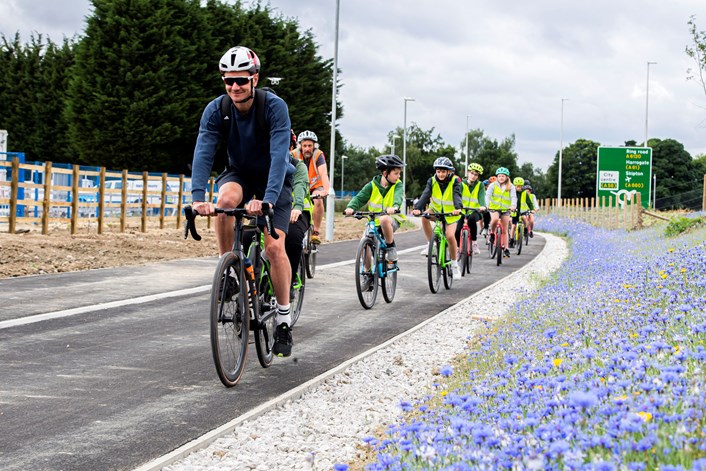 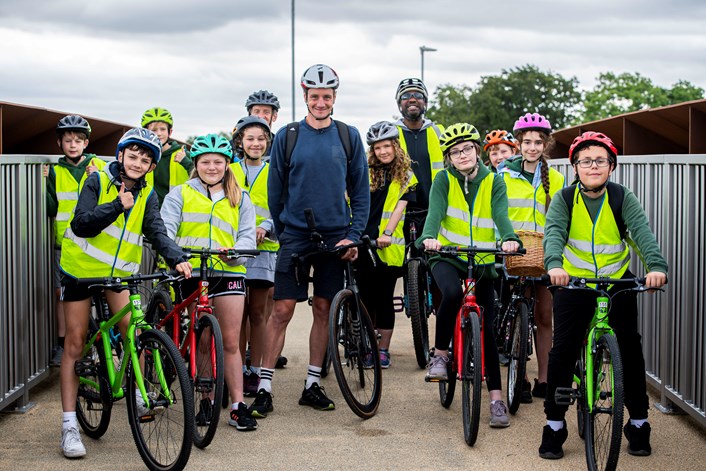 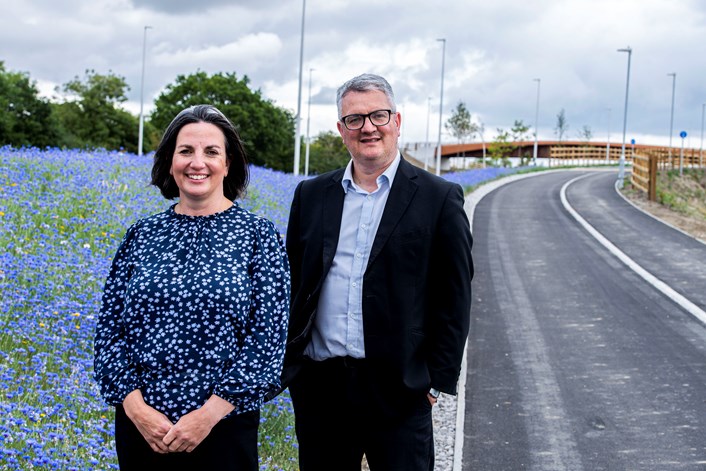