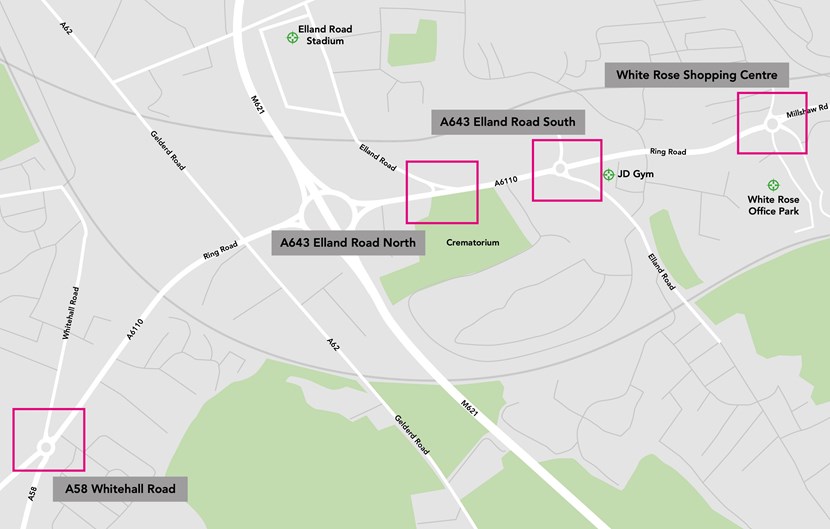 A new consultation starts today, 2 November to deliver improvements on the A6110 Outer Ring Road between the White Rose Shopping Centre, A643 Elland Road and A58 Whitehall Road.

The ambitious plans include improvements on the A6110 outer ring road that will reduce congestion and make it safer for people to walk and cycle. The proposed improvements will also make bus services quicker and more reliable to provide a more attractive alternative to the private vehicle when travelling this route.

The enhancements are expected to be delivered in four phases taking a junction-by-junction approach. Phase one of the scheme will be at the A643/A6110 junction which is proposed to be delivered by 2024. The remaining phases will be delivered when funding becomes available.

The consultation is seeking feedback on new cycle tracks, bus priority measures including bus lanes with junction upgrades, highway space adjustments and new pedestrian crossings with footway improvements. The scheme aims to reduce delays along this busy route improving the journeys of residents and commuters for all modes of transport.

“Now, more than ever, it’s important we reduce our collective carbon emissions.  In Leeds, part of our commitment to this is an ambition to be a city where you don’t need a car. That means making public transport easier to use and promoting decarbonised travel. We know that people are willing to make small gradual changes from switching to electric vehicles to making more use of public transport and reducing their reliance on private cars.

“Our commitment is to be a net zero city by 2030 and infrastructure improvement schemes like this one will help our goal, to give people real travel choices by making bus services quicker and more reliable, whilst also making local journeys on foot and by bike safer, more convenient and attractive.

“I would urge everyone to get involved with this consolation and make their views known. “

The A6110 outer ring road is the main arterial route connecting south Leeds and the city centre which extends from A647 Stanningley bypass to the north and White Rose Shopping Centre to the south. The route is intersected by several key radial routes including the A58 Whitehall Road, A643 Elland Road, A653 Dewsbury Road and provides a connection to the M621 and wider motorway network. The road experiences congestion during peak periods causing delays to general traffic, reducing bus journey time reliability, and increasing localised pollution and CO2 emissions.

The A6110 is also a key route for several express buses, many of which serve the White Rose bus station. Therefore the addition of dedicated bus priority lanes along the corridor is a key element of the proposed improvements of the A6110 outer ring road scheme.

“As Mayor, I’m committed to doing everything within my power to tackle the climate and environment emergency – and one of the keyways we will achieve a net zero carbon economy in our region is by offering people viable alternatives to using their cars.

“This improvement scheme will make it much easier and safer for people to walk and cycle as well as improving the reliability of buses with the introduction of priority bus lanes.

“I want to encourage as many people as possible to take part in this important consultation and ensure the scheme really works for everyone in the community.”

“People living and working along the A6110 outer ring road are well aware of the issues caused by congestion and poor air quality.

“This scheme will not only tackle those issues head on, it will also make travelling by bus more attractive.

“We know that reliability can often be a barrier to people using the bus but by providing priority bus lanes, we will be able to make a real difference to journey times.”

The ring road suffers from a lack of pedestrian and cycling provision which discourages the uptake of more sustainable travel choices for residents and others that use this route on their daily commute.

Have your say in the consultation which closes 5 December and read more about the plans here: https://a6110.commonplace.is/. Feedback gathered in the consultation will be used to inform proposals of the next stages of the scheme development. If you would like to speak to the team in person, we're holding a public consultation drop-in event at St Peter's, Morley, Rooms Lane, Leeds, LS27 9NX, 3pm to 7pm on Monday 22 November 2021. 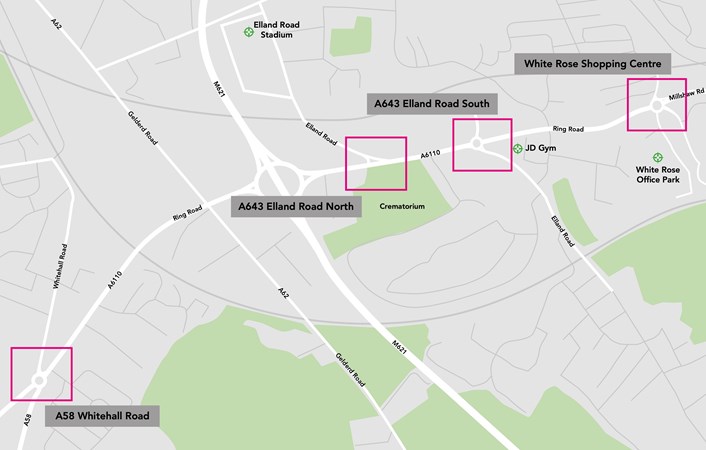