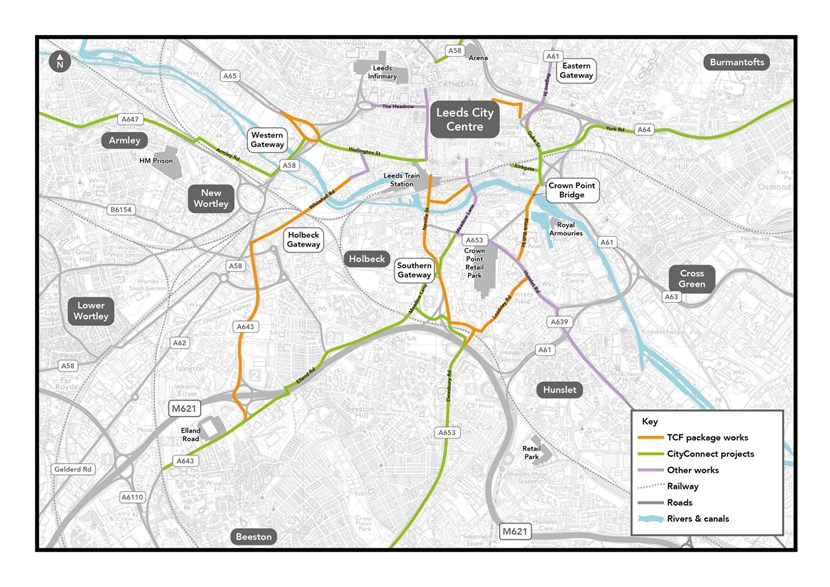 Building on the transport conversation in previous years and the extensive work completed in the city centre over the past 12 months, senior councillors in Leeds will discuss additional work to improve cycling links in and around the city centre at a meeting next week.

At the council’s Executive Board on Wednesday 23 June, councillors will consider a report progressing further plans to transform cycling in the city centre. The report presents plans to approve £7.06 million of new cycling routes across Leeds, as part of Leeds city council’s plans aimed to encourage more people to travel by bike, in partnership with the West Yorkshire Combined Authority, through the Leeds City Region Transforming Cities Fund.

The plans will add 7kms of high quality, modern cycle facilities to the Leeds city centre cycle network across five separate schemes. Together, they will increase the length of continuous cycling infrastructure by linking up and filling in gaps to the existing and planned cycle network, and extend and complement the recent projects delivered by CityConnect and the Leeds Public Transport Investment Programme. The aim is to improve the connectivity to the city centre and access of the city-wide cycle network.

These schemes will also improve cycle access to Leeds railway station, enabling people to extend their trips by train across West Yorkshire and shorter trips within Leeds. Plus they will help encourage more trips to be made within the city centre.

A previous consultation earlier this year found the majority of users considered at least part of the cycling experience in the locations currently need to be improved. The majority of respondents agreed the proposals would improve cycling around the city centre.

Following the consultation an additional sixth ‘linking’ scheme to connect existing cycling infrastructure on Dewsbury Road has been added, with the scope of the funding to complete by spring 2023.

A route to link Holbeck into the western part of the city centre at Whitehall Road. This project adds to existing work on the corridor. It provides access to and from Holbeck and forms a network with the recently delivered CityConnect 2 and CityConnect 3 projects in the city centre and in south Leeds.

Tying together a number of existing routes, this scheme leads into the West Street gyratory to enable easy and safe access from one side to the other. This includes CityConnect 1 from west Leeds, CityConnect 2 on Wellington Street and the A65 Quality Bus Corridor which includes cycle provision.

This project complements the existing work delivered on St Peter’s Street from the CityConnect 2 project and the Regent Street project, and links to the current works on Vicar Lane and beyond. It will allow an east-west route to be fully delivered in the northern part of the city centre.

The Crown Point Bridge scheme will provide a safe segregated route across the river, serving the south eastern part of the city centre.

This scheme will create a major route into and out of the city centre from the south, linking a number of existing routes to and from Leeds rail station and City Square.

The project links the existing cycle infrastructure on Dewsbury Road into the Southern Gateway to Hunslet Road and Crown Point Bridge Street.

The next phase of planning involves Leeds city council consulting directly with local residents and businesses to make new active travel measures work for all users, with construction to start over the summer.

"It’s always important to remember that as well as being a primary way to get about, cycling and walking can play a part in bigger journeys. That’s why I’m pleased to see these schemes improving cycle access to Leeds railway station, enabling people to extend their trips by train across West Yorkshire and beyond.

"The proposals contribute to the Leeds target of reducing carbon emissions by 2030 by improving facilities for cycling close to the city centre, facilitating linkages to even further develop the cycle network, and to encourage these transport choices as an alternative to car journeys.

"I’m keen to see every new piece of segregated cycleway in Leeds, as each part moves us nearer to the 500 miles of cycle network we want to see across the city. We want to make Leeds the number one cycling city in the North of England. The only thing holding that ambition back is proper funding and I would like to see more opportunities like this new to deliver our vision.”

It is estimated the programme will improve journeys by bus, rail, bike and on foot for up to 1.5 million people, take up to 12 million car trips per year off our roads and reduce CO2 emissions from car travel by up to 15,000 tonnes by 2036. 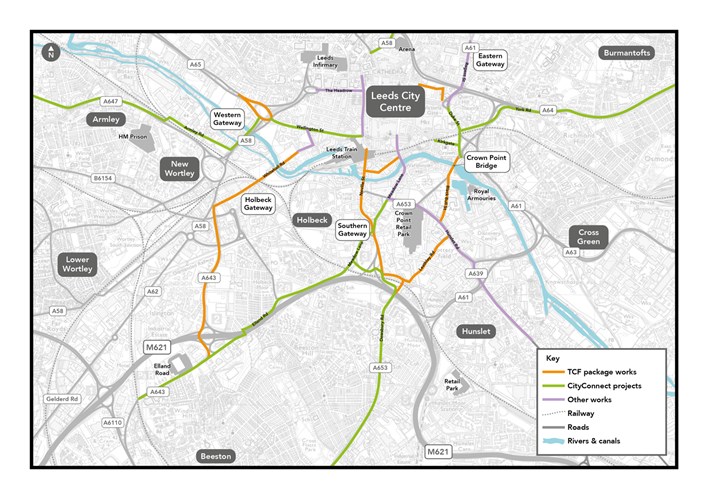