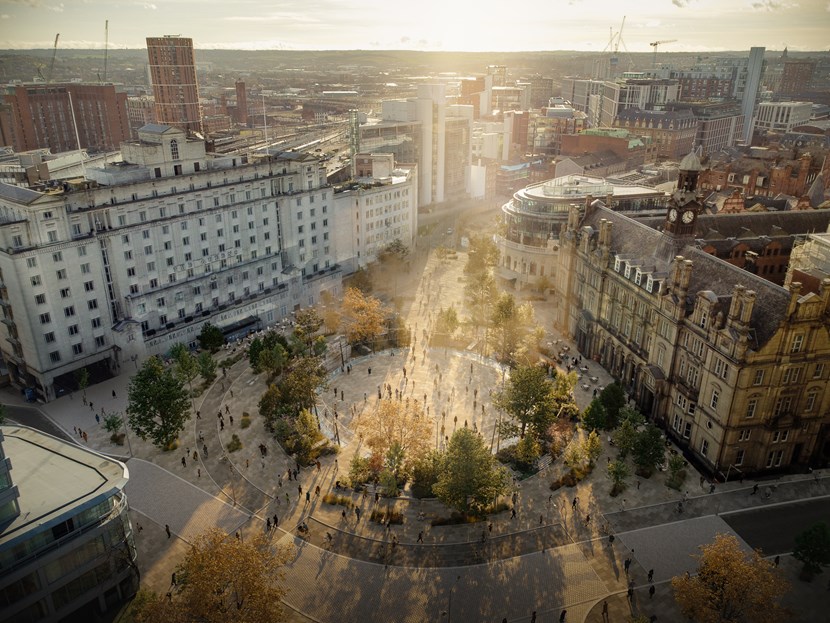 Plan ahead for the new year with new routes, as Connecting Leeds transforms travel

This new year Connecting Leeds will start construction on several major highways’ schemes, which are all part of transforming travel in the city and across the district.

Connecting Leeds construction works will begin first on the Armley Gyratory, before focusing on roads around City Square, Leeds train station and along routes linking to the city centre. This will be the first phase to create a world-class public space and arrival gateway to the city centre for train, bus users, pedestrians, and cyclists, and will eventually see City Square closed to through traffic in readiness for the Year of Culture in 2023.

These are all part of over £100 million of transformative highways works to overturn historic barriers and issues developed from the ‘Leeds Motorway City’ of the 1970’s. This created substantial ‘through traffic’ across the city centre, which has contributed to environmental issues and disconnected neighbourhoods – which can make it more difficult for people to travel on foot or cycling between different areas. Leeds City Council’s approach to re-route traffic away from the city centre on to the more appropriate Inner Ring Road and the M621 orbital route following the closure of City Square, will enable public transport, walking, cycling and public realm plans to be realised in the city.

Although still subject to programme changes, the construction timetable covers these affected areas:

This spring will also see works complete around the Corn Exchange gateway scheme, Leeds bus station, A647 Leeds to Bradford route, the A61 south towards Stourton, Regent Street flyover, and the extension to Temple Green park and ride. This follows schemes completed in 2021, despite the disruption of the Covid pandemic, like the UK’s first solar powered park and ride at Stourton, the Headrow Gateway scheme, Cookridge Street, Park Row, and Infirmary Street.

Over the past three years the council has made big progress in the delivery of people-first infrastructure and public spaces across the city centre. There has been around £200 million invested in improving Leeds City Centre, including the Leeds Public Transport Improvement Programme (LPTIP) Connecting Leeds works delivered in partnership with the West Yorkshire Combined Authority, with major investments enabling support of the 3.5-hectare green City Park, and the delivery of the Our Spaces schemes.

The works have been delivered at the same time as one another, and at unprecedented pace to meet the deadlines of government funding. Our transport conversation findings in 2016 made it clear the public wished for improvements to be made as quickly as possible.

Last year the majority of respondents also support the council’s Connecting Leeds transport strategy and ambition - to be a city where you don’t need a car. It promotes a range of solutions intended to reduce carbon dioxide emissions towards the council’s climate emergency 2030 target. This means creating better experiences that make it easier for walking and cycling, along with seeing public transport more reliable and accessible. Post-covid, this approach is considered crucial to the city’s recovery in achieving the ambitions of economic recovery, inclusive growth, health and well-being, and addressing the climate emergency.

Connecting Leeds are working hard to deliver these improvements as quickly as possible and apologise for some significant disruption to journeys over the coming months. Specific details around the schemes will be publicised well in advance, along with highways signage and targeted communications in affected areas.

In the meantime, Leeds visitors, workers and residents are being urged to plan ahead with a new website page (www.leeds.gov.uk/campaign/new-route) before travelling and to sign up for regular email updates or follow Connecting Leeds on social media.

These plans are on top of the already large number of temporary road closures and street works to facilitate works by utilities companies, private building developers, contractors acting on its behalf and its own in-house contracting team. And despite of these challenges, plus Covid-19 approximately 900 road closures and 30,000 street works have been overseen by the council in the last 12 months.

“This year marks another major step in meeting our ambition to be carbon neutral by 2030, as well as our preparation for the 2023 Year of Culture.

“These works will transform the city centre, with the changes to City Square and the train station helping cement Leeds a first-class city to live in or visit. The new and improved public space that will great arrivals to the city centre is something that everyone can enjoy, regardless of the reason for their trip and is a real show of our dedication to better space for people, rather than cars.

“Reallocating road space in favour of public transport, walking and cycling is a trend we are carrying out across our city, helping work towards the council’s vision of a city where you don’t need a car. We are working on greater and improved connectivity and with more appealing public space to make that vision a reality.

“The necessary works at Armley Gyratory and Regent Street flyover will move vehicles on to the inner ring road where they can travel more efficiently and, in the case of Armley, will be delivered alongside cycling and pedestrian improvements.

“I know these works cause disruption and I would like to thank the people of Leeds for their continued patience. We’re working as fast as we can to make these improvements, but please plan ahead and use public transport, walk or cycle if you are able as we continue to transform travel across your city.”

“I welcome the planned Improvements to Armley Gyratory supporting our vision to make this part of Leeds a safer and healthier environment for public transport users, pedestrians and cyclists. The Armley Gyratory proposal will create significant benefits for local communities to access the city centre, with improved cycling and pedestrian facilities. New landscaping will also create green pedestrian links and increased visibility for different road users, helping enhance the personal security of pedestrians, cyclists, and all road users.

“These improvements to Armley Gyratory are also a key component of the Connecting Leeds ambition and key to unlocking more pedestrianised areas such as City Square in the heart of the city for us all to enjoy.” 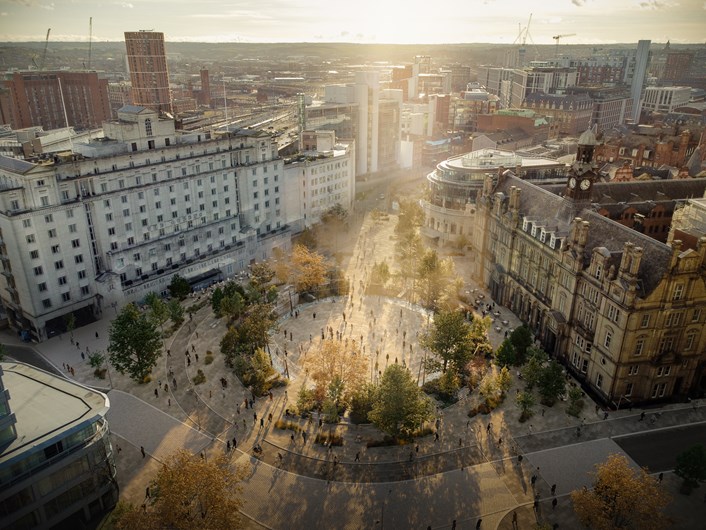 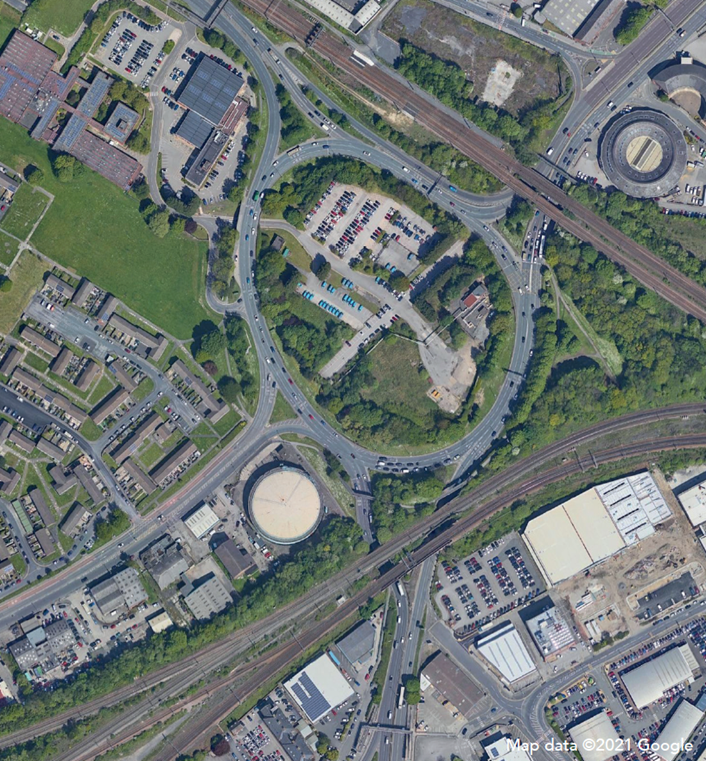 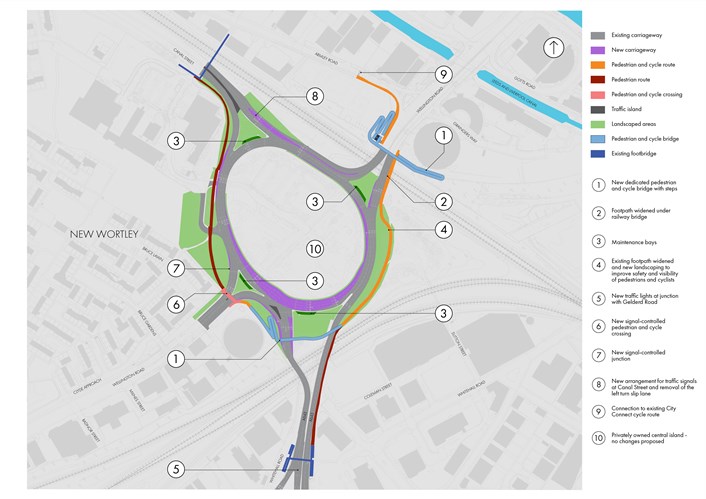