The current public consultation and engagement on plans to improve transport connectivity to Leeds Bradford Airport and in the north west of the city is now in its final week.

The call for views on the latest proposals including an online survey at www.leeds.gov.uk/connectinglba ends at midnight this Friday (12 April).

Leeds City Council, working with West Yorkshire Combined Authority and partners including Leeds Bradford Airport, are seeking responses to the three options being considered to improve road access to the airport as well as the proposed new airport parkway rail station on the Leeds to Harrogate line.

The details include maps, images, an animation and fly-through videos of what the road options and parkway station could look like.

So far almost 2,000 completed surveys have been received since the engagement began in mid-February, with hundreds of people attending drop-in sessions which have been carried out for the public to find out more and discuss all aspects of the plans with officers from the council and West Yorkshire Combined Authority.

The proposals focus on improving access to and from Leeds Bradford Airport, which is a key economic asset for Leeds and the wider region, supporting over 5,000 jobs and contributing £336million to the city region economy each year. It is one of the fastest-growing airports in the UK, with passenger numbers predicted by the Department for Transport to rise from four million in 2017 to 7.1million by 2030 and over nine million by 2050.

To support this expected growth and up to 5,500 new jobs in the employment area next to the airport by 2030, the proposals aim to improve road and rail access as well as addressing current congestion issues in north west Leeds.

The LBA Link Route road proposals put forward three potential schemes. Two of these would see a new road created from the A65, with the first option running along the eastern side of the airport before joining the A658 while the second option would run to the south west of the airport before joining the A658. The third road option would not see a new road created, but existing junctions on the A65 and A658 would be upgraded and, where needed, some localised road widening to deliver the improvements.

The potential for a parkway station nearby to serve the airport by rail and both Leeds and Harrogate by park and ride is now possible because of the Leeds Public Transport Investment Programme, with the city receiving funding of £173.5m from the government to invest in transport network improvements as part of its long-term Connecting Leeds transport strategy.

The parkway element would see a new station built on the existing Leeds to Harrogate line between Scotland Lane and Cookridge, with a short connecting spur road to give access the airport. The station would include a 350-space car park, a bus interchange and a station building. A pedestrian/cycle path to Cookridge is also proposed to reduce pressure on Horsforth Station.

“We know there is a lot of interest and discussion about getting to and from Leeds Bradford Airport, and these proposals have led to that conversation continuing which is what we want and need to have.

“The drop-in sessions were busy and the response has been good, but we really do need as many people to take the time and fill in the survey as it will help guide the next stage of these proposals as they continue to develop.

“These plans will improve access and the local transport network, helping to support the growth of the airport which is essential for jobs and the regional economy, but we do need to hear from as many people as possible by completing the survey in the remaining few days of this latest consultation.”

A combination of both road and rail access improvements are considered essential to effectively support the growth of Leeds Bradford Airport. From looking at other regional airports, such as Manchester Airport which has direct rail and tram links, 84 per cent of passengers still travel to the airport by car or taxi so road access will continue to have a crucial role to play.

“The chamber supports the proposals for a new airport rail parkway station and road access improvements. We would urge all businesses that want to see our economy grow and one of our region’s major assets to expand, to get involved and have their say in the consultation.”

To reduce congestion issues and improve journey times in north west Leeds, a range of junction and capacity improvements are also being proposed at Dawson’s Corner, Fink Hill, and Dyneley Arms, together with signal technology improvements along the A65. Investigations are also underway to identify longer term improvements on the A6120 Outer Ring Road between Pudsey and Horsforth.

Feedback received from the consultation and engagement will be analysed and considered, with a further phase of public consultation to follow later in the year when further technical detail and an emerging preferred road option will be put forward.

For more information and to take part in the consultation, go to www.leeds.gov.uk/connectinglba

The latest projected costings for the LBA Link Route road options are £90-100m for option A, £60-70m for option B and £20-30m for option C. These are indicative figures only at this stage. Due to the various elements involved an approximate costing is not possible yet for the parkway rail station.

Depending on how the process develops and which road option is progressed, it is anticipated the parkway station could be built within five years and the link route within 10 years.

Under the Site Allocations Plan for Leeds, 36 hectares of land next to Leeds Bradford Airport has been earmarked for employment growth and job creation in the area. This has the potential to generate 5,500 new jobs by 2030. 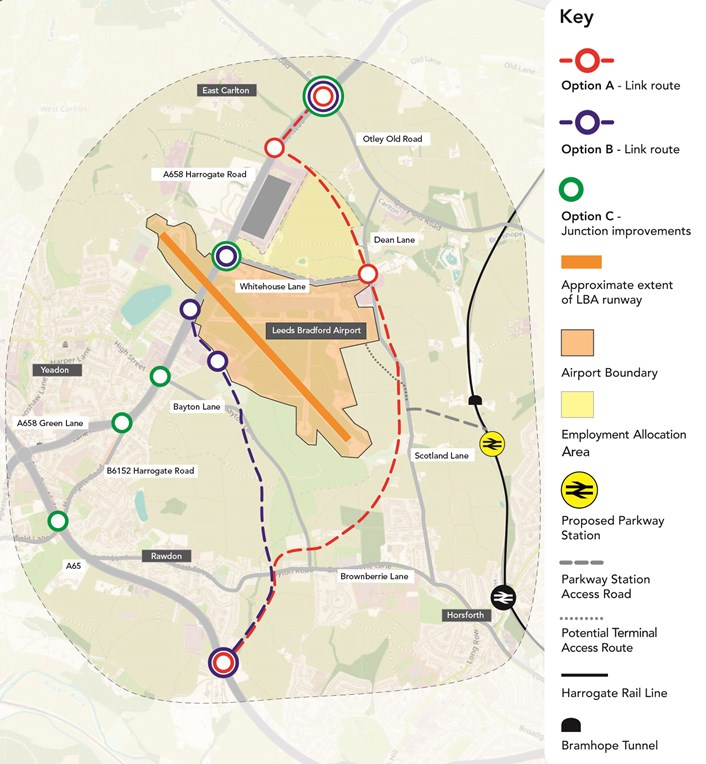