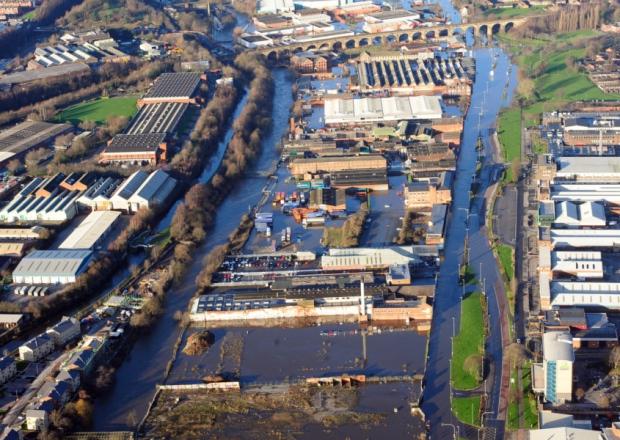 People who live and work in west Leeds are being invited to come along to two drop-in events this month to view the first of the detailed proposals for the second phase of the Leeds Flood Alleviation Scheme.

They will have the opportunity to have a look at the emerging detailed designs and talk to members of the project team responsible for developing the second phase of the flood defences being proposed to protect communities upstream of the city centre.

As part of the second phase Leeds City Council is working in partnership with the Environment Agency to invest up to £112.1 million in flood prevention measures in the River Aire catchment, along a 14-kilometre stretch, including the A65 Kirkstall Corridor which was badly hit by the impact of Storm Eva at Christmas 2015.

Phase two of the scheme is planned to be delivered in two-steps, the first of which is using £65m funding already secured from the government, alongside additional financial support from Leeds City Council and partners. This will reduce the risk of flooding along an 8km stretch of the River Aire from Leeds city centre through the A65 Kirkstall Road corridor and will provide an initial level of protection against the threat of flooding from the River Aire which equates to a 1 in 100 (1%) chance of flooding in any given year. This is the same standard that Phase 1 of the scheme currently provides to the city downstream of Leeds Station.

The scheme also incorporates a flagship catchmentwide Natural Flood Management programme. Leeds City Council and the Environment Agency will work with partners and landowners across the catchment to deliver a range of measures, such as the creation of new woodland and other natural features. These will help reduce and mitigate the flow of rainwater into the river and help reduce the impacts of climate change.

Both phases have been developed so that when the second part of phase two is completed, this area of Leeds will receive enhanced protection up to a 1 in 200 (0.5%) chance of flooding in any given year, helping to better protect 1,485 homes and 370 businesses.

Talks are continuing to secure the remainder of the funding to carry out the second step of phase two and complete the scheme in full which, pending further planning approval, would double the standard of protection offered by the whole Leeds Flood Alleviation Scheme.

“With the work on phase two of the Leeds Flood Alleviation Scheme starting shortly, these drop-in sessions are ideal for the local community or anyone interested in the scheme to go along, find out more about it and discuss it with the team. With another winter imminent and after all the recent rainfall, we are determined to get on with this work as quickly as we can in order to protect our residents and businesses from the ongoing threat of flooding in Leeds.”

“These drop-in sessions are a great opportunity for people to get a better understanding of what is being planned to protect their local community.

“During this event, the joint Leeds City Council and Environment Agency project team will be available to talk to visitors about any concerns they may have about the construction works and provide clarification about anything that they are uncertain about.

“We’re really pleased to have a new base for the project team in Kirkstall and to work with the community and businesses as this crucial work progresses.”

Visitors to the drop-in events will have the chance to ask questions and get more information about the proposed defences. The plans which will be on display include information on all ten zones than make up step 1 of the project.

The project team has now moved to a new site office on Viaduct Road in Kirkstall, ahead of construction works starting in the area in December. The first zone of work will be from Wellington Road to Wellington Street, north of the train station, where flood defence walls will be constructed.

BMMjv a joint venture between BAM Nuttall and Mott MacDonald, was awarded the design and build contract for the project in June this year.

As the project develops, there will be further opportunity for the local community to come into the new site office regularly to get updates on the project as it develops.

These events follow on from a series of drop-in sessions held in Kirkstall in February this year.For more details on the scheme visit: https://www.leeds.gov.uk/parking-roads-and-travel/flood-alleviation-scheme