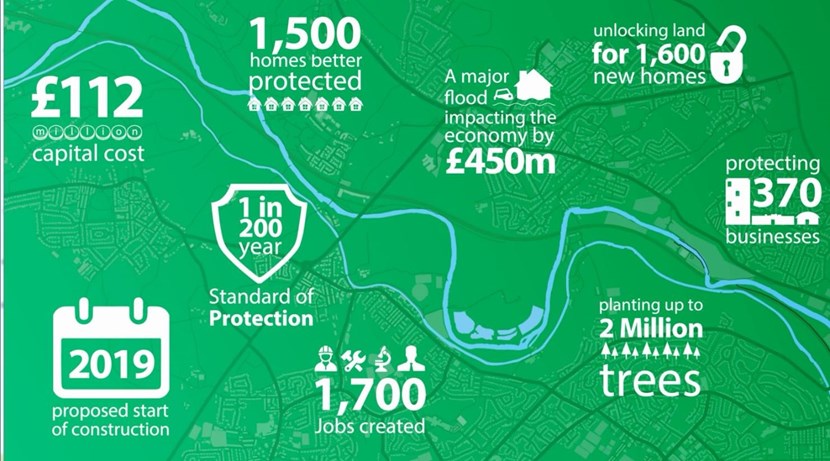 The next phase of work on a major project to protect Leeds from the risk of flooding has been confirmed after the contract for it to proceed was signed today.

Leeds City Council has agreed a contract worth £75.98million with contractor BMMjv, a joint venture between BAM Nuttall and Mott MacDonald, to carry out the first step of the two-step approach to the next phase of the Leeds Flood Alleviation Scheme. This follows planning approval which was granted earlier this month.

The announcement is a significant milestone as it confirms work will start on site, likely to be before the end of the year, for the range of works along the River Aire including the Kirkstall Corridor and upstream which were badly hit by the Christmas floods in 2015.

The project, being managed by Leeds City Council and the Environment Agency, will see linear defences provided along the 8-kilometre stretch upstream of Leeds Station. It will focus on three key areas - Leeds Industrial Museum at Armley Mills, Kirkstall Abbey and Kirkstall Meadows.

This work will be supported by a flagship Natural Flood Management programme delivered by the Environment Agency. It will work with partners and landowners to deliver a range of measures, such as the creation of new woodland, woody debris dams and wetland areas, which can slow the flow of rainwater into the river, helping to reduce the risk of flooding and mitigate the impacts of climate change. Additional planning approvals will be sought from the relevant authorities as the catchmentwide programme develops.

Landscaping works will also be carried out to benefit the environment and wildlife, and to improve access to amenities. This will include two new bridges, improvements to footpaths and new natural areas.

This first step of work can proceed using the funding already in place from the government, Leeds City Council and other stakeholders. It will offer a one-in-100-year level of protection against the risk of flooding. Talks are continuing over securing the additional funding needed to complete the £112.1m phase two of the scheme in full, with a second step of works to follow to lift the whole scheme up to a one-in-200-year level of protection, as has been identified as being needed for Leeds following the Christmas 2015 floods.

The £50m phase one of the scheme, featuring state-of-the-art moveable weir technology to protect Leeds city centre and downstream to Woodlesford, was completed in 2017.

“This is a hugely important milestone for Leeds, as it commits us to getting this vital work done and hopefully underlines our commitment to doing everything to can to make our residents and businesses safe from the risk of flooding as soon as possible.

“We look forward to seeing work starting later this year, and we continue to explore every option in order to get the whole scheme completed in full as that is absolutely essential for the future of our city and all the communities who remain vulnerable to the risk of flooding.”

“I’m really pleased that our joint project team has achieved this milestone. We are now able to begin work on the ground at pace making best use of the funds we have available.

“Our ambition is still to complete both steps of this second phase of the scheme. The first step will provide much better protection from the River Aire upstream of Leeds station through the Kirkstall area and out to Newlay.

“We are looking forward to this next stage of delivery and being able to share the detailed design of the proposed scheme with the residents, businesses and the wider community.”

“Our teams at BAM Nuttall and Mott MacDonald are proud to be awarded the contract for the second phase of Leeds Flood Alleviation Scheme, building on our strong partnership with Leeds City Council and the Environment Agency.

“We’re looking forward to our continued collaboration, delivering our common goals to reduce carbon and protect residents and businesses in Leeds from flooding, as we work together to create sustainable environments for people and wildlife.”

Once the further funding has been secured and planning approval received for it, step two of the two-step approach would see the creation of a flood storage area near Calverley, with moveable weir technology used to allow water to be stored and then be released slowly back into the river in a controlled way.

Carrying out the second step would reduce the risk of flooding along the 20km stretch of the River Aire from the outer ring road to the west of the city, through the city centre and past Stourton.

As part of this work, investigations which are being carried out into the structure of the listed Apperley Bridge in Bradford to understand what alteration work is needed to reduce the impacts of flood risk. The bridge would be restored to retain its appearance and protection would be provided underneath to reduce erosion.

A new flythrough video has been released explaining the works planned for phase two of the scheme in full along the river, which can now be seen at www.leeds.gov.uk/fas

Updates on the scheme and information on the scheme can be seen on twitter @LeedsFAS. To sign up for newsletters updates email: lfas@leeds.gov.uk 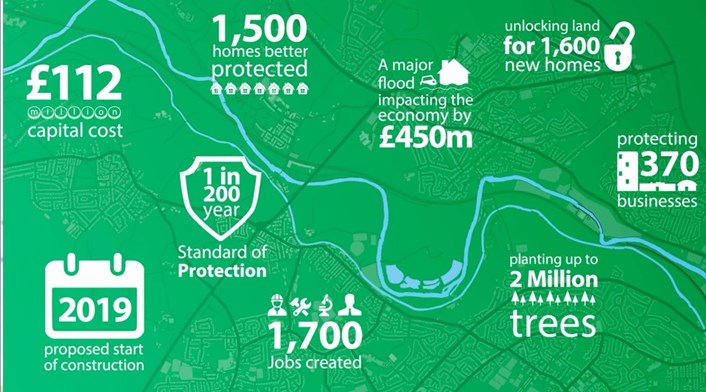