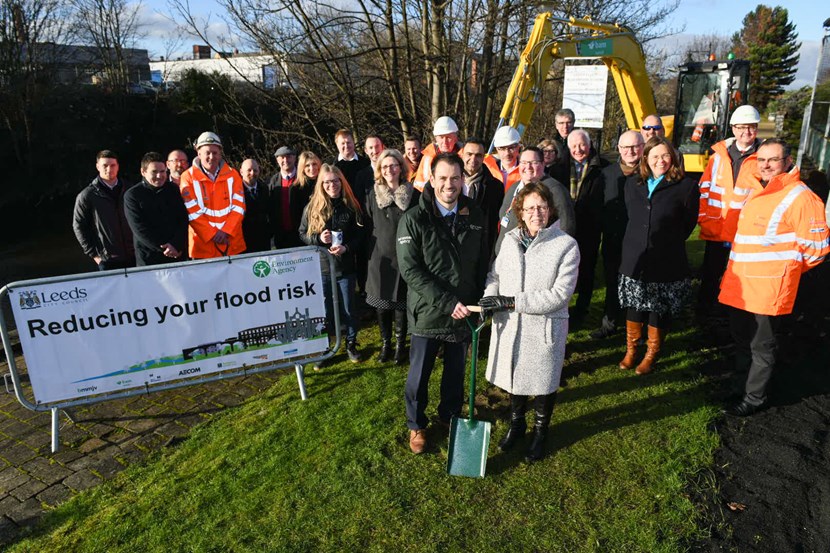 Work has started on the next stage of a major scheme to reduce the risk of flooding in Leeds.

Construction on the second phase of the Leeds Flood Alleviation Scheme will see flood defences being built on the River Aire upstream of Leeds Station as part of a catchmentwide approach to reducing flood risk.

Leeds City Council is working alongside the Environment Agency on the scheme which aims to invest £112.1 million in flood prevention measures for areas upstream of Leeds city centre, to better protect 1,048 homes and 474 businesses.

The Phase 2 proposals are split into two steps and feature measures such as new defence walls, embankments and a large flood storage area.

The first step of Phase 2, at a cost of £87 million, will give protection against a one-in-100 chance of flooding in any given year along an 8km stretch upstream of Leeds station including three key areas – Leeds Industrial Museum at Armley Mills, Kirkstall Abbey and Kirkstall Meadows. These works are expected to be complete by winter 2022.

The second stage involves creating flood storage at Calverley, making use of an existing flood plain, and works at Apperley Bridge, which will bring the level of protection up to a one-in-200 chance of flooding in any given year, equivalent to the Boxing Day floods that hit areas such as Kirkstall in December 2015.

Today, works have started in the Wellington Bridge Street area upstream of the city centre, on a flood defence wall running along the River Aire.

“It is very pleasing and heartening to see the next stage of this ambitious scheme to reduce the risk of flooding along the River Aire starting. Seeing work happening on the ground will hopefully give reassurance to the communities, businesses and residents in the Kirkstall Corridor and upstream that soon they will have measures in place to prevent a repeat of the catastrophic damage and pain caused by the impact of Storm Eva.

“This is the first step of a two-step process which we are determined to see completed in full. We continue to call on the government to provide the remaining funding or meet with us to discuss options so we can ensure all communities vulnerable to flooding from the River Aire have the highest possible level of flood defences in place, and our city is as resilient as we can make it to the increasing threat of extreme weather events due to climate change.”

“Our joint project team is delighted to have achieved this significant milestone of starting construction on flood risk alleviation works in an area which was impacted by the floods of December 2015. Our shared ambition is to complete both steps of this second phase of the scheme. This first step will provide much better protection from the River Aire upstream of Leeds station through the Kirkstall area and out to Newlay.

“The natural flood management measures that will be delivered across the catchment upstream as part of the first step will not only help reduce flood risk but also restore and create new habitat, increase biodiversity resilience and improve water quality. This will contribute to delivering the Government’s 25 Year Environment Plan and realising the vision of the Northern Forest in the Aire catchment.

“The team, led by Leeds City Council, will continue to share further detailed designs of the different zones of work with the residents, businesses and wider community of west Leeds as the construction works progress.”

The Phase 2 work is being split into zones, and detailed designs are currently being worked on for future phases of work up the River Aire corridor. BMMjv, a joint venture between BAM Nuttall and Mott MacDonald, is designing and constructing the scheme.

The project also incorporates a flagship Natural Flood Management (NFM) programme. Natural flood management is when natural processes are used to reduce the risk of flooding. The team is working with partners and landowners across the catchment to deliver a range of measures, such as the creation of new woodland and other natural features. These techniques will hold back water to help reduce the flow of rainwater into the river and help reduce the impacts of climate change.

As part of the river channel maintenance element of the scheme, a small number of trees which have been assessed to be unstable or present a possible flood risk will be trimmed or removed and replaced by newly-planted trees. The removed trees will be recycled as much as possible as part of the scheme, including helping to create new habitat along the river to support wildlife.

Some trees could be removed where it has not been possible to avoid them by changing the design of the flood defence construction works. Three trees will be planted for every tree that is removed, with a preference of re-planting as close as possible. This is in addition to the thousands of trees being planted across the catchment as part of the NFM work.

The project has received an initial £65million from the Government as well as funding from Leeds City Council, West Yorkshire Combined Authority and Network Rail. Leeds City Council is committed to examining all options to secure the funding to deliver the scheme in full.

The work follows completion of the first phase of the Leeds Flood Alleviation Scheme in October 2017 where flood defences were installed along the River Aire in Leeds for the first time. The £50million project began with works completed downstream in Woodlesford which proved effective during the Christmas 2015 flooding, before moving into the city centre with measures featuring the introduction of state-of-the-art moveable weirs at Crown Point and Knostrop to control river levels.

Advanced works have also been completed to deliver parts of the Phase 2 scheme early on. One such project in the completion of a 730 metre length flood wall in September 2018, protecting 88 businesses in the area of Stourton. The £1.4m works provide a 1 in 200 year standard of protection to 88 existing businesses in the Stourton Industrial Estate, safeguard over 4,000 existing jobs in the area and help to protect access to the M1.

Other advanced measures include the part removal of redundant structures at Milford Place and underneath Gotts Bridge along with a number of NFM works at various locations throughout the catchment.

During construction, regular drop-in events will be held at the project team’s new site office on Viaduct Road, where people can stop by to ask any questions about the project. The next session is on Wednesday 29 January from 10am until 2pm at Viaduct Road, LS4 2AP. After this they will run on the last Wednesday of every month.

For more details of the project visit: www.leeds.gov.uk/fas 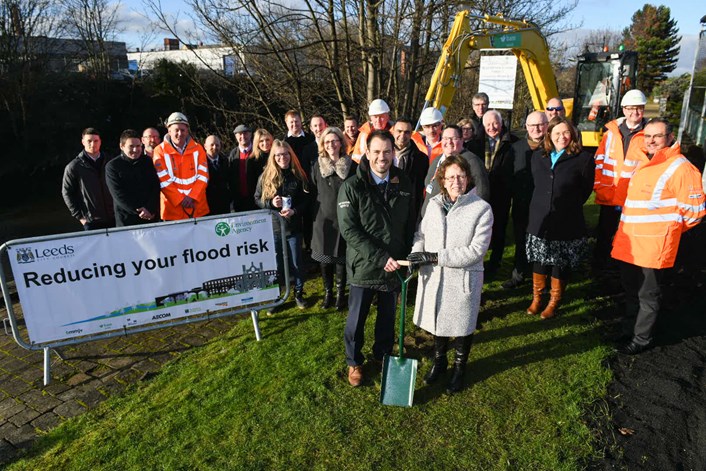