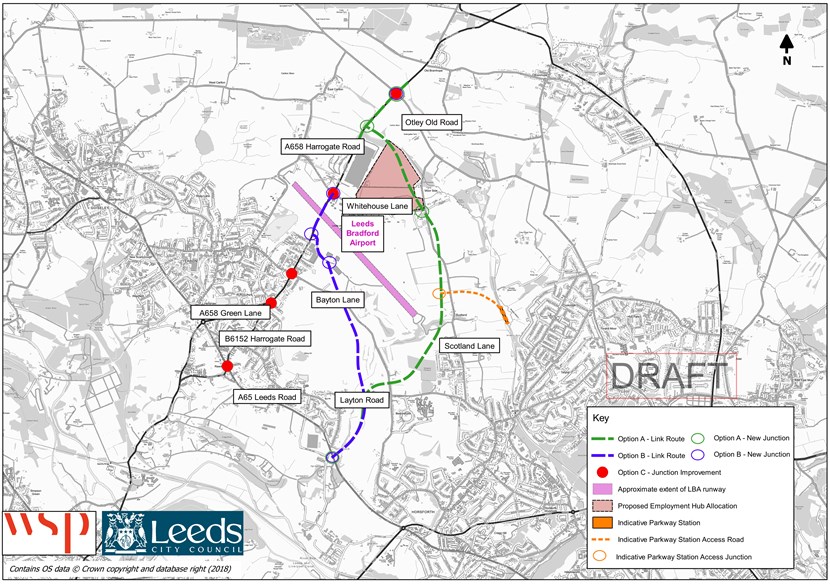 Public consultation and engagement on proposals to improve transport connectivity to Leeds Bradford Airport and in the north west of the city is to take place in the new year.

Senior councillors on Leeds City Council’s executive board agreed a recommendation to carry out the engagement on the proposals to improve road and rail access to the airport to support its future growth, as well as job creation in the area and addressing current congestion issues in north west Leeds.

Leeds Bradford Airport is a key economic asset for Leeds and the wider region, supporting over 5,000 jobs and contributing £336million to the city region economy each year. It is one of the fastest-growing airports in the UK, with passenger numbers predicted by the Department for Transport to rise from four million in 2017 to 7.1million by 2030 and over nine million by 2050.

To support this expected growth at the airport and to support job creation in the wider north west Leeds, the council working with West Yorkshire Combined Authority, Leeds Bradford Airport and key stakeholders has put forward the following key investment proposals:

- Improving road access through one of three options, building a new LBA Link Route a) From the A65 running along the eastern side of the airport before joining the A658; b) From the A65 running to the south west of the airport before joining the A658; or c) Upgrading existing junctions on the A65 and A658 in Rawdon and Yeadon along with localised road widening

- A new airport parkway rail station, located on the existing Leeds-Harrogate Line, with a short connecting spur road to the airport to provide a shuttle bus connection similar to that at Luton Airport. This would also serve as a park and ride service for destinations on the Leeds-Harrogate Line and beyond

The three LBA Link Route road proposals, which were shortlisted following an analysis of a range of possible options, were first announced at the end of 2015. An initial public consultation on them resulted in feedback which focused on calls for improved rail access to the airport rather than road improvements. Other concerns raised were around the lack of detail given, the need to tackle local congestion issues and environmental factors.

The potential for a parkway station nearby to serve the airport by rail and both Leeds and Harrogate has now come about as part of the Connecting Leeds transport strategy, with the city receiving funding of £173.5m from the government to invest in transport network improvements.

Offering rail connectivity to the airport does not, however, remove the need for better road access. From looking at other regional airports, such as Manchester Airport which has direct rail and tram links, 84 per cent of passengers still travel to the airport by car or taxi. Therefore a combination of both road and rail access improvements is considered essential to supporting the growth of Leeds Bradford Airport.

In response to the issues raised in the initial road links consultation, a range of junction and capacity improvements are being considered to tackle congestion and improve journey time in the area.

All of the key details on the proposals to be considered together will be available in the consultation, to take place early in 2019.

“The latest figures from regional airports including Manchester show that 84 per cent of passengers travel to the airport by car or taxi despite there being direct rail links. Therefore, as Leeds Bradford Airport continues to grow, it is vital that we look at ways to alleviate increased traffic on the road network in north west Leeds as well as plans for a rail connection.

“Leeds Bradford Airport is already a huge economic asset for the Leeds City Region and the link road and parkway station plans will form part of a further benefits package to support the local area by connecting to the proposed LBA Employment Hub. I would urge as many people as possible to take part in the upcoming public engagement so to help shape both schemes as they progress.”

To see the report considered by the executive board go to https://bit.ly/2oXcZoX (agenda item 14). 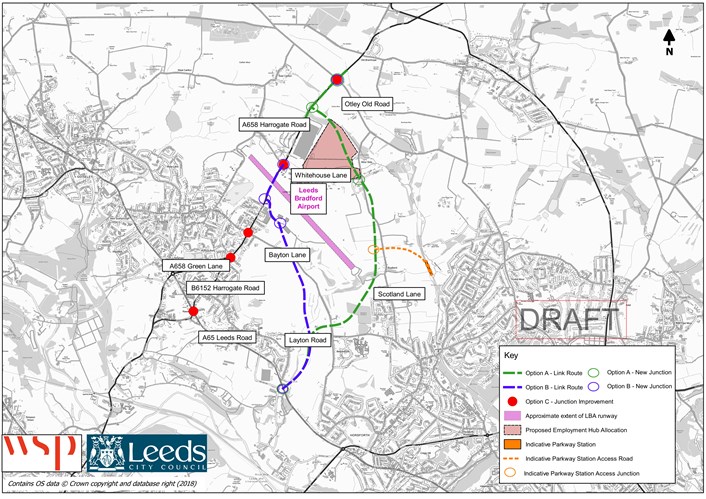