The Leader of Leeds City Council Councillor Judith Blake has written to the government this week expressing the need for a decision to be made over the remaining funding for the next phase of the Leeds Flood Alleviation Scheme.

Councillor Blake has written to the Secretary of State for Environment, Food and Rural Affairs Theresa Villiers outlining the importance of a decision being made by July 2020 at the latest on the current funding gap of £25.1million which exists as part of the £112.1million project to provide a range of flood prevention measures along the Kirkstall Corridor and upstream on the River Aire.

This letter is in response to one from the Secretary of State received earlier this month which stated the funding decision would form part of the next government spending review, which will not now take place until next year.

Councillor Blake is calling on the government to give an initial indication of its decision by February, followed by a final confirmation of funding approval by July at the latest, otherwise the opportunity to integrate the additional works into the current contract will be lost, leading to the risk of the final phase of works being delayed and the costs rising.

To enable work to start on the scheme before the end of this year, a plan put forward by Leeds City Council has been agreed for the project to be carried out in two steps, with the first step using the funding already secured to deliver an initial one-in-100-year level of flood protection.

This would then be followed when the remaining funding has been secured by a final second step which would enhance the whole Leeds Flood Alleviation Scheme to the one-in-200-year level identified as being needed to protect communities along the River Aire catchment from a repeat of the Christmas 2015 floods when the impact of Storm Eva affected nearly 3,500 residential and commercial properties in Leeds.

A plan is in place to deliver the work in full comprising of both steps in three years, but achieving this is dependent on the funding for the final step being secured by July 2020 at the latest.

“Everyone in Leeds and especially anyone living or having a business along the Kirkstall Corridor will remember the catastrophic impact of the Christmas 2015 floods. Until this project is completed in full to offer one-in-200-year level of protection our communities, residents and businesses remain exposed to the increasing threat of a repeat occurring.

“The plan is in place to deliver the work so now we need a decision from the government on the remaining funding to allow us to proceed, but the timeframe for it is getting shorter and shorter. If the funding is not secured by July 2020 getting this work finished is likely to be delayed, putting the lives of people in Leeds and along the River Aire catchment at risk. That is unacceptable so we are now calling on the government to make their decision as soon as possible so that we can get on and deliver these measures that our city needs and deserves. Our determination to deliver this scheme in full remains absolute.”

Phase one of the Leeds Flood Alleviation Scheme was completed in 2017, investing £50m in measures including state-of-the-art moveable weirs to protect the city centre and downstream to Woodlesford.

The plan for phase two was put forward following extensive survey and modelling work carried out by Leeds City Council and the Environment Agency after the Christmas 2015 floods to determine the comprehensive level of protection needed through a full catchment approach. 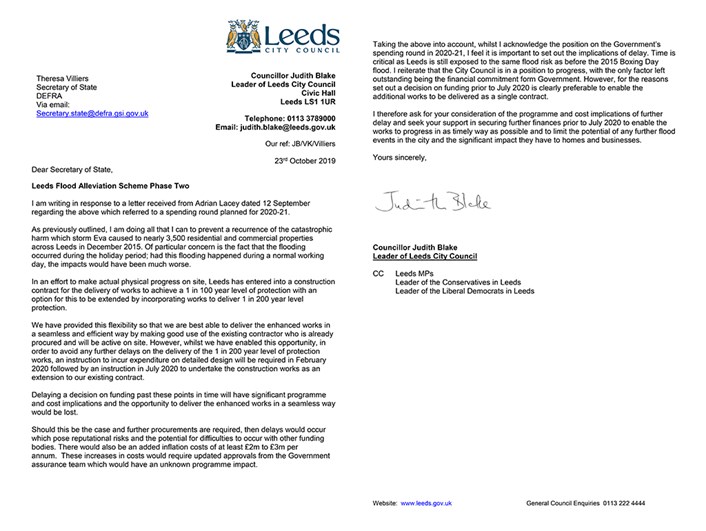