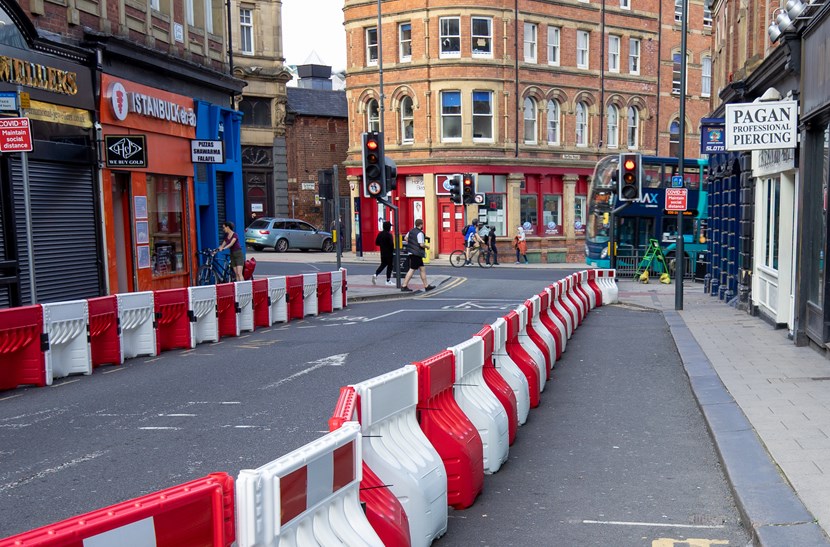 Consultation starts on next phase of emergency walking and cycling plans

Leeds City Council is calling for further views on the new emergency walking and cycling plans in the city as part of its response to Covid-19.

An initial round of public consultation which began in May and ended earlier this month saw more than 25,000 contributions received from over 4,500 respondents. Following analysis of the views and comments received, further proposals are now being put forward for consultation.

These include creating active travel neighbourhood schemes in Hyde Park, Holbeck, Lincoln Green, Chapeltown, Beeston and Otley. These provide safe streets with more space for walking and cycling. The schemes will prioritise the movement of people, by closing roads to through traffic and to help deter ‘rat-running’ through highly-populated areas.

Next week will see the installation of the fast-tracked pop-up cycle scheme along the A65 Kirkstall Road to the city centre. Views are also sought on the ambitious 100 kilometres of new trial cycling routes, including the A660, A61 Wakefield Road, A58 Roundhay Road and Roseville Road. These will also see trial interventions using ‘wand orcas’ (semi-permanent bollards attached to the road) to physically separate the space for cyclists and traffic.

Social distancing measures already undertaken by the council include barriers to widen pavements in the city centre and across town centre locations to provide space around shops. Six school streets pilots began on 1 June, restricting traffic movements outside of schools during drop off and pick up times.

Due to the response to the first round of consultation the ‘suggest a scheme’ via the city map will still be available and further phases of work may be planned based on replies to develop the future Connecting Leeds transport strategy.

The council will develop this work under the ‘safe streets, save lives’ campaign, in direct response to the funding bid on 5 June to the Department for Transport, from £2.5million allocated to the region via the West Yorkshire Combined Authority.

“I would like to thank the thousands of people in Leeds who provided tremendous feedback to our first round of consultation. This is a clear demonstration of the high levels of interest in measures to support walking and cycling across Leeds. Your comments are helping to inform the council’s ambitious plans and we’re grateful for your local insights and your time.

“In response to your feedback, the council has now laid out its ambitious plans to promote active travel. This includes an additional 100 kilometres of segregated cycle lanes, temporary widened footways and active travel neighbourhoods.

“Ward councillors have also been consulted on these schemes. We’ve listened and responded by taking action to implement active travel neighbourhoods, where people have said it will help reduce cars and deter rat-running in their streets, making it safer for walking and cycling.

“The council’s aspiration is to make cycling and walking for shorter journeys a natural everyday travel choice. This starts by giving people the space they need over motorised vehicles to keep safe on our streets, whether on their bike, wheel chair, push chair or on their own two feet. Only when people feel safe, will they enjoy the convenience of active travel, which will support their own health and wellbeing.

“I’m excited to see the A65 Kirkstall Road first pop-up cycling scheme implemented next week, along with the other identified cycling and active travel neighbourhood schemes to come forward quickly. We need to create momentum to achieve our long-term ambition of 800kms of segregated cycle routes to support much cleaner air and reduce the polluting traffic on our roads. All this will have huge public health benefits.

“I look forward to hearing your views, please take part in the consultation by visiting our commonplace website and get behind our efforts to have safe streets and to save lives.”

Widening pavements in the city centre