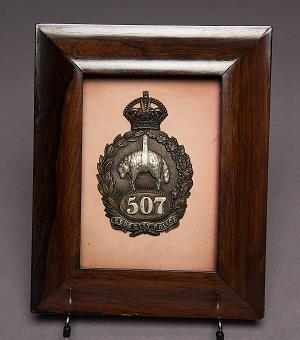 Like many of the objects on display in the city’s museums, the badge, which is currently at Abbey House Museum, has an intriguing tale to tell.

Thought to date from around 1895, shortly after Leeds gained city status, the badge was originally affixed to a policeman’s helmet.

Somehow, in the intervening 20 years, the helmet and its badge made their way to West Africa where, in 1916, the local District Commissioner’s office spotted it being worn by a local man.

The badge was promptly seized and returned to the chief of Leeds City Police along with a letter which read:

“Sir, I have the honour to enclose herewith a badge belonging to one of your Force which was found [on a man] here on the borders of French Haut-Senegal and Niger. It was on a policeman’s helmet which he was wearing, and which he stated he had bought in Coomassie market.

“I presume the helmet must have been sold in a pawnshop, but I thought the badges were always taken off. I have seen in a small trading store in Northern Transvaal a London and N.W. Railway guard’s frock coat for sale with the company’s buttons still attached.”

What happened to the man caught with the badge is not known but the helmet itself was not returned, so he may have been allowed to keep it.

“Interesting and unusual stories like this bring our exhibits to life for visitors and help to capture their imaginations.

“There’s almost always more than meets the eye when it comes to the objects on display at our museums and by exploring those stories, people get the chance to learn more about how diverse our local history really is.”

The badge is on display in the Crime and Punishment exhibition at Abbey House until the end of December 2016.