Object of the week- Day of the Dead items 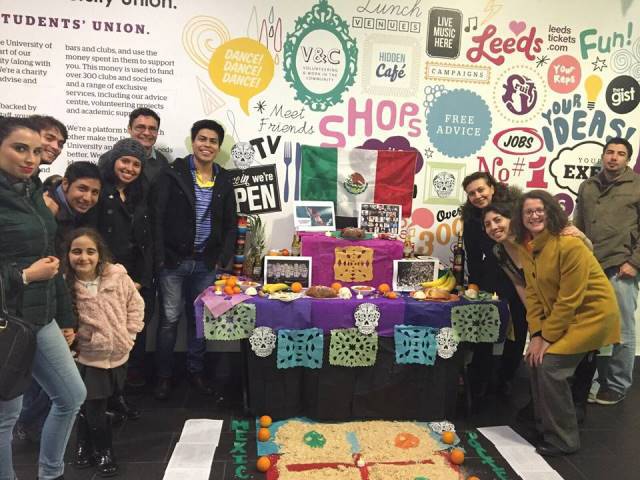 On display as part of an exhibition exploring the themes of death and dying, this selection of colourful mementos came to Leeds from Mexico’s vibrant Day of the Dead celebrations.

Mexico’s world-famous festival sees families welcome back their dead on the 1st and 2nd of November, with special altars built at home, visits to cemeteries with food and candles and a huge parade.

The collection on display in Leeds City Museum’s Dying Matters exhibition includes a model altar made of printed cardboard, orange paper carnations, a special sugar cake and a sugar coffin with a pop-up skeleton head.

The objects were brought to Leeds by Lourdes Parra Lazcano, Mexican PhD student at the University of Leeds, where the Mexican Students Society holds its own annual Day of the Dead celebrations.

Leeds City Museum’s Dying Matters display is made up of five cases at the contemporary end of the Leeds Story Gallery.

It looks at look at funerals, preparation for death, sorting the deceased’s effects, memorials and the afterlife, with objects on display including Anglo-Saxon urns, a 19th century funeral cart, Chinese ancestor tablets to African memorial figures.

Two new Leeds films have also been commissioned, one with interviews taken at St Gemma’s and Wheatfields hospices, and the other sharing the personal stories of five Leeds people.

A memorial book is also open to give visitors the chance to remember loved ones and leave their comments.

Councillor Brian Selby, Leeds City Council’s lead member for museums and galleries, said: “Death and dying is obviously a sensitive subject, but it’s also one that unifies people from different cultures and backgrounds from all over the world.

“By looking at the different ways both life and death are celebrated, we can gain a greater understanding of each other and also break the stigma around talking about what is a very important topic.”

Leeds Dying Matters Partnership recently won an award for ‘Dying Matters Awareness Initiative of the Year’ at the 2017 NCPC Awards.

The partnership was acknowledged for "recognising events and activities that raise awareness of the importance of talking about dying, death and bereavement."

Object of the week- Day of the Dead items