The remodelling of Leeds Station has taken a significant step forward today with the appointment of world-renowned development experts to lead the next phase of the project, including the lead architect behind the redevelopment of King’s Cross in London.

The Atkins consortium, made up of a group of leading global design, engineering and project management consultants, has been awarded a contract to develop the masterplan which will guide the revamp of Leeds Station into a distinctive modern destination and fully integrated national transport hub.

The group includes Hiro Aso, Gensler Head of Transport & Infrastructure, who was the lead programme architect on the award-winning revamp of King’s Cross Station in London which drew widespread acclaim.

The bold ambition set out by Leeds City Council and partners is for Leeds station to become a key national landmark and transport interchange featuring high-speed rail, as well as being a pivotal regeneration and economic driver and asset for the city and region. The redevelopment of the station is expected to provide approximately 13,000 new jobs in Leeds.

Leeds Station is already a vital piece of national infrastructure being the busiest station in the north of England used by over 100,000 passengers a day, with those numbers forecast to more than double over the next 30 years reaching a level similar to Gatwick Airport. To help bring that about in the coming years rail capacity into Leeds is to benefit from longer trains and more frequent services, resulting in a 52% increase in the number of seats in the morning peak on TransPennine Express trains and a 40% increase in the number of passengers that can be carried on Northern trains. Outdated pacer units will also be withdrawn by 2020.

The Atkins consortium is made up of industry specialists Atkins, Gensler, Bilfinger GVA, Faithful + Gould, Albion Economics and BAM Construction. Major transport schemes the companies have worked on include King’s Cross Station as well developments at Euston Station, Birmingham New Street, Bond Street Station and Crossrail as well as projects connected to Heathrow Airport, Glasgow Airport, Wembley Stadium, Twickenham and The Shard. They were also part of the design team which created the venues and visitor facilities for the London 2012 Olympic Games and Paralympic Games.

Internationally they have worked on transport infrastructure projects in the USA, Canada, South Africa, Abu Dhabi, Qatar, Australia, Norway and Sweden, while more locally in Leeds they constructed the first direct arena, designed the new Leeds Station Southern Entrance and among their current projects is the redevelopment of Merrion House.

For Leeds Station (also now referred to as the Yorkshire Hub), the group is tasked with developing the current masterplan into a blueprint to guide all improvements in the short, medium and longer terms. This includes how to incorporate high speed rail services from HS2 and the proposed Northern Powerhouse Rail– sometimes known as HS3 – together with national, regional and local transport services in a user-friendly single hub station promoting all forms of connectivity.

Improved access for cars, taxis, buses, public transport, cycling and walking will also be part of the plans, along with examining options for a common concourse offering easy access between high-speed rail and other services. This could include how to make best use of areas surrounding the station, such as the Dark Arches undercroft.

In addition they will work on adding further detail as to how to maximise the commercial opportunities offered by the redevelopment of the station for the city and region, as well as it being an attractive and welcoming focal point, destination and gateway to the rest of the city centre and beyond.

They will also be tasked with ensuring the new station design reflects the unique character of Leeds as well as integrating it with the broader South Bank regeneration and the plans to make Leeds city centre more pedestrian-friendly.

An updated station masterplan featuring the work by the Atkins consortium is likely to be completed by next summer.

“We are delighted to be able to announce the Atkins consortium as our partners in developing the exciting masterplan for Leeds Station, which we want to be a statement of our ambition and determination as a city and region to create a distinctive world-class modern transport hub, economic driver and attractive venue and destination in its own right.

“Their wealth of experience working on major projects around the world and locally is exceptional, so we look forward to working with them and seeing the ideas they come up with. I would like to praise the very strong partnerships we have in place on this project in terms of civic, business and transport leaders. We are all firmly committed to delivering the same thing – a new Leeds Station which will be a gamechanger for us as a city and region and something for us all to be proud of.”

“Our team will be a true partnership, combining each company’s unique expertise to deliver an integrated masterplan that will create a real and positive impact on Leeds as a city and as a key hub in the Northern Powerhouse. By integrating the new HS2 station into Leeds’ existing mainline station and the surrounding area, we’ll help create a 21st century station - a fantastic space to travel, live and work.”

“With HS2 and Northern Powerhouse Rail and train travel having such an important role to play in achieving the aims of our Strategic Economic Plan, Leeds Station will become a true transport hub for the city, the city region and the north as a whole.

“Having an integrated station at the heart of the city centre, providing an impressive gateway to Leeds, West Yorkshire and the City Region will transform travel for business and leisure travellers alike and I look forward to seeing the plans for the station’s future come to life.”

A new senior leadership group has also been created to help guide the station redevelopment planning. Chaired by Network Rail’s chief financial officer Jeremy Westlake, the group will act as advocates for the project as we all as offering their experience and guidance on the viability of the proposals put forward.

‘It is very encouraging to see the significant progress being made in Leeds to capitalise on the opportunities HS2 will bring to the region.

‘The arrival of HS2 services will significantly improve connectivity for people right across the region and it’s fitting that the modern railway we are creating is accessed via a first-class gateway in the heart of the city.’

The stakeholders involved in the redevelopment of Leeds Station include:

The organisations in the new senior leadership group are:

Leeds City Council is currently undertaking a transport conversation with everyone in the city to help guide the future of its transport strategy. Leeds Station has a key role to play in that strategy. To join the conversation visit www.leeds.gov.uk/transportconversation

The council is also currently consulting on proposals around the major regeneration of the South Bank area including Leeds Station, which would double the size of Leeds city centre. To take part in the consultation visit https://southbankleeds.co.uk/shapeyourcity

For enquiries on London and Continental Railways, please contact Hanna Smith on HS@londoncommunications.co.uk 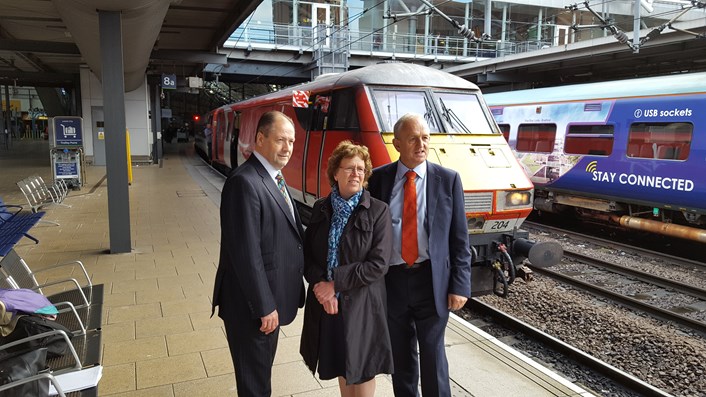