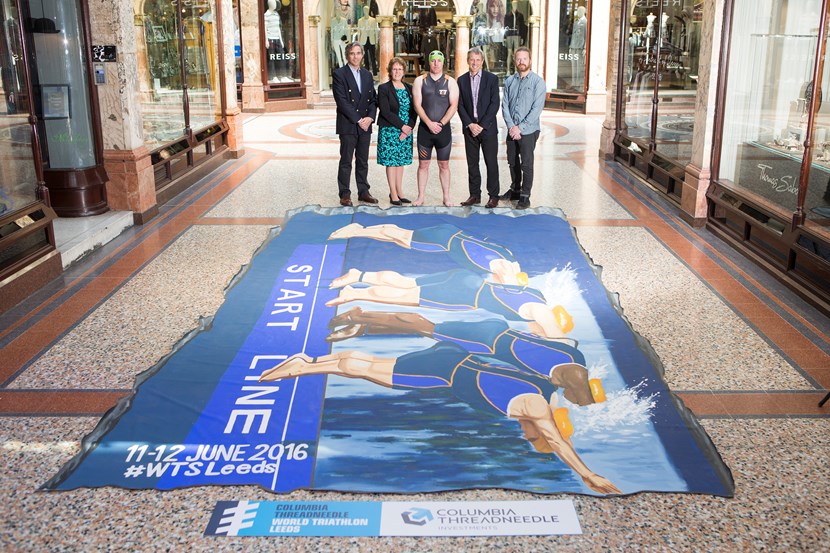 Leeds City Council Leader, Cllr Judith Blake, and organisers of the Columbia Threadneedle World Triathlon Leeds have made a ‘big splash’ in the city centre today, unveiling a jaw-dropping piece of triathlon-inspired 3D street art to mark one month to go until the international event takes place on 11 and 12 June.

Hosted in the city’s iconic Victoria Quarter shopping arcade, the spectacular 3D artwork, created by art collective Media Gang, will be available for the public to engage with from today until Monday 15th May.

Inspired by the open water swimming phase of the triathlon at Roundhay Park, the show-stopping 3D street art creates the illusion of the ground opening up to reveal a glimpse of the Waterloo Lake pontoon, with triathletes diving off and disappearing into the water - giving shoppers and passers-by a taste of what to expect on the weekend of the event.

Bringing the triathlon to life, organisers are encouraging the people of Leeds to ‘dive in’ and follow the footsteps of local heroes and Olympic medallists Alistair and Jonathan Brownlee, by posing with the interactive artwork, for a fun and quirky picture opportunity.

Alongside the art installation, retailers in Leeds are also showing their support by celebrating the month to go mark. A series of triathlon themed activities have been organised to get the city buzzing with excitement in anticipation of the UK leg of the ITU World Triathlon Series coming to Leeds.

Swimming caps will be popping up in shop windows across the city, while three life-size sculptures, including a swimmer, a cyclist and runner made entirely of Lego, will be appearing in Trinity Leeds, the Victoria Quarter and The Light, this month courtesy of global property consultant JLL, an official sponsor of the event.

Leader of Leeds City Council Councillor, Judith Blake, said: “The excitement is building as Leeds gears up to welcome the very best triathletes in the world next month. June 12th is a not to be missed date for the diary and I know the residents of Leeds will be out in force to cheer on our Leeds-based athletes.

“This piece of street art looks very striking and captures the drama and excitement of the start of the race. Over the next three days this work of art will be a visitor attraction in its own right, so I would encourage as many people as possible to see it for themselves to get in the mood for the big day.”

Jack Buckner, Chief Executive of British Triathlon, said: “The Columbia Threadneedle World Triathlon Leeds is yet another major international sporting coup for the city of Leeds. We hope the impressive art installation and triathlon-inspired activity popping up across the city this weekend will give people a taste what’s to come next month and build excitement across the city as the countdown begins. We hope to see everyone dive into the action.”

Rupert Pybus, Global Head of Brand and Marketing at Columbia Threadneedle Investments, said: “The triathlon is a month away and marks the start of an exciting summer of sport. The course is set to attract the world’s best athletes as well as many enthusiastic amateurs and we are thrilled to be Title Sponsor of this prestigious event.”

The much-anticipated Columbia Threadneedle World Triathlon Leeds, which is part of UK Sport’s National Lottery-funded #EveryRoadtoRio event series, will provide the British public with the opportunity to watch leading GB triathletes battle for glory against some of the world’s best triathletes in their last race on home soil ahead of Rio.

The Columbia Threadneedle World Triathlon Leeds, organised by British Triathlon in partnership with Leeds City Council, also provides 5,000 recreational triathletes with the unique opportunity to compete on the same course as the elite athletes from around the world across a range of different distances, suitable for first timers’ right through to experienced triathletes. A limited number of entries are still available for both the Saturday and Sunday events – for more information please visit: http://leeds.triathlon.org/enter_now/. 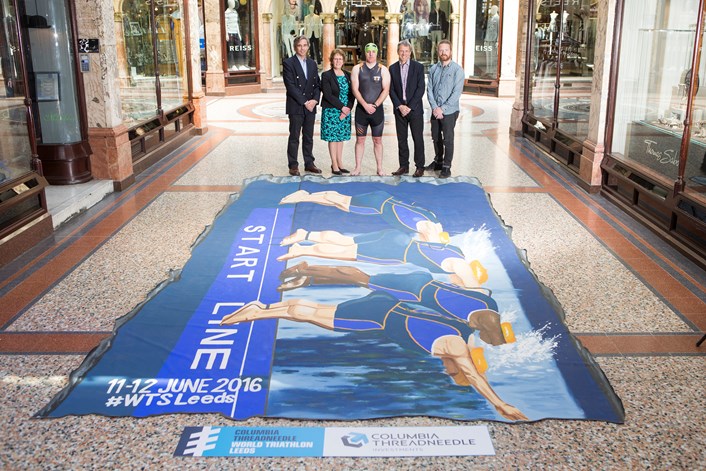