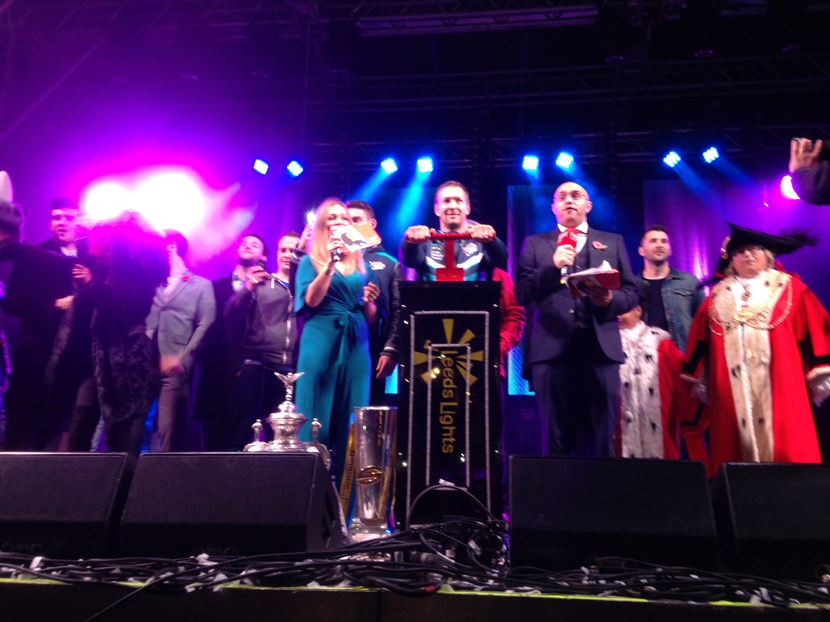 Stars from the world of sport, stage and screen helped a crowd of thousands get into the festive spirit at tonight’s spectacular Leeds Christmas lights switch-on.

Around 15,000 people packed into Victoria Gardens for a memorable show, with Leeds Rhinos hero Danny McGuire given the honour of officially switching on one of the UK's largest displays of city centre festive illuminations.

Danny, who was man of the match when the Rhinos secured an historic treble at Old Trafford last month, said: “It was a great honour to switch on the Christmas lights and it’s capped off an incredible year for myself and the club.

“Helping to kickstart the countdown to Christmas is also the perfect way for us to show how grateful we are to the people of Leeds for the amazing support they’ve given us this season.”

Also on stage for the big switch-on were Danny’s fellow Rhinos Stevie Ward and Josh Walters as well as the three trophies won by the team this season.

Collabro’s Richard Hadfield said: “It’s been a fantastic night with such a brilliant atmosphere and we’ve really enjoyed entertaining the crowd and helping all these people get in the Christmas spirit.”

Bupsi added: “It’s been a real privilege for me to be back performing in my home city, there’s nothing like a Leeds crowd and it’s amazing to be part of kicking off the countdown to Christmas for everyone here tonight.”

Also part of the line-up were Cbeebies presenters Alex Winters and Cat Sandion, who led the crowd in a fun version of The 12 Days of Christmas and Lee Brennan from boyband 911, who is playing the title role in this year’s production of Aladdin at Carriageworks Theatre.

The spectacular Leeds Rock Choir also performed some fantastic hits along with a Christmas medley including original vocal arrangements.

And the cast of Chitty Chitty Bang Bang, who are appearing at West Yorkshire Playhouse appeared on stage along with Breeze has Talent 2015 winners The Richards.

The evening’s entertainment was hosted by Dixie and Emma from Heart Breakfast.

“It’s been a wonderful evening with some terrific guests and I think the crowd really go into the spirit of it and enjoyed themselves.

“Seeing all these people coming together here tonight and joining in with the songs has been a fabulous start to the festive season.

“It was particularly special for us to be able to pay tribute to Danny McGuire and the Rhinos, whose accomplishments this season have been one of the highlights of the year and something the whole city can be proud of.”

Tonight’s Leeds Light switch-on marked the official start of the city’s Magical Leeds campaign which will feature a number of special events and activities including the annual Christkindelmarkt on Millennium Square, which officially opens tomorrow (Friday, Nov 13). 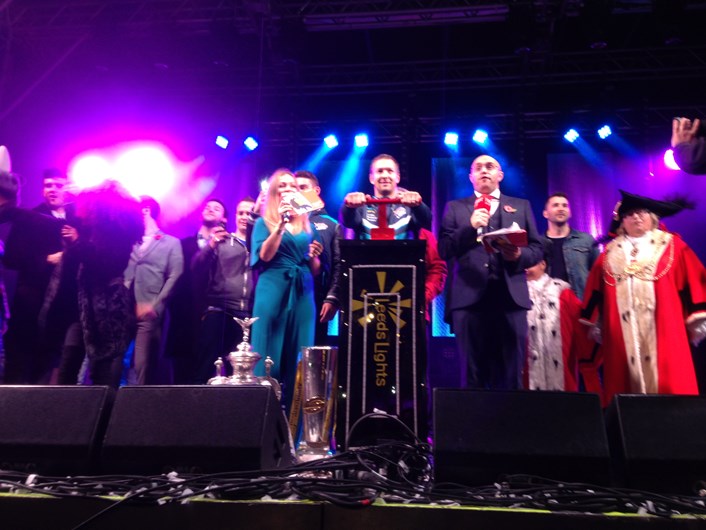