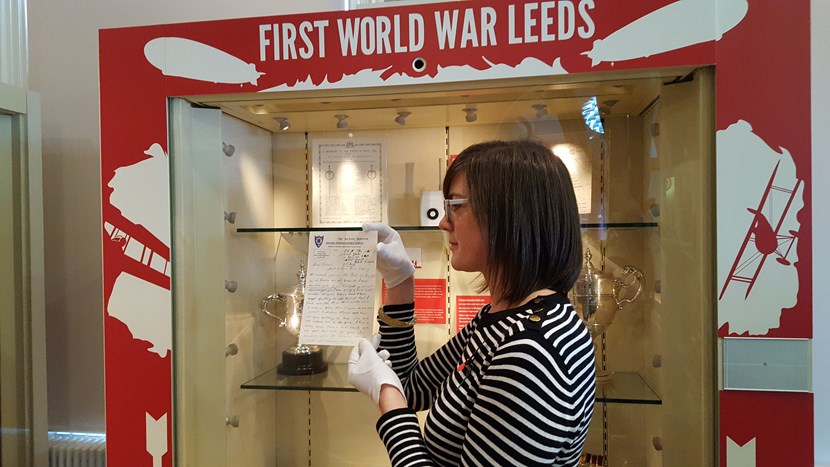 A teenage soldier’s final letter home from the front lines of the First World War is going on display in Leeds ahead of Remembrance Sunday.

Horace Iles was just 14 when he signed up to fight with the famous Leeds Pals in 1914, lying about his age so he could enlist, like many other boys at the time.

On May 25, 1916, Private Iles wrote to his sister Florrie from France, where he was stationed, saying: “Just a few lines hoping to reach you in the best of health as it leaves me at present, I was discharged from hospital about two days ago. I am sorry I have not written to you before but I had kept putting it off but at last I have written.”

He adds: “Well Dear Florrie how are you getting on hope you and the nipper are in the pink, I had a letter from Alice a bit back and she sent her love to you also wanted you to know she is still at dressmaking.”

It was the last letter his family would ever receive as, five weeks later, he was tragically killed on the first day of The Battle of The Somme at the age of 16.

Florrie’s reply arrived at the front two days after he was killed, and was returned to her unopened.

This weekend, as the city prepares to mark Remembrance Sunday, Private Iles' letter will go on display for the first time after it was discovered by a private collector.

David Owen, who lives in Lincoln, had been researching the Leeds Pals for several years and found the precious correspondence amongst a box of First World War related documents and papers he recently purchased.

He contacted the museum to see if the letter could be displayed to commemorate the sacrifice of Private Iles and his fellow servicemen.

He said: “To me, Horace Iles epitomises all that was good about the Leeds Pals; patriotism, loyalty, bravery, comradeship and sacrifice.

“Horace had lied about his age to join the Pals but, despite appeals from his family, refused to declare his true age as he preferred to remain and fight with his comrades rather than be sent home to safety – such was the ‘boy’ and the bond of the men in the Leeds Pals.”

He added: “Many hundreds from the three battalions were either killed, captured or physically and mentally wounded, or both.

“Many families in Leeds and other towns and villages around the country were left without a father, husband, son or brother, or had to cope with someone who was severely wounded and unable to lead a normal life.

“We owe them our admiration and gratitude.”

Private Iles’ letter will be on display in the museum’s Collectors Cabinet and will be available to view following this weekend’s Remembrance Sunday commemorations.

It has been installed by the museum’s Leeds Pals Volunteer Researchers alongside other items recognising the extraordinary bravery of the local soldiers who fought and died.

They include a never before seen photo of Leeds Pal Jogendra Sen, who was denied the rank of officer because of his race, alongside other items from the Leeds Pals collections.

The Battle of the Somme resulted in the worst losses of British Army personnel during the First World War and was one of the bloodiest battles in human history.

The Leeds Pals, a volunteer battalion, was hit especially hard and of the 750 members who fought that day, just 72 were uninjured by nightfall.

Councillor Brian Selby, Leeds City Council’s lead member for museums and galleries, said: “This is a remarkable and poignant insight into the human cost of war and the devastating impact it had on the soldiers who fought so bravely and the families they left behind.

“At this time of year, as we commemorate the sacrifice of those who laid down their lives, this is a fitting tribute and a moving addition to Remembrance Day in Leeds.”

The Lord Mayor of Leeds Councillor Jane Dowson will lead the tributes on Remembrance Sunday, laying a wreath at the war memorial on Victoria Gardens.

A procession will leave Leeds Civic Hall at 10.50am and finish at Victoria Gardens where a number of wreaths will then be laid.

This will follow ex-service men and women plus members of ex-service organisations and current serving military organisations gathering outside Leeds City Museum before marching to the war memorial at 10.30am. 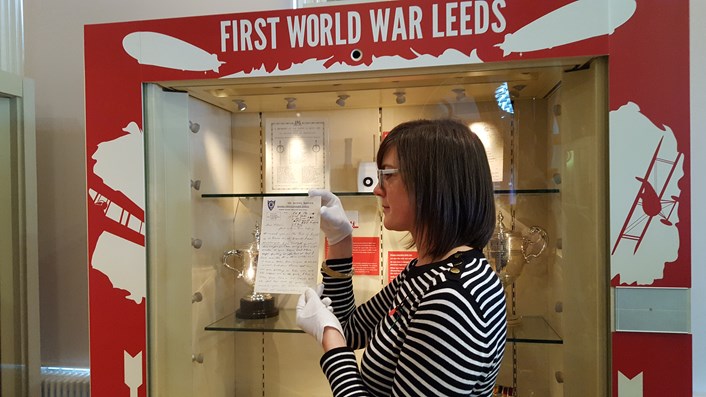