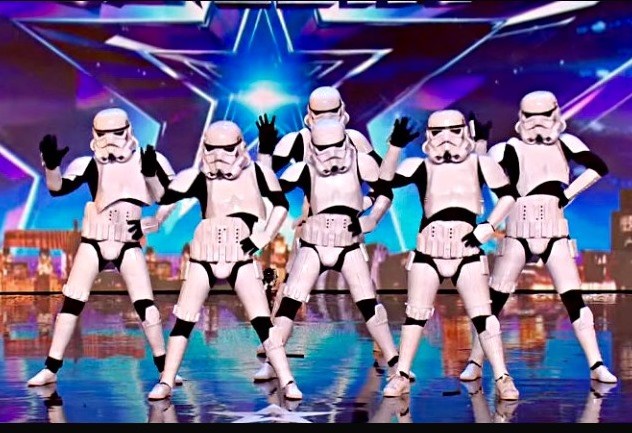 Stormtroopers set to whip up a ‘Boogie Storm’ ahead of Star Wars: The Force Awakens screenings on Millennium Square

Britain’s Got Talent stars ‘Boogie Storm’ are once again set to don their iconic Stormtrooper outfits and strut their stuff on a popular city square later this week ahead of two special screenings of Star Wars: The Force Awakens.

The dance group will be hoping that the force is strong with them on Friday 29 July when they perform before both the matinee and evening screenings of the blockbuster, which is offering the audience a unique outdoor cinema experience in a specially constructed fully seated auditorium with a large state of the art LED screen installed on the main stage in Millennium Square.

With guests at both showings also getting the chance to come dressed up and have their picture taken with characters from the iconic films, this promises to be an event not to be missed for anyone who loves Star Wars.

The screening of Star Wars: The Force Awakens, is just one of four iconic movies to be shown on Millennium Square from Wednesday 27 July as part of ‘The Film House on the Square’ programme, put together by Leeds City Council, Leeds Film and Sneaky Experience. Also on offer will be legendary musical ‘Grease’, Superhero spectacular ‘Avengers Assemble’ and the James Bond classic, ‘SkyFall’.

Kicking off the festivities will be Grease on July 27, where visitors will have a chance to travel back to Rydell High and sing along with Danny and Sandy.

As well as grabbing an American style burger from ‘Betsy’ a converted big Yellow high school bus, guests can also have a photo taken in the photo booth and have a go on a couple of traditional old fairground attractions.

Next to be given the full outdoor cinematic experience is superhero spectacular Avengers Assemble, which will hit the big screen on July 28. Don’t miss out on chance to interact with some of the costumer characters before watching Iron Man, Captain America, The Hulk, Thor, Black Widow and Hawkeye in action.

Movie-lovers are encouraged to come dressed as their favourite characters, with prizes for the best costume.

Gates open at 1pm, with the film starting at 2pm.

Tickets cost £6 for adults and £5 for children (12 and under) and concessions.

James Bond fans can also join the gentleman spy that evening for a showing of Skyfall, which also including cocktails, a mobile casino and an appearance by an iconic Aston Martin, is sure to leave guests both shaken and stirred.

“The screenings of these four fantastic films are a welcome addition to our rich cultural offer and will be given the full cinematic experience in an intimate fully seated auditorium on our very own Millennium Square this week.

“This promises to be something really unique, and we are delighted to announce that before both showings of Star Wars: The Force Awakens, Britain’s Got Talent stars Boogie Storm will also be performing for the crowd.

“With Grease, Avengers Assemble and the James Bond classic SkyFall also featuring on the programme, don’t miss on your chance to experience the magic of outdoor cinema on Millennium Square.”

“We are really looking forward to coming to Leeds for our first exclusive performance in the city, and we are really excited about performing on the stage in Millennium Square before two special screenings of Star Wars: The Force Awakens.

“Everyone loves Star Wars and we have been overwhelmed by the phenomenal pubic response following our appearance on Britain’s Got Talent. We recently had the privilege of attending the wrap party of the new Star Wars film ‘Rogue One’ due out later in the year where we got to meet some of the cast old and new including John Boyega and Mark Hamill.

“The outdoor cinema experience in Leeds sounds a lot of fun and a great day out for all the family, and we hope that our appearance will help create a brilliant atmosphere in the crowd before the film begins.”

Sneaky Experience will also be hosting a series of morning themed activities for younger children (aimed at 6 and under) to tie in with the film screenings including a mini-superheroes, interactive superhero experience and a space Kids – interactive space themed experience

Tickets for all film screenings go are available to purchase online at www.leeds.gov.uk/filmhouse or in person / by telephone from City Centre Box Office in Leeds Town Hall (0113 376 0318).

The Film House on the Square is part of the Millennium Square Summer series of live concerts and events which also includes; A Classical Summers Evening featuring performances by Joe McElderry, Laura Wright & Jennifer pike together with the Manchester Camerata on Saturday 30th July, The Magic of Motown Under the Stars on Friday 5th August, back by popular demand following last year’s sell out show and this year featuring performances by Clem Curtis of The Foundations and Xfactor’s semi-finalist Che Chesterman, and Summer Sound Leeds of Saturday 6th featuring two separate concerts including Top Loader and The Hoosiers early afternoon and Bewitched, 911, S Club Party and Damage in the evening.

The programme closes on Sunday, August 7 when the square will host the Parade Stage for the annual Leeds Pride celebrations.