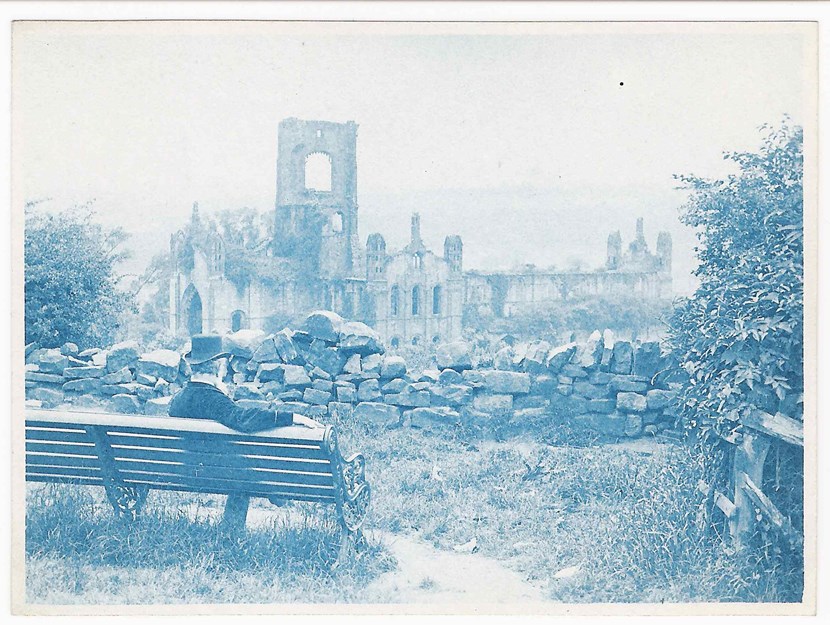 But more than 130 years before Kim Kardashian and Justin Bieber were breaking the internet, renowned astronomer and inventor Washington Teasdale was taking Leeds’s very first selfie in the ruins of Kirkstall Abbey.

The ground-breaking image is on display as part of Leeds to Innovation, a new exhibition at Leeds Industrial Museum which explores the stories of some of the city's leading thinkers throughout history.

Teasdale, a polymath and pioneer in fields including naturalism and engineering, captured the historic image in 1883 using a type of photography called cyanotype, which is still used today to create architectural blueprints.

His eye-catching picture is not only one of the earliest examples of someone both taking and appearing in a photo, it also documents a moment in the life of one of the city’s most astonishing minds.

After working in India as a civil engineer on the railways in the 1850s, where he also became fluent in Hindustani, Teasdale returned to Leeds and chaired the Leeds Astronomical Society where he pushed to recruit more female members. The society is still active today.

Also a member of The Naturalist Society he invented his own field microscope to study insects and pushed the boundaries of photography to capture detailed images of the moon through his telescope.

An esteemed lecturer on a variety of topics, he was highly regarded in Leeds as an expert on everything scientific, living in his house on Hyde Park Road which was filled with a scientific apparatus and works of art.

Chris Sharp, Leeds Museums and Galleries’ assistant community curator, said: “Washington Teasdale had a truly remarkable mind and seemed capable of reaching astonishing heights of inventiveness and ingenuity in whatever field he brought his prodigious intellect to bear on.

Among the fascinating innovators who feature in the exhibition are Leeds University graduate Denys Fisher, who used his engineering background to produce Spirograph. Denys experimented with Mecanno parts to perfect his new game which won the ‘Toy of the Year’ award in 1967.

Elizabeth Beecroft, known as Betty, who took over the running of the historic Kirkstall Forge in 1778 is also part of the exhibition. Betty revamped the forge, introducing new equipment and new business model and transforming it into a successful business.

Visitors will be able to find out about the stories of John Smeaton, the ‘Father of Civil Engineering’ and designer of the Eddystone Lighthouse as well as Dr Brian Boffey, whose experiment with hot gelatine created the popular sweet Jelly Tots.

A distinctive model of Scootacar, manufactured in the late 1950s by Scootacars Ltd, a division of the famous railway locomotive builder, the Hunslet Engine Company, is also on display.

Councillor Judith Blake, leader of Leeds City Council, said: “Leeds has a very long and proud history as a centre of innovation and progress stretching back hundreds of years.

“The pioneers who feature in this exhibition are among those who helped blaze a trail in a myriad of fields and industries, inspiring generations of scientists and engineers to follow in their footsteps and play their part in building the city we know today.”

Leeds to Innovation is open now at Leeds Industrial Museum.

For more details about the museum including admission times and charges, please visit: https://museumsandgalleries.leeds.gov.uk/leeds-industrial-museum/

Leeds Industrial Museum is housed within Armley Mills, a Grade II listed building which was once the worlds’ largest woollen mill. The galleries and collections tell the stories behind the industries which have shaped Leeds into the successful city it is today from weaving to steam engines and more. The textile galleries contain spinning wheels and working looms, offering insight into the wool and cloth industries which once made Leeds world famous. Tailoring galleries tell the tales behind how Leeds helped to launch high street fashion and Media in The Mill celebrates the historical importance of the creative industries, from film to photography and print making. Further museum spaces have been recreated and restored to their former glory including the Victorian school room and Mill Managers Cottage. The museum is also home to the Palace Picture House, a twenty-four seat 1920s cinema which screens family films and vintage classics throughout the year.