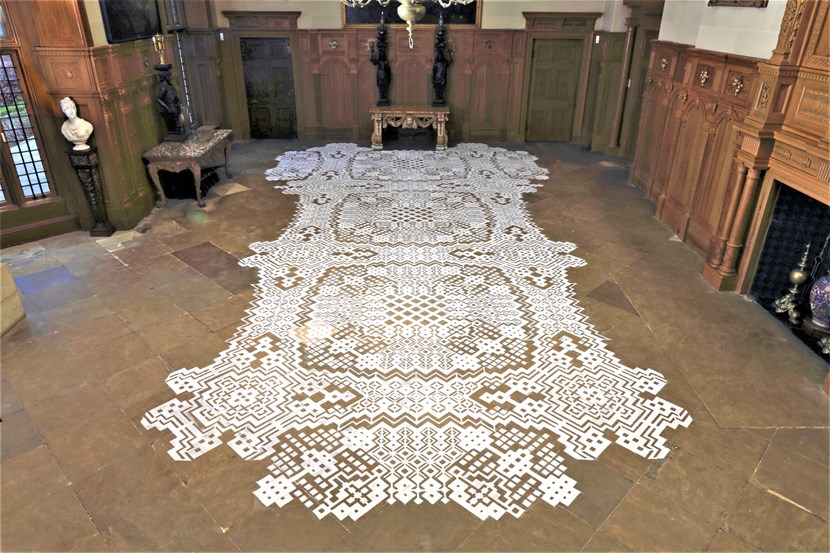 Stunningly intricate patterns made using millions of grains of salt have transformed the great hall of Temple Newsam House for a new exhibition celebrating the mansion’s history.

Artist Catherine Bertola has reinterpreted the story of the stunning Tudor Jacobean building’s unique architecture and its generations of residents as she brings Below the Salt to the house to coincide with its 500 year anniversary.

Using salt to replicate the beautiful design of an early piece of woven table linen, over the past few weeks the artist has meticulously crafted a series of large scale temporary pieces across the floor of the majestic hall.

Salt was considered a status symbol in the days when Temple Newsam was home to some of the country’s most prominent of aristocratic dynasties.

The patterns form part of a wider exploration of social status and the different ways the house has been occupied over the course of its history, both by those who lived there and by the staff who worked behind-the-scenes to keep the mansion moving.

Catherine said: “Throughout January I have been working with four volunteers to create a large temporary installation on the floor of the Great Hall. The work involved using table salt to draw the pattern of one of the earliest linen tablecloths in Temple Newsam’s collection.

“The work references the original 16th century use of the space as a dining room, a period when salt was a valuable commodity and only offered to people of a certain status. This is where the phrase, and title of the exhibition, Below the Salt originates. The salt will be swept away at the end of January and photographs of the installation alongside other artworks will be on show at the house.”

The completed artworks have been photographed before the resulting images are developed using a salt and silver technique, a traditional method of producing photos first popularised in the mid-19th century.

The photos will be displayed at the house for the exhibition, alongside an original house inventory from 1520 which has been a key part of Catherine’s research.

A further series of sculptural works will also be located around the house highlighting some of the materials and techniques involved in the production of the estate’s impressive collection.

The exhibition will also include a specially choreographed performance in a hidden tunnel which connects the house’s North and South wings and which enabled staff to go about their work unseen.

Below the Salt will be at Temple Newsam House from April 4. For more details, visit: https://museumsandgalleries.leeds.gov.uk/temple-newsam/

Temple Newsam house showcases over 40 interiors and one of the most important collections of fine and decorative arts in Britain which were designated as being of pre-eminent importance in 1997 (the first country house to be recognised in this way). It is a treasure house of outstanding collections including furniture, ceramics, textiles, silver and wallpaper.

The house captures over 500 years of history and this is key to the visitor experience. The house is brought to life by telling the stories of the people who lived and worked there, through all art forms including digital, music, theatre and fine art.

The collections show how the house was used as a family home, which was once birthplace to Lord Darnley, notorious husband of Mary Queen of Scots. 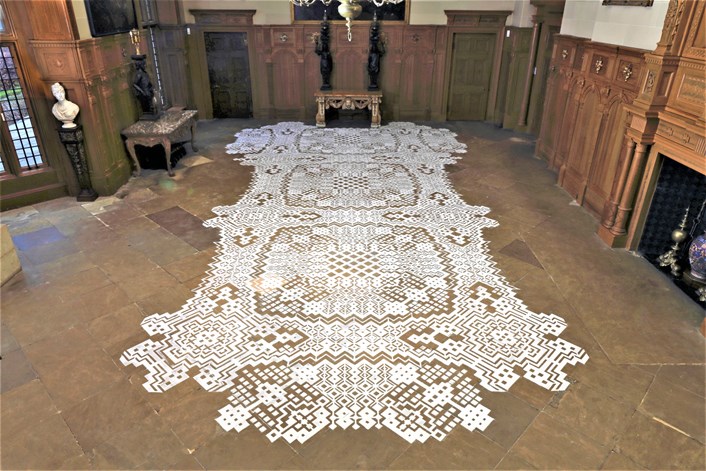