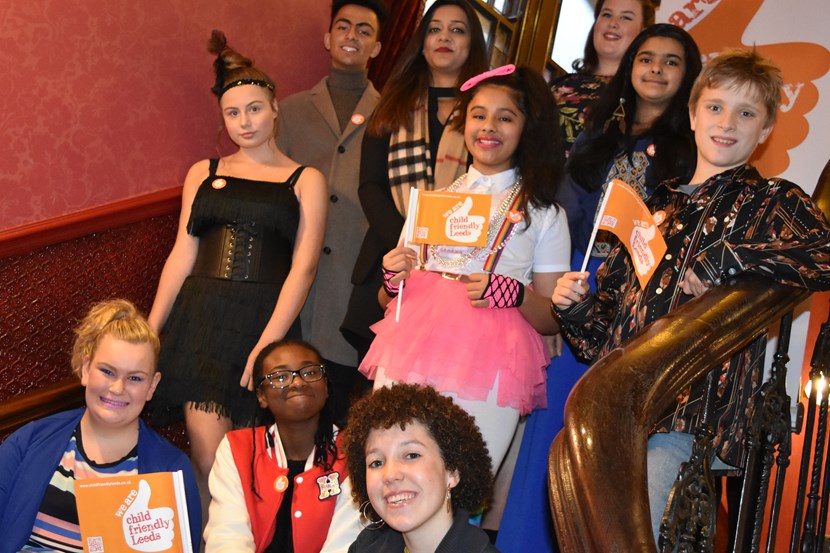 The names of the people, places and organisations shortlisted for the 2018 Child Friendly Leeds Awards have now been revealed.

The winners will be officially announced at a prestigious awards ceremony, being organised by Team Ten & Co, a group of young people, which will be held at Leeds City Varieties on 1 February.

There were an astounding number of nominations received for the fifth annual city-wide Child Friendly Leeds awards. This made selecting the shortlist an extremely difficult job for the awards judging panel. Seven winners will be chosen from the 35 nominees on the shortlist.

The ceremony begins at 7pm and there will be an opportunity to film, photograph and interview the winners from around 8.30pm. Filming and photography during the awards ceremony and performances is also permitted.

Spaces are limited so please contact emma.whittell@leeds.gov.uk to arrange attendance.

“We would like to thank everyone who took the time to nominate for these awards. We were amazed by the sheer number and quality of nominations received and touched by the commitment and hard work shown by all those who have been nominated.

“There are some fantastic people, places and organisations committed to making Leeds a better city for children and young people and it’s great that we are able to celebrate their work, through the Child Friendly Leeds Awards.

“What a wonderful way to recognise just some of the work being done across the city to improve the lives of children and young people that goes some way towards making Leeds a child friendly city.”

The prestigious awards ceremony is being organised by a group of ten young people who make up Team Ten & Co. The team, some as young as twelve, are busy making the final preparations for the ceremony, which will be watched by an audience of nearly 400 people, including a number of city leaders, VIP and supporters.

“We’re absolutely committed to our partnership with Child Friendly Leeds, and are proud to sponsor the fifth annual CFL Awards. Young people are our future and we have to do all we can to enable them to thrive.”

The individuals, groups and organisations that have been shortlisted in each of the seven categories are:

Communities and Schools Working Together

Fuel for School and The Light

Inspiring Creativity Through Arts and Culture

Best Place in Leeds for Children and Young People

Child of the Year

Taylor Aitcheson a local tennis star, decided that he wanted to give back to the community and chose to do this by helping to raise awareness of Candlelighters.

Liam Wilson attended the Ariana Grande concert at Manchester Arena and has undertaken various challenges to help raise money for those affected in the attack.

Isabella Jackson has been a young carer and also supports other children in her school to feel included.

Jake Frood suffers from juvenile arthritis and hypermobility syndrome but is the youngest 1st, 2nd and 3rd Degree Black Belt in the world.

Ryan McMullen was born with one hand but he does not let his disability stop him from doing what he wants in his life.

Young Person of the Year

Sophie Chapman is a young person who is an inspiration to members of the Rainbows, Brownies and Guides, as well as her local community.

Chloe Tear created a blog to raise awareness about what life is truly like having Cerebral Palsy www.cpstudentblog.blogspot.co.uk

Kayleigh Glancy has saved her pocket money and raised money for the last 6 years to help provide chocolate eggs and gifts for children at Easter and Christmas.

The Lionesses are a group of young women whom have experiences of child sexual exploitation (CSE) and now support their peers and work with professionals.

Young Dads Collective (YDC) North is a collection of young men who became fathers while of school age – they formed a group to support one another and to influence best practice.

Full details of the awards, including Team Ten and the shortlisted candidates, can be found on the Child Friendly Leeds website: http://www.leeds.gov.uk/childfriendlyleeds/Pages/Child-friendly-Leeds-awards.aspx

For more information about the awards ceremony please follow @Child_Leeds on Twitter and use the #ChildFriendlyLeedsAwards hashtag.

Leeds City Council and its partners are working to make Leeds to be the best place for children and young people to grow up in. To find out more about what is happening and how to get involved, people can visit http://www.childfriendlyleeds.co.uk