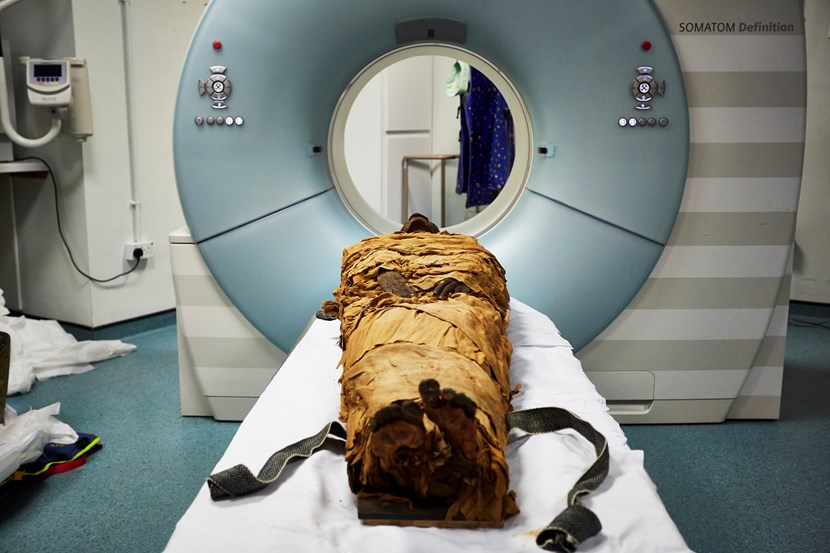 An ancient Egyptian priest who spoke his final words more than 3,000 years ago has been given a new voice thanks to a ground-breaking research project.

The sound of Nesyamun, whose mummified remains are on display at Leeds City Museum, has been recreated following seven years of work by academics at Royal Holloway, University of London, University of York, and Leeds Museums and Galleries.

Using precise measurements taken using detailed Computed Tomography (CT) scanning of the mummy, the team of experts was able to create a 3-D printed version of his vocal tract.

The printed replica then enabled them to accurately synthesise the vowel sound Nesyamun would have made during his life, meaning the once high-ranking Egyptian priest, incense-bearer and scribe can now be heard for the first time in more than three millennia.

They also used a CT scanner at Leeds General Infirmary to check to see if the significant part of the structure of the larynx and throat of Nesyamun remained intact.

Katherine said: “Nesyamun is one of the most well-know and recognisable exhibits in our entire collection, and generations of visitors have been captivated by both his fascinating story and his incredibly well-preserved remains.

“This remarkable research project and the pioneering technology and ingenuity it has employed means we can actually hear a sound from Nesyamun for the first time in 3,000 years. There is so much potential for us to connect with him and understand his life in a way which at one time we never would have thought possible.”

Nesyamun lived during the politically volatile reign of pharaoh Ramses XI (c.1099–1069 BC) working as a scribe and priest at the state temple of Karnak in Thebes - modern Luxor.

Because of his status, he was permitted to approach the statue of Amun, Egypt’s chief state god, in the sacred inner sanctum of Karnak’s sprawling temple.

The cause of Nesyamun’s death is unknown, but it has been suggested that he may have died following a severe allergic reaction.

His voice was an essential part of his ritual duties which involved spoken as well as sung elements. Ancient Egyptians believed that ‘to speak the name of the dead is to make them live again’.

Professor David Howard from Royal Holloway, University of London, said: “I was demonstrating the Vocal Tract Organ in June 2013 to colleagues, with implications for providing authentic vocal sounds back to those who have lost the normal speech function of their vocal tract or larynx following an accident or surgery for laryngeal cancer.

“I was then approached by Professor John Schofield who began to think about the archaeological and heritage opportunities of this new development. Hence finding Nesyamun and discovering his vocal tract and soft tissues were in great order for us to be able to do this.

“It has been such an interesting project that has opened a novel window onto the past and we’re very excited to be able to share the sound with people for the first time in 3,000 years.”

Professor Joann Fletcher of the Department of Archaeology at the University of York, added: “Ultimately, this innovative interdisciplinary collaboration has given us the unique opportunity to hear the sound of someone long dead by virtue of their soft tissue preservation combined with new developments in technology.

“And while this has wide implications for both healthcare and museum display, its relevance conforms exactly to the ancient Egyptians’ fundamental belief that ‘to speak the name of the dead is to make them live again’.

“So given Nesyamun’s stated desire to have his voice heard in the afterlife in order to live forever, the fulfilment of his beliefs through the recreation of his voice allows us to make direct contact with ancient Egypt by listening to a voice that has not been heard for over 3000 years, preserved through mummification and now restored through this pioneering new technique."

The research is published by Nature.

Nesyamun’s mummified remains as well as his decorative outer coffin, painted with scenes from the famous Book of the Dead, can be seen in the Ancient Worlds gallery at Leeds City Museum.

Images and interviews are available.

Royal Holloway, University of London, is ranked in the top 20 universities in the UK[1]. Through world class research that expands minds and changes lives, the dedication of our teachers and the feel of the Royal Holloway experience, ours is a community that inspires individuals to succeed academically, socially and personally.

The university was founded by two social reformers who pioneered the ideal of education and knowledge for all who could benefit. Their vision lives on today. As one of the UK’s leading research-intensive universities we are home to some of the world’s foremost authorities in the sciences, arts, business, economics and law. We are strengthened by diversity, and welcome students and academics who travel from all over the world to study and work here, ensuring an international and multi-cultural perspective within a close knit and historic campus.

Leeds Museums & Galleries is the largest local authority-run museum service in England and has one of the larger and most significant multidisciplinary collections in the UK. They care for 1.3 million objects which they use to inspire, educate, entertain and challenge the people of Leeds and visitors to the city. They run nine historic sites and visitor attractions, welcoming close to 1.7 million visitors each year, accounting for around a quarter of all museum visits across Yorkshire.

Leeds Philosophical and Literary Society acquired Nesyamun in 1823, the only mummified body securely dated to the reign of Ramses XI (c.1099-1069 BC). He was the first mummy in the world to be subject to a multidisciplinary scientific investigation, published in 1828, and he survived the direct hit on the museum during the Second World War which destroyed all of the other mummies in the collection.