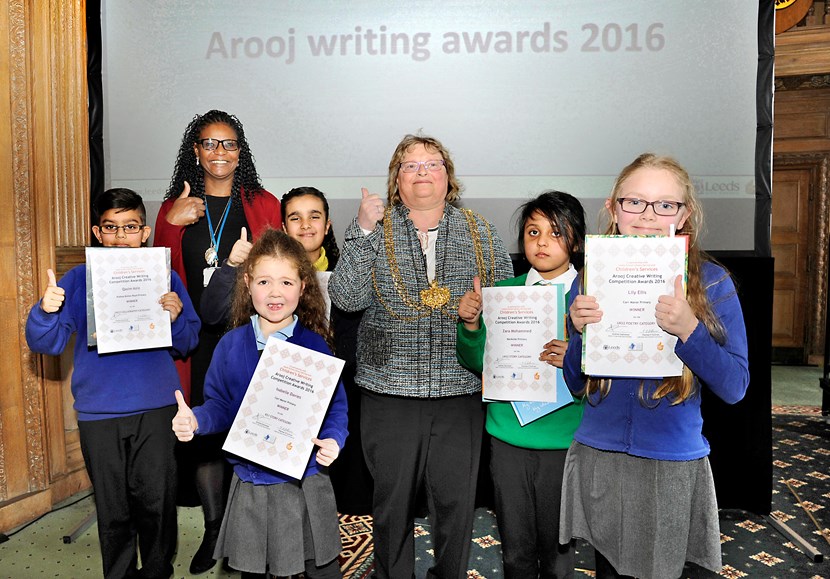 Pupils who have been taking part in a creative writing competition were awarded for their poetic and literary efforts at a civic ceremony last week.

Hundreds of children from primary schools across the city submitted entries into the Arooj creative writing competition, with 27 pupils being short listed as potential winners. The winner in each category, poetry, story and calligraphy, was announced at a special ceremony at Leeds Civic Hall.

The competition, which is in its sixth year, is organised by Leeds City Council’s Inclusion team and is part of a project which aims to increase attainment in pupils of Pakistani and Bangladeshi heritage. The aim of the Arooj project is to work closely with primary schools with the largest populations of these pupils to help to close the gap in attainment.

“Well done to everyone who entered the competition, there are a lot of talented young people in Leeds. A lot of hard work has gone into creating these lovely poems and stories and they are a credit to the pupils and their schools.

“We want all children in Leeds to perform to the best of their ability. Projects like this make education fun, interesting and relevant for pupils whose attainment and attendance may be low, and encourages them to look at their own heritage and community as a source of creativity.”

Entertainment was provided by pupils from Arooj schools and included singing from the CHESS schools choir and a performance of an extract from Romeo and Juliet by pupils from Rosebank PS. Peter Chand, a renowned story-teller who has worked with the pupils during the year also entertained the audience with his riotous stories.

Pakistani and Bangladeshi heritage pupils are the largest ethnic minority group in Leeds comprising 6% of the total school population. Attainment levels for these pupils is below their peers both in Leeds and nationally, however the gap in attainment has narrowed in recent years due to the hard work of the schools involved in the Arooj collaborative.

The Inclusion team have developed a creative curriculum project with a focus on Muslim heritage, which has had a dramatic impact in terms of engagement and motivation of pupils and parents as well as increasing attainment and attendance.

The team has also been developing school to school support between the 12 schools involved in the project so that they can benefit from each other’s expertise.

The winners of the 2016 Arooj creative writing competition are:

Examples of some of the winning poems:

If I were a doctor

I would work day and night

To make sure no one feels bad

Or drop their tears and feel sad

Even though I will go mad

Whenever someone asked them

Who did this to you?

They cried and said it was him who was bad

Who made all of us children so sad

And made us forget about ourselves really bad

If I were a doctor

I would save all the people in the world

And never let someone die with a disease

Lonely at the top of the steep mountain I sit,

Plumes of smoke billowing from the top,

the fire I control is more than just hot.

I leave a blackened trail of molten jagged rock,

Smash, bang, boom its nothing but a shock!

The smell of acrid sulphur fills the poisonous air,

you will be paralyzed in fear and stand in despair.

Run away now, you won’t even get a chance to weep,

this scorching beast has awoken from a deep long sleep.

If I were you

I would think twice,

before you ruin a person’s life.

Do you think before you speak

to the ones you see as weak?

Do you care that they feel isolated,

or the fear leaves them devastated?

We are all special in our own way,

You have no right to try and take that away.

You make us feel inadequate and blue

Everyone is beautiful and not what they seem,

But you are a bully, malicious and mean.