Object of the week- memorial plaque

Carved by a soldier in memory of his fallen comrades, this small, simple plaque tells a powerful story about the lives of soldiers in the First World War.

The plaque is made out of chalk and is believed to have been fashioned by Private N.Nelson, a serviceman who fought in the trenches during the Great War.

The inscription on the plaque says it was made in memory of Private Thomas Atkins of the 20th Battalion Yorkshire Regiment, who was killed in 1916.

Thomas Atkins was a name given to any British soldier, later shortened to Tommy, so the plaque may have been carved in memory of an individual, unnamed soldier or as a tribute to all those who lost their lives during the conflict.

The plaque is currently on display at Leeds City Museum as part of the moving In Their Footsteps exhibition, which explores the impact the First World War had on people living in Leeds.

The exhibition was curated by member so Leeds Museums and Galleries’ Preservative Party, a group of young curators.

Member Jordan Keighley, who chose the object, said: “The plaque is not made out of stone or marble by the British government after the war, but out of chalk by a soldier fighting in the trenches who is perhaps commemorating a lost friend.

“This object gives us an insight into the private thoughts of the men on the front line in how they coped with the trauma and grief of losing friends and companions.”

Councillor Brian Selby, Leeds City Council’s lead member for museums and galleries, added: “Looking at this plaque conjures up a powerful image of a soldier who wanted pay tribute to his fallen comrades in any way he could.

“It is a moving and emotional gesture which brings home just how profoundly the war affected those who fought so bravely.” 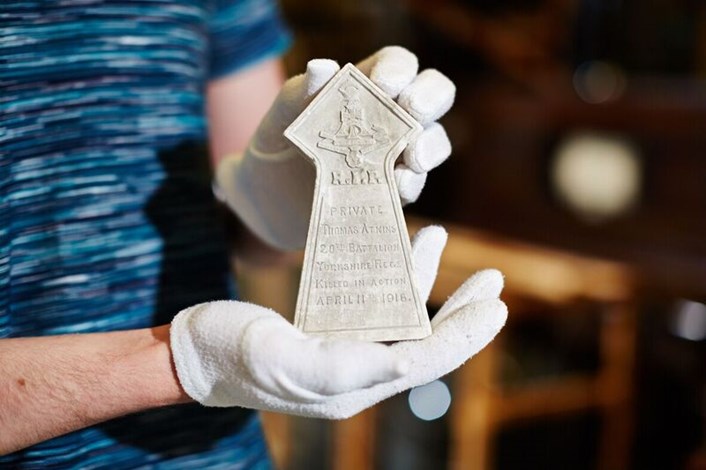