A new phase of public consultation on measures to help transform transport and travel in and around Leeds has started this week.

Connecting Leeds has now opened a public consultation on proposals to expand the 1,000-space bus park and ride site at Temple Green, in east Leeds. There will also be consultation on plans around improvements on Beckett Street between St James’s University Hospital and the city centre.

In December, the Council’s Executive Board approved plans to buy land, to provide an extra 400 parking spaces at Temple Green park and ride. Connecting Leeds has now developed these plans for public consultation.

Opened just two years ago, Temple Green park and ride has proved successful and is over 85 per cent full at peak times. At current growth levels it will reach maximum capacity before the end of this year. Temple Green is served by ultra-low emission Hybrid Electric buses, helping improve air quality by removing more cars from the roads going into the city centre.

Outside the city centre, the city bound bus stop opposite St James’s University Hospital is the busiest stop in Leeds. Previous consultation plans for nearby Beckett Street and Burmantofts Street (on the Oakwood to Leeds route), found most people agreed bus services were often delayed and unreliable. They supported the proposals to introduce improvements to benefit bus users, cyclists and pedestrians.

The updated proposals can reduce bus journey times by up to six minutes at peak times. Making bus journeys more reliable and attractive for the 10,000 people who use buses that travel on this route each day.

Together these two schemes will help increase public transport use, in line with the council’s target of doubling the number of bus users in ten years. In addition, the schemes will also improve local air quality and encourage active travel.

For Beckett Street a public drop-in session at St James’s University Hospital will take place from 2pm - 7pm on 9 July.

The public can give their views on both schemes (Temple Green and Oakwood to Leeds) via the website www.leeds.gov.uk/Connecting%20Leeds until Friday 2 August.

“Park and ride is a key part of our Connecting Leeds transport strategy for the city. After only two years, I’m pleased to see Temple Green park and ride is already a success and is growing to take more cars off the roads into the city centre. It shows that by working together with bus operators providing new, cleaner, bus services, people are finding it a better alternative to travelling by car into the city centre. It’s also a cheaper way to travel for families, with children travelling free from park and ride with a paying adult.

“The Beckett Street proposals offer more pedestrian crossings, wider footways, and improved cycling facilities to promote better sustainable travel options for people to use. After declaring a Climate Emergency it is more important than ever that we consider how transport schemes contribute to cleaner air and encourage walking, cycling and public transport use as more sustainable forms of transport. I look forward to seeing what people think and encourage you to have your say.”

“In the two years since it opened, Temple Green park and ride has been used around ¾ million times. Park and ride in Leeds has been a huge success with people having used the Temple Green and Elland Road services to make almost 2.5 million journeys on ultra-low emission buses.

“Between them the two sites are responsible for removing the congestion and pollution of around 9,000 car journeys from the city centre’s streets every week and this proposed extension at Temple Green along with the soon-to-start expansion at Elland Road will increase that figure significantly.”

The vision set out for Connecting Leeds is to deliver a transformational step change in the transport network and connectivity in Leeds and the wider region. It’s aiming to help and support bringing people, places, jobs, learning and leisure closer together. This will be achieved through improvements to road, rail, bus, park and ride, cycling and walking services and infrastructure, reducing congestion and improving air quality and accessibility in Leeds along with utilising the latest technology innovations. 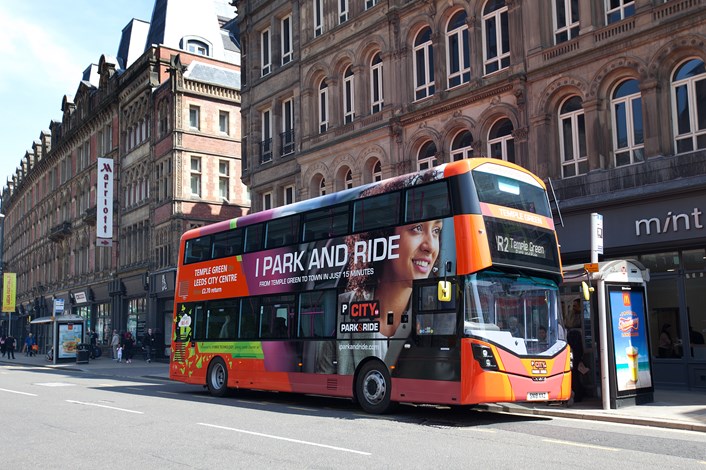