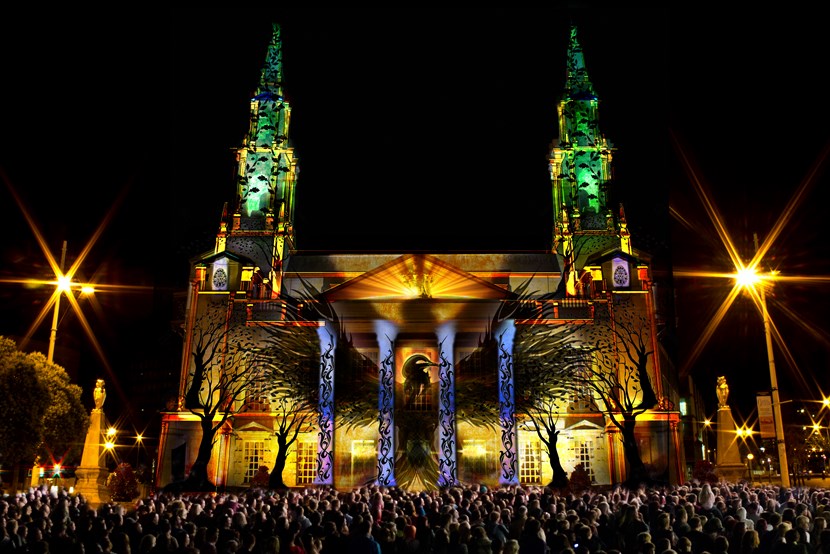 A spectacular illuminated phoenix will spread its wings across the Civic Hall during next month’s incredible Light Night Leeds 2016.

The dazzling display, entitled The Phoenix in the Stone, will be one of the showpiece events at this year’s celebration, which for the first time ever will see an exciting programme of installations and performances taking place across the city over two nights from October 6-7.

Projected across the front of the iconic building, the gigantic mythical bird will represent the coming together of four elemental forces, symbolising the different parts of Yorkshire working together, with Leeds at their heart.

The installation is the brainchild of brothers Rob and Matt Vale, whose company Illuminos were behind the hugely-popular Momentous display on the Civic Hall at 2014’s Light Night.

Rob, who studied in Leeds, said: “We created Momentous in Leeds a few years ago, and were interested in returning to the same building with a completely different approach.

“We wondered what it might be like to try to create a piece that was like a storytelling, a shadow play piece, almost intimate and made for families to share, but played out as a huge spectacle at the same time.”

Rob and Matt will now work with a larger team to bring the display to life, using special effects, high powered projectors, speakers and music by award-winning composer John Rea.

Rob said: “Creating the animations for a project like this takes weeks of work. It’s a very gradual process of building up many hundreds of elements across different layers, then animating all of these into a single narrative.

“We can’t wait for the festival- it’s full on with the edit process right up to the day, but as I went to university in Leeds I have a real love for the city, so we want to create something that will be remembered well after the event.”

Organised by Leeds City Council in partnership with the LeedsBID (Business Improvement District) and supported by Arts Council England, this year’s event will be split over the two nights, with more than 50 events outside and in venues across the city centre.

Thursday night will feature a host of events for families, including a triathlon-themed procession with a beautiful water-themed lantern parade, a trail of cyclists adorned with lights, and a family-friendly fun run as well as a forest of 90 giant, lit dandelions on Merrion Gardens.

Friday’s expanded programme will see local and international artists transforming locations around the city, including The Falls, a 100ft digital waterfall on Queens’ Hotel, and Today, a ground-breaking music and light project in the Trinity Leeds shopping centre.

More details of further events will be revealed in the coming weeks.

Councillor Judith Blake, leader of Leeds City Council, said: “Light Night is one of our city’s most popular and exciting cultural events, welcoming thousands of people of all ages from across Leeds, who come together at the heart of the city and play their part in what is always a unique collective experience

“Year after year, Light Night continues to raise the bar, making arts and culture engaging, accessible and fun and creating some unforgettable images and memories which last throughout the year.

“This year more than ever, as our bid to be European Capital of Culture 2023 gathers pace, we want Light Night to really lay down a marker for what culture means in Leeds, showcasing just how passionate and excited we are to be a city where innovation, art and creativity can shine so brightly.”

Andrew Cooper, Chief Executive of LeedsBID, said: “Light Night is a shining star in the city’s cultural calendar and illuminates Leeds in spectacular fashion. It was one of the first events LeedsBID became involved with and we are delighted to continue to financially support this event and to assist practically, extending its audience, appeal and people’s overall enjoyment.”

Other events at Light Night this year will include:

The performance will feature mysterious characters composed of light and sound entertaining the audience as well as the Spark! LED drummers.

Large cut out steel shapes created by Caribbean artist, Aragorn Dick- Read which will be set alight as night sets in.

The beautiful sculptures will feature intricately cut designs of dancing figures, entwined in with a focus on the oppositions faced by culture and the elements.

A huge, three dimensional installation by digital artists Squid Soup which will float in the middle of

Leeds Dock. The incredible piece will be set to a water inspired soundscape, and made up of 6,000 lights which will pulsate and change colour.

The audience will be taken on an audiovisual journey where time and space is bent upon itself, creating a new dimension inside the structure and guiding the viewers through the four elements.

Created by Tom Dekyvere the installation will show the fusion and obstruction of geometric patterns that grow in and through one another.

The structure symbolizes the flow and growth of a plant, taking over the city in search of light.

It aims to question the balance between the human adaptation and digitalization of our natural environment. 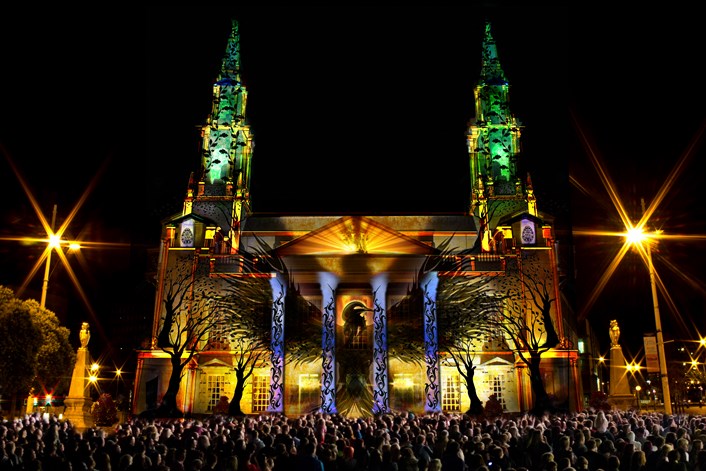