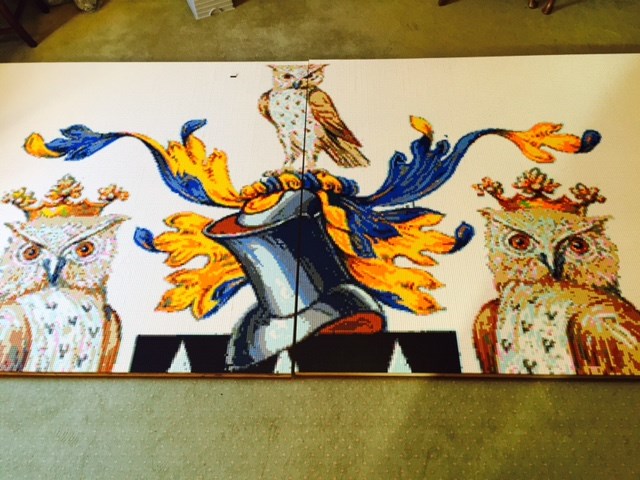 Visitors to a popular shopping centre during half term can add their support to an exciting fundraising challenge by the Lord Mayor of Leeds which is aiming to create a gigantic city crest made entirely out of Lego bricks.

Following on from visits to the White Rose Centre and the Merrion Centre, the crest will be on display at Trinity Leeds from Wednesday 17 February - Sunday 21 February and shoppers of all ages will again have the opportunity to help bring the crest to life, which thanks to the generous donations of so many people is moving ever closer to completion. Displayed on a specially designed 3.5m x 3.5m board, visitors will be able to purchase a variety of small Lego bricks at Trinity Leeds for a nominal fee and then watch as master builders insert the pieces into the mosaic, which when completed will be made up of a massive 200704 bricks including 26 different colours of which only one is violet!

With all donations from the project set to be given to the Lord Mayor’s chosen charity this year, Specialist Autism Services, a selected number of bricks can be purchased by the public for just £1 (four bricks) or £4 (16 bricks with option to place pieces on 4x4 plate), and there will even be the chance for businesses, groups, organisations or well-wishers to make sure their name and logo is stamped on the crest by buying a section of bricks at a cost of either £256 (one Lego Baseplate compromising of 1024 bricks) or £512 (two Lego Baseplates of 2048 bricks). For those who wish to donate online and purchase a brick on their phone, this can be done by texting LEGO42 to 70070 and putting the amount they wish to give after the pound sign from the four options available, i.e. LEGO42 then £1,4,256 or 512.

For further details and progress reports regarding the Lego crest project, please keep a close eye on the Lord Mayor’s official Twitter feed at @LordMayorLeeds for more details. Members of the public can also get involved in the conversation on Twitter by using the hashtag #leedslegocrest

“When we set out to create a copy of the Leeds crest made entirely out of Lego bricks it was certainly a little daunting, but thanks to the amazing generosity and support of the Leeds public I am delighted to say that the end is now very much in sight.

“A final big push is needed if we are to complete the crest by the end of my time in office, and I would like to offer a big thank you to Trinity Leeds who have very kindly offered their support by hosting the crest from Wednesday 17 February to Sunday 21 February, where again the public will have the chance to purchase their very own bricks.

“Every penny raised will be given to my chosen charity this year, Specialist Autism Services, and we cannot wait to see the challenge continue its memorable journey in Trinity Leeds during half term.”

“We can’t wait for the final pieces to be added to the Lego crest at Trinity Leeds. Even though the crest hasn’t been completed yet, its size is really impressive and is a piece of art in its own right. Charity donations often go unseen by the wider public, but this project is tangible, and really quantifies how generous Leeds residents have been. We encourage visitors to the centre to give generously so the final pieces can be added to the crest, all in aid of a really great cause.”