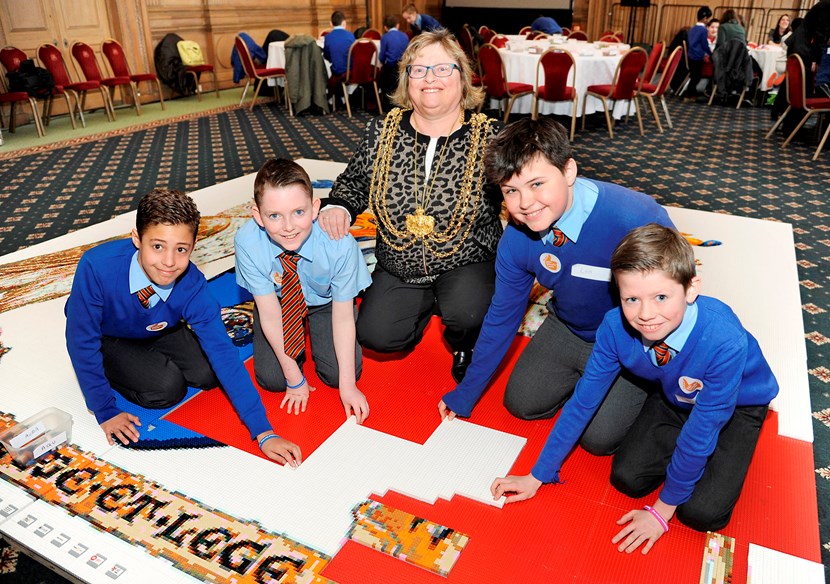 School children from across Leeds have added their support to an exciting fundraising challenge by the Lord Mayor of Leeds which is aiming to create a gigantic city crest made entirely out of Lego bricks.

Many schools in Leeds have been feverishly fundraising to help bring the crest to life, and as a special thank you, pupils were invited to Leeds Civic Hall this month to meet the Lord Mayor Councillor Judith Chapman, where they were also given the opportunity to add bricks of Lego to the mosaic.

The crest, which is displayed on a specially designed 3.5m x 3.5m board, will when finished, be made up of a massive 200704 bricks including 26 different colours of which only one is violet! All proceeds from the challenge will be given to the Lord Mayor’s chosen charity this year, Specialist Autism Services

The final brick on the Lego Crest is set to be inserted on the mosaic at the civic hall as part of a World Autism Awareness Day event on 1 April which the Lord Mayor will also be speaking at. Bricks can still be bought by the public for just £1 (four bricks) or £4 (16 bricks with option to place pieces on 4x4 plate), and there is the chance for businesses, groups, organisations or well-wishers to make sure their name and logo is stamped on the crest by buying a section of bricks at a cost of either £256 (one Lego Baseplate compromising of 1024 bricks) or £512 (two Lego Baseplates of 2048 bricks). For those who wish to donate online and purchase a brick on their phone, this can be done by texting LEGO42 to 70070 and putting the amount they wish to give after the pound sign from the four options available, i.e. LEGO42 then £1,4,256 or 512.

Also being held on April 1 is the Lord Mayor’s ‘Just One Day’ charity appeal. Whether it is organising a sponsored event, wearing fancy dress, donating a proportion of sales from an activity or undertaking a cake sale, people businesses, groups and organisations are encouraged on the 1 April to allocate ‘Just One Day’ of the year to help raise money for the Lord Mayor’s charity Specialist Autism Services. If you also let the Lord Mayor know what you are planning for ‘Just One Day’, there is also the chance that a special civic visit may be paid to your school, community group or workplace on the day!

“We have received some amazing support from so many schools and pupils in Leeds for our Lego Crest fundraising challenge, and it was only right that I gave them a big thank you in person for all their efforts. There was also the chance for the pupils to see how the crest was progressing and add some of their own bricks to the mosaic which really was great fun.

“While we are very close to completing the Lego Crest, there is still work to do if we are to reach our ambition of inserting the final brick at the World Autism Awareness Day event on April 1, which also is the date for my Just One Day appeal. The goodwill and help from the people of Leeds throughout my time as Lord Mayor has been unbelievable. Once again I am calling on their amazing generosity to help get us over the final hurdle in regards to the Lego Crest, and to spare whatever time they can afford on April 1 to take part in our Just One Day fundraising event.”

To find out more about ‘Just One Day’ or to make a donation, please see: www.leeds.gov.uk/justoneday

If you also want to tell the Twitter world what you are doing support the ‘Just One Day’ campaign or to find out more information, please use the hashtag #J1D16

For any further questions, or to let the Lord Mayor know what events you are planning for ‘Just One Day’, please contact: LordMayorsOffice@leeds.gov.uk