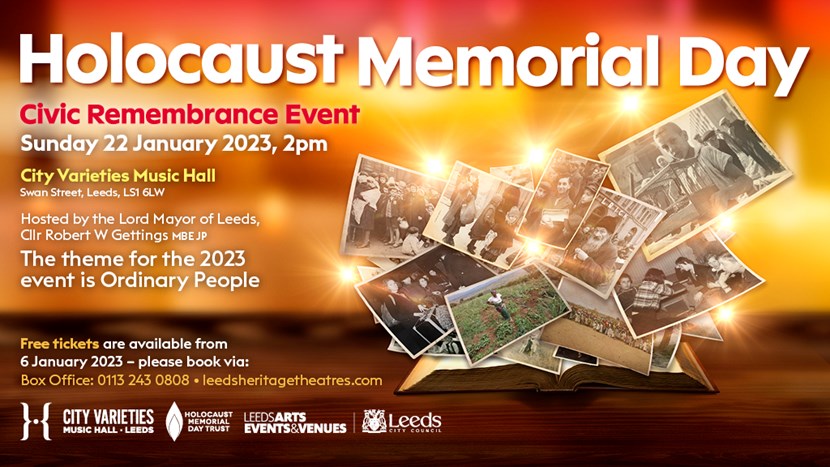 The Lord Mayor of Leeds, Councillor Robert W Gettings MBE JP will welcome the chief executive of the Auschwitz-Birkenau Foundation, Wojciech Soczewica to Leeds this weekend as the city holds its annual civic reception for Holocaust Memorial Day.

During his three-day visit, Mr Soczewica will deliver a keynote address at the Holocaust Memorial Day civic event being held at Leeds City Varieties on Sunday 22 January between 2-4 pm. Additionally, he will meet members of the Polish and Jewish community in Leeds, together with visiting the Holocaust Centre North in Huddersfield.

The annual Holocaust Memorial Day, which is themed ‘ordinary people’ this year, marks the anniversary of the liberation of the Auschwitz-Birkenau concentration camp in Poland in 1945.  People are asked to honour the victims of the Holocaust, and the genocides in Cambodia, Darfur, Rwanda, and Bosnia, and to help develop and participate in educational programmes to prevent future genocides.

Lord Mayor of Leeds Councillor Robert W Gettings MBE JP said: “Following my visit to Auschwitz in November last year, an experience that fully brings home the full horror, brutality, and inhumanity of the Holocaust, it was my great honour to invite Wojciech Soczewica to Leeds for Holocaust Memorial Day.

“We must never forget what happened in the Holocaust, or to the many thousands of Polish and non-Jewish people who perished in camps such as Auschwitz. Equally, we cannot forget the genocides perpetrated since the Holocaust, such as those in Cambodia, Rwanda, Bosnia, and Darfur.

“It is only by learning from the past, that we can build a better future for all. Therefore, it gives me great pleasure to be able to welcome Wojciech Soczewica to our city and strengthen our bonds with such an important research and educational organisation as the Auschwitz-Birkenau foundation.”

Leader of Leeds City Council Councillor James Lewis said: “Holocaust Memorial Day is an opportunity to stand with all the communities of Leeds to commemorate, educate, and fight discrimination of all kinds.

“It’s important that we use the visit of Mr Soczewica, and the learning he brings, to reflect on what action we can take now to stop such atrocities from happening in the future.”

The civic event will feature a video interview with Leeds-based Holocaust survivor, Arek Hersh MBE, a performance by Leeds Actors in Training (LAIT) inspired by the graphic novel Irmina, and music by Rabbi Alby Chait and the UHC choir.

The event at City Varieties Music Hall is free to attend but seats are limited.  Tickets can be booked via the Box Office at 0113 243 0808, or through leedsheritagetheatres.com/. 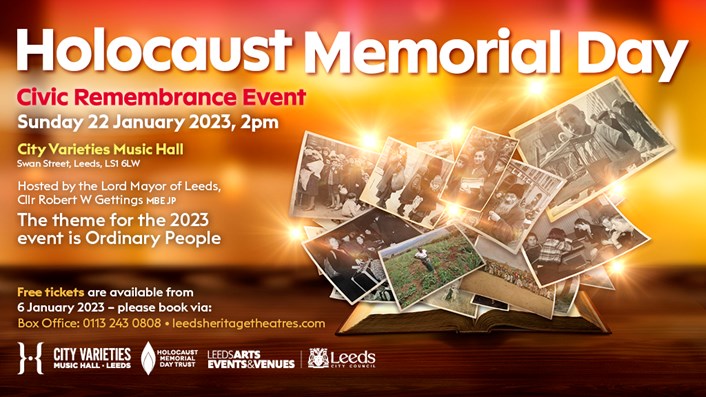