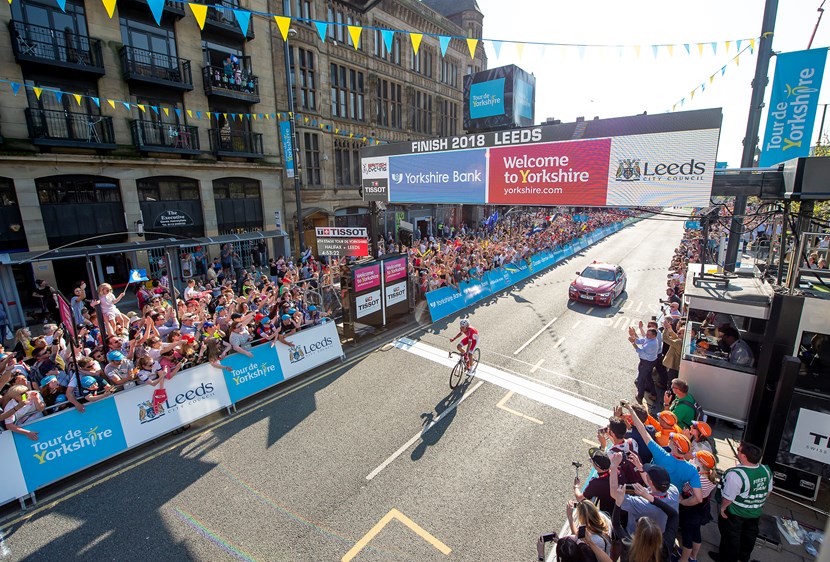 British champion Connor Swift, Commonwealth Games gold medallist Charlie Tanfield and Team Sky rider Chris Lawless were among the many professional riders in attendance along with a host of cycling legends such as Brian Robinson, Mandy Bishop and Denise Burton-Cole.

The fifth edition of the men’s race will take place between 2-5 May and has been upgraded to HC status by cycling’s world governing body the Union Cycliste Internationale (UCI) – the highest category possible for a multi-day race outside of the UCI WorldTour. It encompasses all four corners of the county and takes in 150 villages, towns and cities along the way.

The Asda Tour de Yorkshire Women’s Race meanwhile, will take place between 3-4 May meaning that for the first time ever, it will be held on a Friday and Saturday to allow more people to celebrate the race. Further new ground is also being broken by the fact both stages will be exactly the same as the men’s, meaning the 2019 edition will be the longest yet at 264km and also the hardest with over of 3,200m of cumulative climbing.

STAGE ONE: 178.5km – THE HERITAGE STAGE – DONCASTER TO SELBY Thursday 2 May

The men’s race will start in Doncaster before heading towards Beverley. On the way the riders will pass Cowick Hall and Howden Minster, and the first intermediate sprint will be contested in Elloughton before the peloton sweeps into Beverley. Not long after they will reach the Yorkshire Wolds and tackle the first classified climb at Baggaby Hill before a brisk descent into Pocklington for a second intermediate sprint. The pace will continue to rise on the brisk approach to Selby where the action will reach a pulsating conclusion right outside Selby Abbey which is celebrating its 950th anniversary.

The world’s top female riders join the action in Barnsley and start in the morning with the men following in the afternoon. Both exit Barnsley in a north-easterly direction and head towards Pontefract for the first intermediate sprint. The route then skirts Leeds and shortly after Leathley the peloton will commence the Côte de Lindley, the first of five new climbs on this year’s route. Then it’s on to Harrogate where the riders have the chance to tackle the exact same circuit being used at the 2019 UCI Road World Championships. An intermediate sprint has been added along Parliament Street where the Championships finish line will be, meaning the riders can hone their tactics in preparation for September. Once that loop has been concluded the stage continues north through Ripon and it’s full steam into Bedale for an expected bunch sprint in the centre of this vibrant Yorkshire Dales town.

The riders will roll out of Bridlington and head into the North York Moors National Park. The Côte de Silpho is looming large shortly after Hackness and the opening intermediate sprint comes just after Harwood Dale. The route then continues north and commences an undulating 52km loop just after Fylingdales. Once the peloton has passed through Robin Hood’s Bay they immediately hit the Côte de Hooks House Farm. Then it’s on to Whitby, and before the riders enter town they will contest a second intermediate sprint in front of Whitby Abbey. The views will be spectacular on the approach to Sandsend and it is there that the Côte de Lythe Bank is waiting. Once the riders have crested that summit the route heads inland and the Côtes de Grosmont and Ugglebarnby are positioned just 7km apart. The loop concludes, the pace is sure to be high as the riders drop into Scarborough. The frontrunners will sweep along South Bay, around the castle walls and onto the now-legendary finish along North Bay. It is here that the winner of the Asda Tour de Yorkshire Women’s Race will be crowned before the male riders battle it out in front of another massive crowd.

The Piece Hall is a spectacular location for the start of this decisive stage before the riders head into Brontë Country. Haworth’s quaint cobbled Main Street features once again but the real climbing begins on the Côte de Goose Eye. Crossing into Craven, the next classified climb comes on the Côte de Barden Moor. Once that has been crested it’s into the Yorkshire Dales National Park where the riders will contest their first intermediate sprint in full view of Kilnsey Crag. The Côte de Park Rash is the next climb on the agenda and before a gradual descent into Middleham, and the peloton will continue on to Masham before entering Nidderdale. Pateley Bridge is sure to put on a colourful show ahead of the Côte de Greenhow Hill, and shortly after Otley the final categorised climb will be fought out on Otley Chevin. The race then sweeps into the outskirts of Leeds for one last intermediate sprint in Tinshill. The riders will get a great view of Kirkstall Abbey before the action reaches a rip-roaring conclusion along The Headrow in the heart of the city centre.

Sir Gary Verity DL, Chief Executive of Welcome to Yorkshire, said: “We’re blessed with such a diversity of landscapes here in Yorkshire to create such challenging and exciting routes and we wanted the parcours to reflect that, showcasing the county in all its glory. There’s something for everyone; the sprinters will get their chance to shine while the classics specialists and climbers will also have opportunities to make their mark.

“With the UCI Road World Championships also taking place in Yorkshire next year, we’re expecting our strongest-ever field. This will be the only chance the riders get to sample the Harrogate circuit under race conditions before it, and the only chance they get to ride up Parliament Street against the usual flow of traffic.

“I’m also proud that we’re continuing to lead the way when it comes to promoting women’s cycling. Changing the start of the women’s race from Thursday to Friday should guarantee greater exposure and the routes for the two stages are now exactly the same as the men’s. That means there’s over 1,000m more cumulative climbing than last year and we’ll be in for some enthralling racing.”

Christian Prudhomme, ASO’s Tour de France Director, said: “Once again, the team at Welcome to Yorkshire have done a tremendous job in designing such a beautiful, challenging and varied route and I am looking forward to seeing how both races play out. Including the Harrogate circuit gives the race an added dimension next year and we want The Yorkshire Classic stage of the men’s race to become one of the most anticipated dates on the professional cycling calendar.”

Leader of Leeds City Council Councillor Judith Blake said: “I’m absolutely delighted that Leeds has been chosen to host the big finale of next year’s Tour de Yorkshire. Each year this exciting sporting event gets bigger and better and helps to put our region firmly on the map, both nationally and internationally.

“I’m sure people in communities across Leeds will once again create another brilliant and unforgettable atmosphere when the tour arrives next year.”

In the presentation Mackenzie Thorpe was announced as the official Tour de Yorkshire Artist for 2019. Thorpe, who hails from Middlesbrough, is one of the biggest-selling British artists of the last 30 years and will now begin work on a series of specially commissioned Tour de Yorkshire pieces which will be available in the New Year.

Sir Gary Verity DL said: “I have long been an admirer of Mackenzie’s bold and imaginative work. He is a hugely renowned artist with a world-wide following and we’re incredibly proud that he hails from Yorkshire. I’m looking forward to seeing his Tour de Yorkshire-themed creations for everyone to enjoy.”

Mackenzie Thorpe said: “I am thrilled and so proud to be the official artist for the 2019 Tour de Yorkshire. For the past 30 years I have painted these hills and dales, the sheep, the brooding darkness and the joyous light of our magnificent, awe-inspiring county.

“This race showcases all that is brilliant about Yorkshire and as the official artist I am determined to make sure that I honour the people and the places that I love so much.”

Mackenzie Thorpe’s official website can be found at https://www.mackenziethorpe.net

Continuing the theme of major announcements, Help for Heroes were named as the Tour de Yorkshire’s Official Charity Partner for 2019.

Help for Heroes provide recovery and support for all those and their families who have been affected by their time serving in the British Armed Forces.

The news signals the start of a range of fundraising initiatives throughout 2019 which aim to raise awareness of the great work the organisation does.

Sir Gary Verity DL said: “The work Help for Heroes do is truly admirable, and we are delighted to be partnering with them and raising money over the next 12 months for such a worthwhile cause. Their Help for Heroes Recovery Centre, North in Catterick helps thousands of Yorkshire-based troops and their families, and it’s fantastic for us to be able to give something back to those brave people who put their lives on the line for us.”

Mel Waters OBE, CEO of Help for Heroes, said: “We are honoured to be selected as the Tour de Yorkshire’s Official Charity Partner for 2019. Sport plays a huge role in the recovery of our Veterans who have become wounded, injured or sick. We are excited to be partnering with such an iconic event because we know first-hand the benefit this can bring to so many lives.”

Full details on Help for Heroes can be found at https://www.helpforheroes.org.uk

And last but by no means least, it was revealed that the Tour de Yorkshire Ride sportive will be back for a fifth successive year in 2019.

Leeds was unveiled as the start and finish location for the event which will be held on Sunday 5 May. 6,000 amateur cyclists will have the chance to ride some of the county’s most iconic roads just hours before the Tour de Yorkshire reaches its conclusion.

“The special thing about our sportive is that cyclists get to sample the same roads as the pros and end their ride on the exact same finish line, meaning they’ll receive a rapturous reception and then get to watch the action in person.”

Nick Rusling, CEO of the sportive organisers Human Race, said: "It’s been five amazing years now where we have been able to offer amateurs the unique chance to ride on the same roads and cross the same finish line as the pros on the last day of the Tour.

“On the Tour de Yorkshire Ride in 2019 we will have seen over 20,000 riders being part of this special occasion over the five years. This year will offer fantastic and challenging riding through the stunning Yorkshire Dales. The Leeds city centre finish is something to cherish forever with huge crowds out cheering you on like you are a real pro. It is truly a unique experience.”

Entries for the 2019 Tour de Yorkshire Ride are now open at a special early bird rate and full details can be found at http://letour.yorkshire.com/sportive

To apply to be considered as a Tour Maker visit http://letour.yorkshire.com/tour-makers 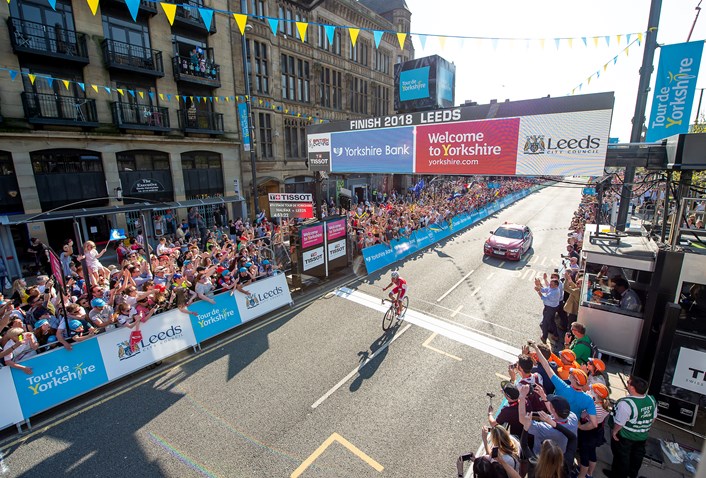