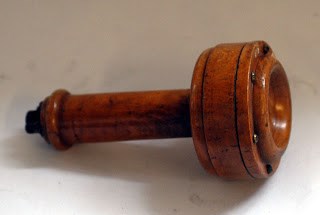 In an age of smartphones and tablets, it’s hard to believe this humble-looking object was once the pinnacle of telephonic technology.

But the wooden receiver, one of a pair now on display at Leeds City Museum, was in fact part of the UK’s first ever telephone conversation.

The receivers were made and donated by James E. Bedford, a former Lord Mayor of Leeds, in the early 1920s- but their significance was not fully known until much more recently.

The Leeds Museums and Galleries team were contacted in 2010 by a relative of James' brother Charles S. Bedford asking to see what was reputed to be "the first telephone made in England".

Later, a letter arrived from a volunteer at Amberley Museum in West Sussex, which included a copy of an article in "The Telegraph and Telephone Journal" from April 1933.

The article revealed that James and his brother, both science enthusiasts, were “vastly intrigued by a description of Graham Bell's new invention, the telephone” and they immediately decided to make the two replicas.

Their first conversation over the line was between an attic and a workshop 30 yards away.

"That's all right. Will you go through the alphabet."

"Wait a minute while I adjust the screw."