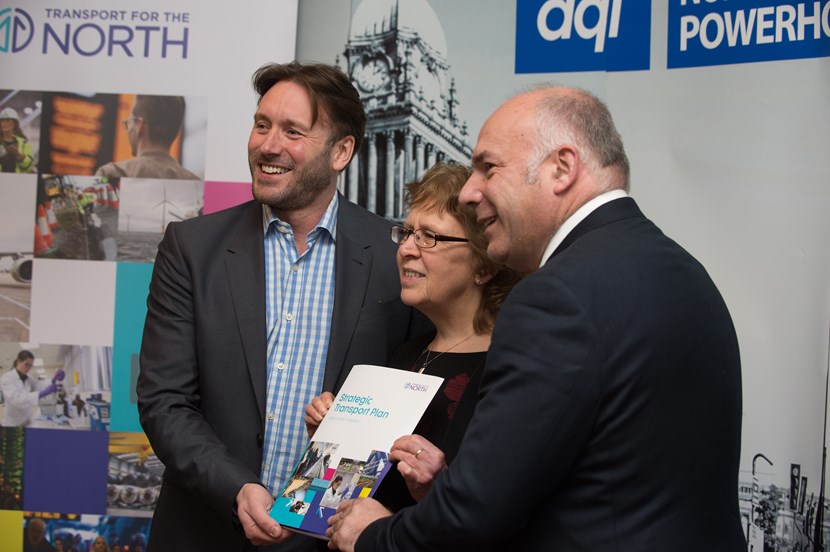 PRESS RELEASE ISSUED ON BEHALF OF TRANSPORT FOR THE NORTH

Plans for future transport investment in Leeds City Region and the wider North of England have been outlined today at an event marking the publication of a thirty year plan to drive economic growth.

Cllr Judith Blake, Leader of Leeds City Council, who represents Leeds City Region on the Transport for the North Partnership Board, and aql Chief Executive Professor Adam Beaumont, who is also a representative of Leeds City Region Local Enterprise Partnership launched the plan at the aql Data Centre. Digital is one of four regional strengths which have been identified as vital to transforming the Northern economy. The aql Data Centre is a major investment in the digital infrastructure that will power the future growth of the city of Leeds.

Transport for the North’s Strategic Transport Plan is the first of its kind and outlines how connections across the North of England need to be improved to drive growth and close the economic gap between the North and the rest of England. The public are now being asked to share their thoughts on the proposals through a thirteen-week consultation.

Aimed at rebalancing the UK’s economy through a sustained 30-year programme of transport infrastructure investment, the plan could deliver a £100 billion boost to the economy and 850,000 additional jobs by 2050.

Leader of Leeds City Council and Transport for the North Partnership Board member Councillor Judith Blake said, “This new 30-year plan represents an ambitious but deliverable vision for a transformational improvement to our transport network and connectivity both across the north and also with the rest of the country. It is a vitally-needed level of investment to not only help realise the economic potential of the north but would also boost and be part of the process of rebalancing the national economy too. Most importantly it would benefit the lives, prospects and opportunities for millions of people living in the Leeds City Region and the wider north as a whole, so we encourage as many people as possible to take part in the consultation and tell us what they think.”

Transport for the North is working to make it easier for people and goods to travel across the region, increasing access to jobs, supporting businesses and improving the movement of freight and goods across the North and to its ports and airports. Seven ‘corridors’ of opportunity are identified in the plan that are key to achieving these aims.

The ‘Central Pennines’ corridor will improve east-west connectivity for some of the North’s important economic centres and assets in North Yorkshire, West Yorkshire, East Riding and Hull and Humber through to Greater Manchester, Lancashire and Liverpool City Region. Whilst a full list of the improvements which will be needed has not yet been published, emerging priorities for this corridor include the transformation of Leeds station to allow for new HS2 and Northern Powerhouse Rail services, the provision of a rail-route across the central Pennines which would be prioritised for freight and major improvements to the M65/A59 road corridor. These are in addition to the baseline investment assumptions set out within the plan.

John Cridland, Transport for the North Chairman, said, “The North is a rich, diverse region and home to around 16 million people. We have vibrant communities, buzzing cities, five stunning national parks, an abundance of talent and a wealth of high-performing businesses. Transport for the North’s vision is of a thriving North of England, where modern transport connections drive economic growth and support an excellent quality of life.

“For the first time, civic and business leaders and transport operators are speaking with one voice on transport to make sure the North fulfils its potential. Our plan proposes a revolutionary investment programme that will make it possible to travel to high quality jobs. This is an ambitious programme that will improve our roads and railways, and will also drive a sea change in skills development in the North and ensuring we meet that historic gap in investment.”

Alongside the corridors, Transport for the North has for the first time outlined its emerging vision for Northern Powerhouse Rail, a rapid, reliable and resilient rail network between the North’s six biggest cities and other economic centres.

Northern Powerhouse Rail, which would see a new railway line linking Leeds with Manchester via Bradford as well as much faster connections between Leeds and Sheffield, Newcastle and Hull, would mean that an additional 46% of the population, over 1.4 million residents, would be able to access 3 major cities within 90 minutes from home. An additional 344,305 businesses will be able to connect with Leeds within 90 minutes and it is estimated that the impact of agglomeration between Leeds and Manchester alone would deliver an additional £60 million a year into the economy.

The plan is accompanied by an updated Rail Strategy for investment in the North’s existing lines, stations, services and franchise operations, reflecting the planned integration of Rail North into Transport for the North in April this year.

In the short-term, Transport for the North has commenced a rolling programme from now until 2021 to introduce integrated and smart ticketing across the North of England. This will make paying for and planning travel much easier, starting in major cities and across the busiest routes.

The investment priorities are backed up by research that links the North’s prime capabilities in advanced manufacturing, digital, energy and health innovation. The cost of the 30-year plan is estimated to equate to less than £150 per northern citizen per year, or £2-2.3 billion per year.

This figure also includes spending which would already be expected as part of ongoing strategic transport investment in the North, with only £50 per person per year (£700-900 million per year) additional spending. Regional spend figures issued by the Infrastructure and Projects Authority for the four years from 2017 calculated that projected Government spend on strategic transport will be £1,039 per head for the three Northern regions (North West, North East, Yorkshire and Humber).

The public consultation on the Strategic Transport Plan will run until 17 April 2018 with engagement events taking place across the North, including in Blackburn on 1st March, Leeds on 5th March, Wakefield on 21st March and Bradford on 10th April. A final version of the plan will be published later in the year and submitted to the Government for ministerial consideration.

Find out more by visiting www.transportforthenorth.com.

Transport for the North’s draft Strategic Transport Plan and associated documents will be available for download from www.transportforthenorth.com from 12.00 midday on Tuesday 16th January. Details of how to participate in the public consultation, as well as dates for public engagement events, will also be on the site.

Transport for the North has launched the Strategic Transport Plan at a series of events that highlight the region’s prime capabilities. These are:

By delivering increased capacity, services and frequency, Northern Powerhouse Rail is a proposed network which would transform rail travel between the North’s six main cities and Manchester Airport. Once delivered, over 1.3 million people would be within 60 minutes of four or more major Northern cities, compared to fewer than 10,000 people today.

Transport for the North’s emerging vision for Northern Powerhouse Rail is outlined in the Strategic Transport Plan. It includes:

Further development work is ongoing to understand the options and case for a new line or significant upgrades between Manchester and Sheffield and to refine options and build a business case for the whole network.

New initiatives introduced by Transport for the North, and identified in the Strategic Transport Plan, will make travelling on public transport easier and quicker for passengers across the North. The Integrated and Smart Travel programme will give passengers better choices about travel and guarantee access to the fairest journey prices. The first phase of the programme will begin this year, with the roll-out of smart ticketing for rail season ticket holders.

Driving improvements on the region’s roads

Transport for the North has set out a Major Road Network for the North, linking both current economic centres and locations which will be vital to future economic growth.

The Strategic Road Network of motorways and trunk roads makes up 2% of the roads in the North yet accounts for a significantly higher proportion of traffic flow and economic value. But for many of the North’s businesses it is the rest of the road network, or the last mile, that can make all the difference as to whether goods or people arrive in time, or as efficiently as possible. The Major Road Network for the North, as agreed by leaders from across the region, comprises around 7% of the region’s roads and is the focus of Transport for the North’s long-term investment proposals.

Transport for the North is also working with Highways England and the Department for Transport on three strategic road studies: dualling the A66, major improvements to the Manchester North West Quadrant area and a Trans-Pennine Tunnel and associated road improvements to transform journeys across the southern Pennines.

Long-term Rail Strategy for the North

An updated Long-term Rail Strategy for the North is being published alongside the Strategic Transport Plan, outlining priorities for investment in lines, stations, services and franchise operations across the whole of the North’s railways to deliver greater connectivity, capacity and cost effectiveness. This reflects the planned integration of Rail North into Transport for the North when it becomes a statutory body in April next year.

Following last week’s approval by Parliament, Transport for the North will become England’s first Sub-national Transport Body at the beginning of April. Statutory status will ensure that the organisation’s plans are formally considered by Government when taking decisions about transport investment in the North. 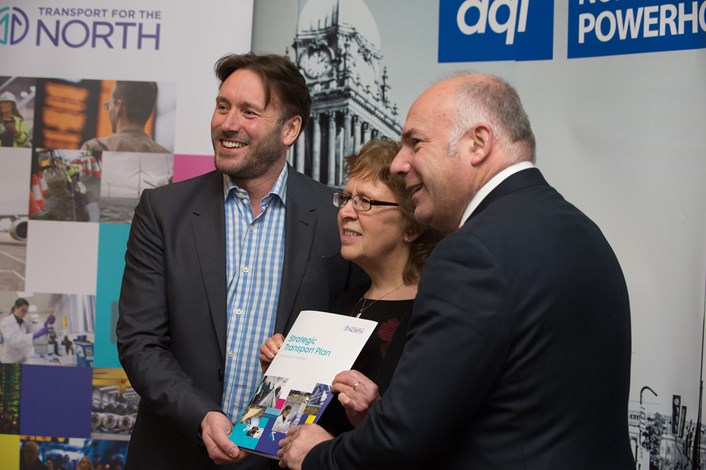