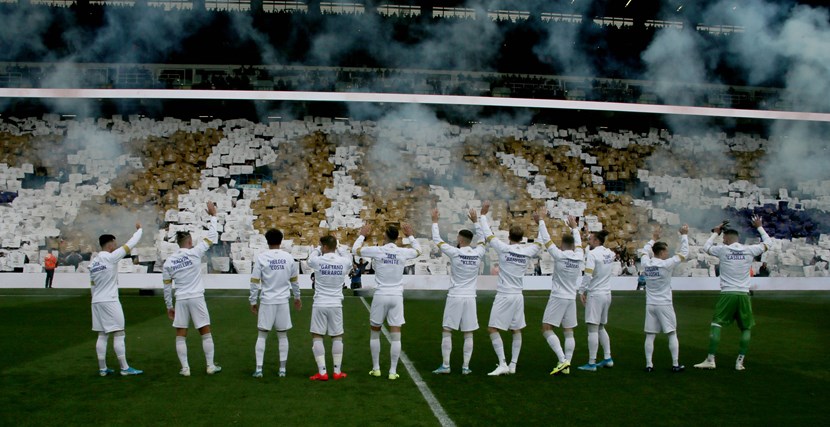 Leeds Centurions to get festive season underway in Leeds

This year’s Leeds Christmas Lights switch-on will have been 100 years in the making when Leeds United take to the stage as the special guests of honour to officially kick off the festive season.

On Thursday, November 7 outside Leeds Art Gallery, players from the Elland Road side’s first team will be joined by members of the ladies team and club legends as the club marks its centenary.

Former X Factor winners Rak-Su, classical quartet G4 and a host of other celebrities and local performers will entertain the 20,000 crowd expected to attend this year’s seasonal showpiece.

As part of the club’s centenary celebrations, Leeds United are marking their very special birthday with a series of exciting events and activities in and around the city this season. Following an unforgettable occasion that saw thousands of fans join the players at an event in Millennium Square last month, supporters will have another chance at the Leeds Christmas Lights switch-on to see their heroes and kick-off the festive season in style.

Kalvin Phillips of Leeds United said: “As a local lad it’s an honour to be involved in the Leeds Lights celebration along with my team mates. The lights switch on is always a special night for the people of Leeds and it leaves the City looking amazing for Christmas- there is no better place to be than round here during the festive period.”

Rak-Su, the British R&B group from Watford, consisting of childhood friends Ashley Fongho, Jamaal Shurland, Myles Stephenson and Mustafa Rahimtulla, said: “We are so excited to perform in Leeds in front of 20,000 fans and to be starting the official countdown to Christmas with a bang!” The group emerged victorious from the fourteenth series of The X Factor in 2017, becoming the first male group to do so performing their own original song.

Popular Opera pioneers G4, made up of Jonathan Ansell, Lewis Raines, Mike Christie and Duncan Sandilands, will be performing a selection of their timeless festive classics in the lead up to their forthcoming expected sell –out G4 at Christmas concert in Leeds Town Hall later in November.

G4 lead singer Jonathan Ansell said: “It’s a huge thrill to be a part of this annual festive celebration in the heart of my new home town of Leeds. It’s magical how the city transforms into a Christmassy wonderland with so many happy faces right into the distance all eager to see the switch on. I am thrilled to be performing with G4 before our Christmas show at the Leeds Town Hall.”

Cbeebies favourites Alex Winters and Evie Pickerill will entertain the younger generation in the crowd by performing a fun based Christmas - oke style interactive performance with two Elf performers helping to get the audience singing along.

Original cast member of the West End’s Miss Saigon, Katherine Picar will also be helping to get things into the Christmas spirit with a performance of the enduring holiday classic ‘All I Want For Christmas Is You’. Katherine will be starring as Princess Ariana in the Carriageworks Theatre annual pantomime, Sleeping Beauty from Friday 22 November.

Also appearing at the event will be some of the city’s brightest local and emerging talent; 17 year singer-songwriter Sophie Littlejohns who is this year’s Breeze Has Talent competition winner and Hannah Slavin who made a name for herself following her win with Leeds Contemporary Singers on BBC One’s ‘Pitch Battle’.

Hannah is set to be one of the most exciting up and coming female pop acts of 2019 and will be performing her debut single ‘I Am A Mess’. Hannah has been selected to perform at the event via a new collaboration with Music:Leeds through their ‘Launchpad’ program - an open call that provides local artists with mentoring, recording support and live opportunities.

Lord Mayor of Leeds Cllr Eileen Taylor will be on hand along with the new Children’s Mayor – 9 year old Wania Ahmad from Harehills Primary school, whose winning manifesto aims to raise awareness of and tackle mental health and wellbeing for children in the classroom.

“It’s brilliant to have such incredible events in our amazing city and for free! Last year’s light switch on was a highlight for us and me and Katy can’t wait to host the stage for what is sure to be a brilliant variety of entertainment.”

“We are very proud to have the players from Leeds United celebrating their centenary with us this year at our Christmas lights switch-on. This year we have another fantastic line up of performances for the crowds to enjoy.

“There’s always an amazing atmosphere at the Christmas lights switch-on and it’s one of the highlights of the year for thousands of families from all across the city. “

Other attractions on the night will include fun fair rides along Cookridge Street, street food concessions with entertainment culminating in the big switch-on of one of the UK's largest displays of city centre festive illuminations and spectacular fireworks.

A raised accessible viewing platform will be available for disabled persons with access from Victoria Gardens via the ramp approach to the Art Gallery. Due to space limitations access to the platform will be on a first come first served basis and will be restricted to one companion only. For further details please contact the events team at events@leeds.gov.uk or 0113 378 6988.

The Leeds Light switch-on marks the official start of the city’s ‘Make it Leeds’ this Christmas campaign which will feature a number of special events and activities including the annual Christkindelmarkt on Millennium Square which starts on Friday November 8 from 10.30am.