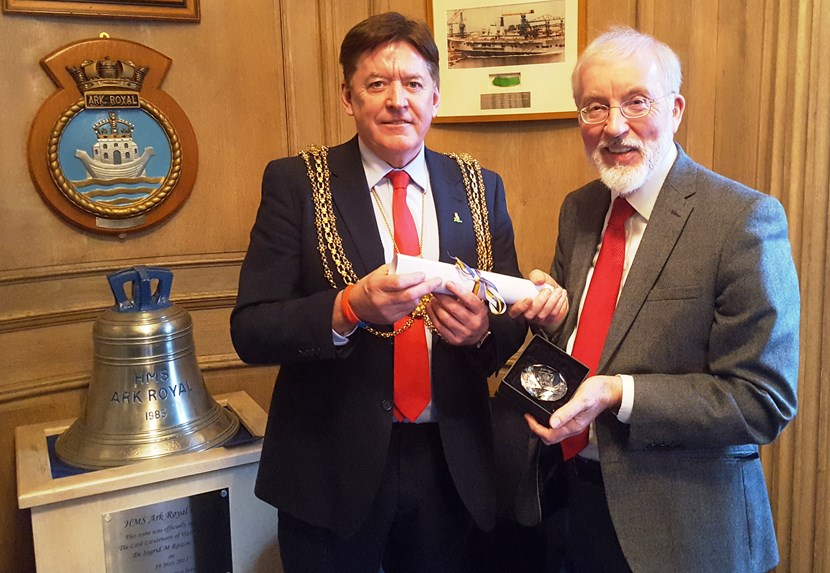 A tireless guardian of Leeds’ historical past and influential campaigner for a positive architectural future has received a prestigious civic award.

In recognition of the pivotal role he played as Director of Leeds Civic Trust in both protecting and shaping developments in the city for nearly 30 years, Dr Kevin Grady has now been recognised with a Leeds Award. The Leeds award recognises those people who have made an enormous contribution to the city, with their names proudly displayed on the wall in the antechamber of Leeds Civic Hall.

During Dr Grady’s time as director, the role, profile and influence of the trust has grown significantly. Alongside the introduction of guide books, heritage walks and public lectures, a Trust planning committee also meets on a fortnightly basis to review progress on key developments in the city. As part of its work to keep a close eye on recently submitted planning applications, the Trust will also comment and offer their thoughts on many new developments. Such is the stature of the trust they are often consulted by those seeking to carry out new build or refurbishment developments in and around the city and continue to be a respected voice, partner and sometimes critical friend to the council, developers and other groups and organisations in Leeds.

The Civic Trust also introduced during Dr Grady’s tenure as director, the now iconic blue plaques dotted across the city which now totalling 150, recognises and promotes the heritage of Leeds.

“I was delighted to present Dr Grady with the Leeds Award in recognition of his enormous contribution to the city for nearly 30 years as Director of the Leeds Civic Trust. Kevin has worked tirelessly to ensure that Leeds’ rich heritage is both protected and incorporated into future developments, and there can be no bigger compliment than to say that that one of his big legacies is that the voice of the Civic Trust is always respected and listened to, even if people may not always agree with their view.

“I wish Kevin all the very best for his retirement and again thank him for his invaluable contribution to the city.”

“It is a tremendous honour to have the Leeds Award conferred on me by my adopted city. Leeds is a fantastic place to live in and the city has been very good to me.

“I came to Leeds in 1969 and had a wonderful six years studying economic history at Leeds University. I continue to get great enjoyment in sharing my knowledge of the history and heritage of Leeds through my books, public lectures and the Leeds Civic Trust blue plaques scheme. As Director of Leeds Civic Trust for almost thirty years, it was privilege to be in a position where I could influence the future shape of development in the city, promote the improvement of its amenities, and celebrate the city’s heritage and all those things which are good about Leeds.

“I feel the Leeds Award also recognises the important role Leeds Civic Trust has played in the city; as its public face I represented the collective efforts and hard work of many people who were and continue to be devoted to making Leeds the best place it can be.”