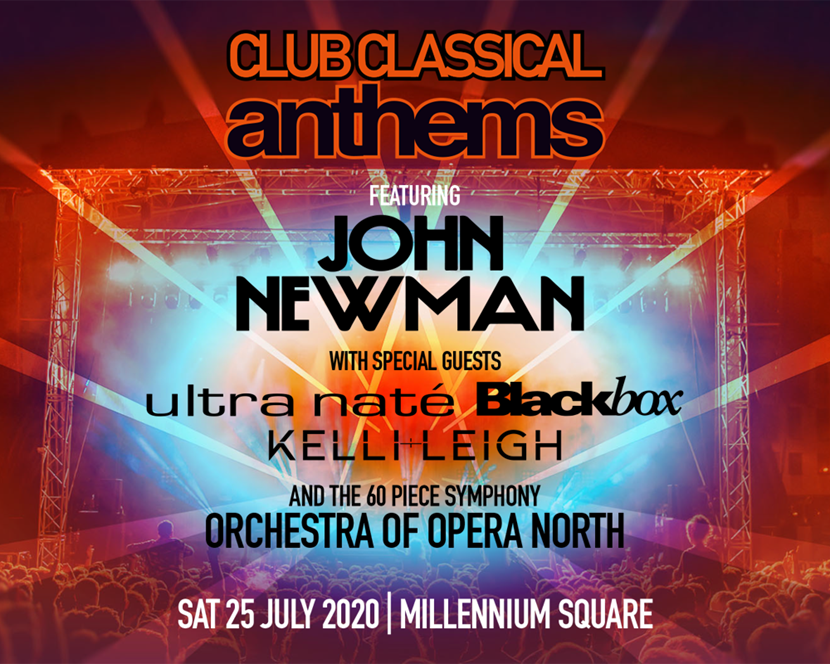 John Newman has today been announced as the headline artist in a brand new outdoor summer dance party in Leeds Millennium Square on Saturday 25 July that is set to redefine the popular club vs classical phenomenon with a modern-day twist.

With live performance from two-time UK number one vocalist Kelli-Leigh and 90s dance legends Ultra Naté and Black Box, Club Classical Anthems will feature some of the greatest dancefloor and club anthems of all time, re-imagined and performed live by the 60-piece Orchestra of Opera North.

Born in Settle, North Yorkshire to a mother obsessed with Motown and Northern Soul which would heavily influence his music, singer and songwriter John Newman is no stranger to Leeds, having lived in the city for three years whilst studying at Leeds College of Music. Working as cocktail barman and gigging as much as he could at various venues across the city, for the first time he felt accepted. “Leeds was all about your personality, about who you were” he says. “By the end of my time there I knew what I was doing was cool”.

In 2012, a year before his first solo material had even seen the light of day, John Newman scored a number one single, appeared on both Later with Jools, and the Christmas Top Of The Pops, and had written and sung on two of the biggest dance hits to storm the UK charts in years. This included Rudimental's massive number one ’Feel The Love’ which will be afforded an electrifying symphonic makeover at the event along with a selection of his other anthemic songs including; ‘Give Me Your Love’, ‘Blame’ and the number one banger ‘Love Me Again’.

“I’m so excited to be returning to Leeds which will forever hold a special place in my heart. It will also be an honour to be able to perform with the amazing Orchestra of Opera North” says John. “Millennium Square is such a great outdoor venue in the heart of the city and Leeds really knows how to party so this is going to be a very special occasion”.

Joining John on the bill is singer and songwriter Kelli-Leigh who is one of the rising stars of the new wave of UK pop-dance artists. Born and raised in South London, Kelli-Leigh Henry-Davila is best known for being the uncredited vocalist on the UK number one single and grammy nominated "I Got U" by Duke Dumont featuring Jax Jones and as well as the credited vocalist on the UK top 10 single "More Than Friends" with James Hype, both of which she will be performing live with the 60-piece symphony orchestra. Kelli-Leigh has been self-releasing through her own record label 'Music Core' since 2018, with a series of standout anthemic-pop singles. She will be performing a number of these singles as well as her other huge feature hits as the main support to get the crowd ready for an amazing evening of live music.

World renowned US singer, songwriter, DJ and 90s legend Ultra Naté is another special guest feature artist on the Club Classical bill. During Ultra’s three decades of making music, she has remained a musical chameleon, embracing a variety of genres including house, soul, disco, electro pop, R&B/hiphop and rock. Her perennial platinum-selling number one anthem ‘Free’ will be afforded a spectacular symphonic reboot especially for this show.

“I am really looking forward to returning to the UK for this very special and unique performance in Leeds. I am so incredibly proud that ‘Free’ is regarded as one of the best dance anthems of all time. I am so thrilled to be able to perform this live with a 60-piece symphony orchestra, together with another of my most precious anthems ‘If You Could Read My Mind’, best associated with the trailblazing New York 70’s dance club - Studio 54”.

The leading exponents of a wave of Italian house music that flourished on the dance floors of the late 80s and early 90s, Black Box’s ’Ride On Time’ became the first of a series of Italian house records to crossover to the UK charts, staying at number 1 for six weeks in 1989 and earning the status of the bestselling record of that year. ’Ride on Time and further hits ’Everybody Everybody’ and ’Strike It Up’ will all be featured in the show, reworked and performed live alongside the Orchestra of Opera North.

Club Classical Anthems is another exciting collaboration between Leeds City Council, Opera North and the producers of the 80s Classical and The Symphonic Sounds of Back to Basics events. The musical masterminds behind the new musical arrangements are composer and arranger Cliff Masterson and Musical Director Steve Anderson, whose credits include Kylie Minogue, Emeli Sandé and Leona Lewis. “We’re absolutely thrilled to be working with Leeds City Council and Opera North to create yet another fresh and thrilling show in Millennium Square” says Cliff. “The existing structure of dance music provides such great platform where we can recreate and amplify the existing scores for the orchestra, adding a truly epic dimension to how they are performed live”.

Steve Anderson adds: “It is incredibly exciting to be able to bring a contemporary twist to the club vs classical genre and a real honour to work with such prestigious artists and be entrusted to re-imagine some of their most iconic songs and biggest club anthems of all time. Along with the amazing backing vocalists this latest collaboration with the mighty Orchestra of Opera North is set to be another sensational night full of joy and drama with a nonstop array of dance club bangers that everyone will be singing along to.”

“Building on the success of our previous Millennium Square events, Club Classical is another creative and brilliant event for the city. We are absolutely thrilled to be working with a line-up of such iconic voices and stylish performers headed by John Newman. Our ongoing relationship with the Cliff, Steve and Leeds City Council gives Opera North the chance to showcase the incredible versatility of the Orchestra in the amazing venue that is Millennium Square, right in the heart of our home city.”

Tickets for the event go on sale at 10am on Friday 28 February and are priced at £29.50 general admission or £27.50 for groups of 5 or more. Tickets will be available to purchase online at www.millsqleeds.com, by telephone (0113 376 0318) or in person from the City Centre Box Office in Leeds Town Hall. Tickets will also be available from Opera North.

Doors for the event on Saturday 25 July 2020 will open from 6.30pm with DJs from 6.45pm and the main performances from 8.15pm. A number of street food catering concessions together with a fully licenced multi-pour festival style bar will be available within the specially created outdoor arena. The venue is also fully accessible with a raised viewing platform, disabled toilets and a Changing Places high dependency unit. Full accessibility information and companion ticket details are available from the venue website or by calling the City Centre Box office.

Club Classical Anthems is part of a trio of special outdoor summer classical concerts organised in partnership between Leeds City Council and Opera North, and forming one of the key cultural highlights of the annual Millennium Summer Series programme. 80s Classical has already been announced for Friday 24 July and a further announcement on the third event will be made within the coming days.

Performed by the original vocalists, the greatest dancefloor and club anthems of all time get a symphonic reboot in the club vs classical event of the summer. Global superstar John Newman, heads a bill featuring dance legends Ultra Naté, Black Box and Kelli-Leigh. Get ready to party to some of the biggest anthems of the past 30 years, re-imagined and performed live by the 60-piece Orchestra of Opera North in Leeds’ premier outdoor concert arena. 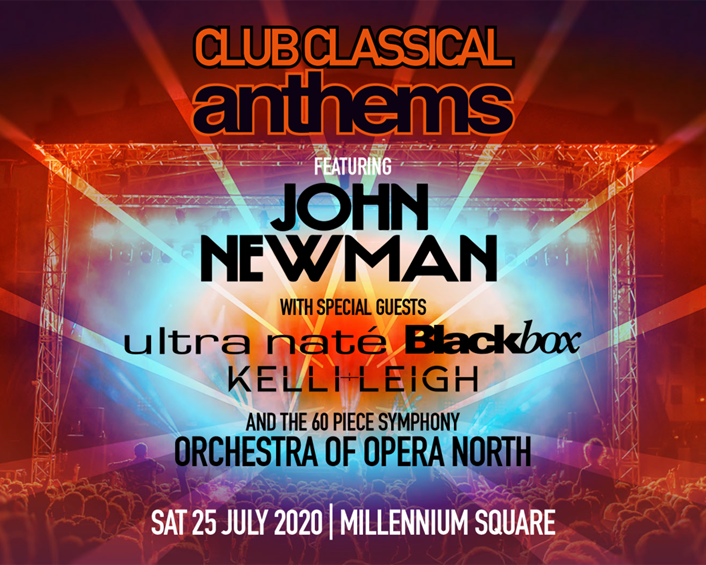