Residents and businesses near or impacted by the route of the Columbia Threadneedle World Triathlon Leeds are being encouraged to regularly visit a new interactive map for the latest information about the event.

The map which can be seen via www.leeds.gov.uk/leisure/Pages/Triathlon-route.aspx was launched at the end of last month showing the route the Leeds leg of the prestigious ITU World Triathlon Series will follow when it takes place on Sunday 12 June.

Created by Leeds City Council, the map allows those impacted by the route to see the latest information for residents and businesses. Properties directly impacted were sent letters when the route was revealed, and the map also now offers information for a secondary level of properties further away from the route that will be impacted in a lesser way. All of the properties on or near the route will be receiving further details in a letter in April.

The map has already been visited by more than 700 people since it was launched on January 29 and the council, which is organising the event alongside Lagardère Sports, British Triathlon and the International Triathlon Union (ITU) with support from UK Sport, is encouraging all those impacted by the route to regularly check it for updates as they become available.

“From the success of hosting the Tour de France Grand Départ we know the importance of informing those impacted by the event as early as possible with key details such as event timings, road closures, parking arrangements and traffic and travel information.

“It is the same with the Columbia Threadneedle World Triathlon Leeds – we want everyone to know well in advance how the day will work so everyone can enjoy what will be a fantastic event for Leeds. So I would encourage people to regularly visit the interactive map and the supporting pages on our website for the latest information.”

The interactive map shows the route to be followed by the world’s finest triathletes in the elite men’s and women’s races to be held on the Sunday afternoon. These races are expected to feature homegrown stars Alistair and Jonathan Brownlee as well as Leeds-based duo Non Stanford and Vicky Holland, taking on their rivals from across the globe in the British athletes’ final event on home soil before the Rio 2016 Olympic Games.

They will be preceded in the morning by the mass-participation events offering approximately 5,000 amateur triathletes the chance to take on the same course as the professionals, with the only slight differences being variations to the bike and run elements to cater for the different distances being completed and the second transition point being on the former site of the Leeds International Pool. All competitors will enjoy the chance to cross the same finish line on Millennium Square.

Final places in the sprint and beginners events are available and can be booked through the official event website at http://leeds.triathlon.org.

Details will also be announced in the coming weeks of the activities and events taking place in Roundhay Park on Saturday 11 June, offering people of all ages a sample of triathlon the day before the main event.

Anyone keen to volunteer at the event can express their interest via http://leeds.triathlon.org//event_info/volunteer

Event information for Leeds can be seen at www.leeds.gov.uk/leisure/Pages/World-Triathlon-Leeds-2016.aspx, while anyone interested in receiving the latest email updates can sign up to do so by contacting worldtriathlonleeds@leeds.gov.uk.

Following transition two on Millennium Square, the run course is as follows:

Columbia Threadneedle Investments started its successful relationship with the ITU World Series in 2013 and has since become Global Financial Services Partner.

1 Source: Ameriprise Financial Q4 2015 earnings release. Past performance is not a guide to future performance. The value of investments and any income is not guaranteed and can go down as well as up and may be affected by exchange rate fluctuations. This means that an investor may not get back the amount invested. This material is for information only and does not constitute an offer or solicitation of an order to buy or sell any securities or other financial instruments, or to provide investment advice or services. 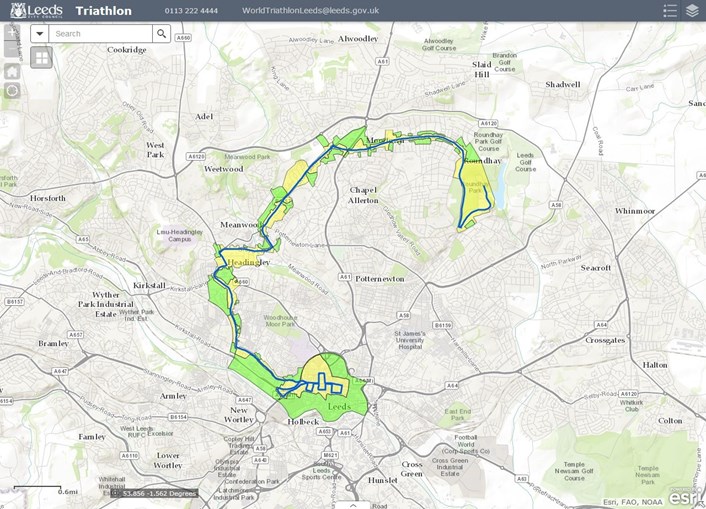