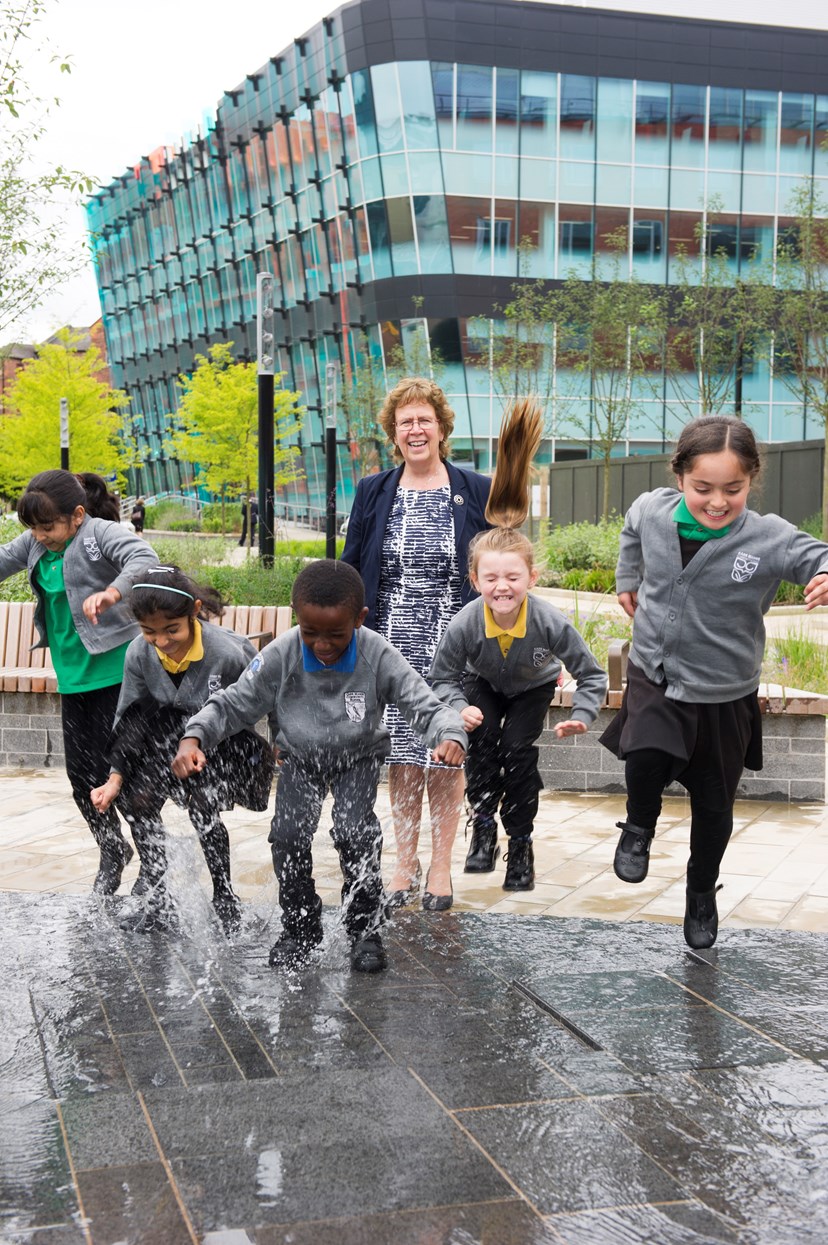 An idea sown eight years ago to create a new green space for everyone to use in busy central Leeds has bloomed into a stunning city centre oasis.

Families, office workers and anyone passing through the city centre can now enjoy the elaborate water features, lush grass and relaxing seating areas of the Sovereign Square green space, which opened today (Friday).

And the children really got into the spirit of the occasion by splashing about in part of its new water feature section, after they helped Cllr Blake switch on the button to operate it.

She had first said a few words to celebrate the opening, along with Prof Alan Simson, Professor of Landscape Architecture from Leeds Beckett University, who said places like Sovereign Square are fundamental to cities, and Bruce Lightbody, partner at Addleshaw Goddard, the business law firm due to move into the square in November.

Located on half a hectare of what was the former council pay and display car park on the former Queens Hall site, Sovereign Square is in an ideal spot for taking a break from the busy, built-up area close to Leeds City Station.

Designed by local landscape architects re-form, it features raised lawns with seating at different levels for social gathering, eating lunch, relaxation and play; a tree grove with timber-topped granite benches (soon to feature WiFi) to work, read or chat; water features and a rain garden. These are part of the site’s water management system that cleans rainwater and run-off from the viaduct, can absorb extra water in storms and provides eco-friendly plant support.

It also supplies what is the most striking aspect of the site- the fun-packed water feature system of mists, pools and water jets for children to play in. The water feature was designed by Fountain Workshop, who used the area’s natural geology of river courses and canals as their inspiration.

“Sovereign Square is a wonderful breath of fresh air in a very densely-used, busy section of the city centre. You can actually feel yourself relax as you step into it and I’m delighted the Carr Manor children are helping us welcome families, workers, residents and everybody passing through to share this very special space.

“I am particularly pleased that we had the vision and dedication to both identify the need for Sovereign Square and see through making it a reality. The idea was initiated in a recession but the council has pursued it as a driver of development in the area, using our own assets to achieve it in the best-value way.”

“It’s fantastic to see our design for the first new city centre public space in Leeds for a generation brought to life. Our concept for Sovereign Square took inspiration from the history of the area and water is a major element of the scheme with a new fountain plaza linking to the River Aire through a 100m long water rill.

“This, alongside the undulating lawns, trees and ample new seating, makes Sovereign Square a major destination space for workers and visitors to the city as well as an attractive walkthrough connecting the city centre to the South Bank. Sovereign Square will set the standard for public realm design in the city for years to come.”

"It is fantastic to see the realisation of a strategic vision with the opening of this very high quality green space and public realm. This is a major asset for this part of the city which has already resulted in two major occupiers committing to the location for the long term."

Controlled by an elaborate system of computer sequences, moods and effects, the water in the plinth area emerges both horizontally and vertically and is aimed at inspiring memories of springs, streams and river sources. The rill feature conveys the water through the square and will be lit up at night by a ribbon of LED lights.

The concept for the beautiful breakout zone came from a conference hosted by the council in 2008 that brought together key local government, business and community voices to inspire a 20-year vision for the city centre. It identified a perceived lack of quality green spaces.

After looking into the issue, council officers realised there was a particular scarcity of green space south of the railway line and River Aire. They set about examining how they could maximise benefits and reduce costs by potentially using existing council land and working with partners to bring together a wider development.

The former Queens Hall car park was pinpointed and partnerships were set up with Muse and Bruntwood for mixed use development with high quality green space and the construction of the new KPMG office headquarters, followed by the building of 3 Sovereign Square.

The Leeds City Council-owned Sovereign Street site housed a temporary pay and display car park since plans were scrapped for the Criterion Place development. The construction of the neighbouring Leeds headquarters of KPMG, delivered through Muse, was the first major office development in the city centre for over five years. Bruntwood and Kier Property are developing 3 Sovereign Square which business law firm Addleshaw Goddard have pre-let part of.

Sovereign Square is part of the council’s vision to extend the city centre southwards and address its shortage of quality green space and is intended to be the forerunner of the City Centre Park south of the River Aire. The new £2.5 million green space will be a catalyst for further development of the area.re-form Landscape Architecture was created in 2011 by landscape architects Andrew Price and Guy Denton. In four years, the company has grown to a team of 13 and worked on a number of high profile schemes across the country including major public realm schemes in Leeds, Peterborough, Lichfield and Hull. The company specialises in creating enduring, sustainable designs which create a sense of identity, support the local economy and inspire communities. Current projects include a new riverside called ‘Fletton Quays’ in Peterborough and a new riverside park in Darlington. In November 2015, re-form expanded into the North-West, opening a second office at The Hive in the Northern Quarter of Manchester following a series of project wins in the region. 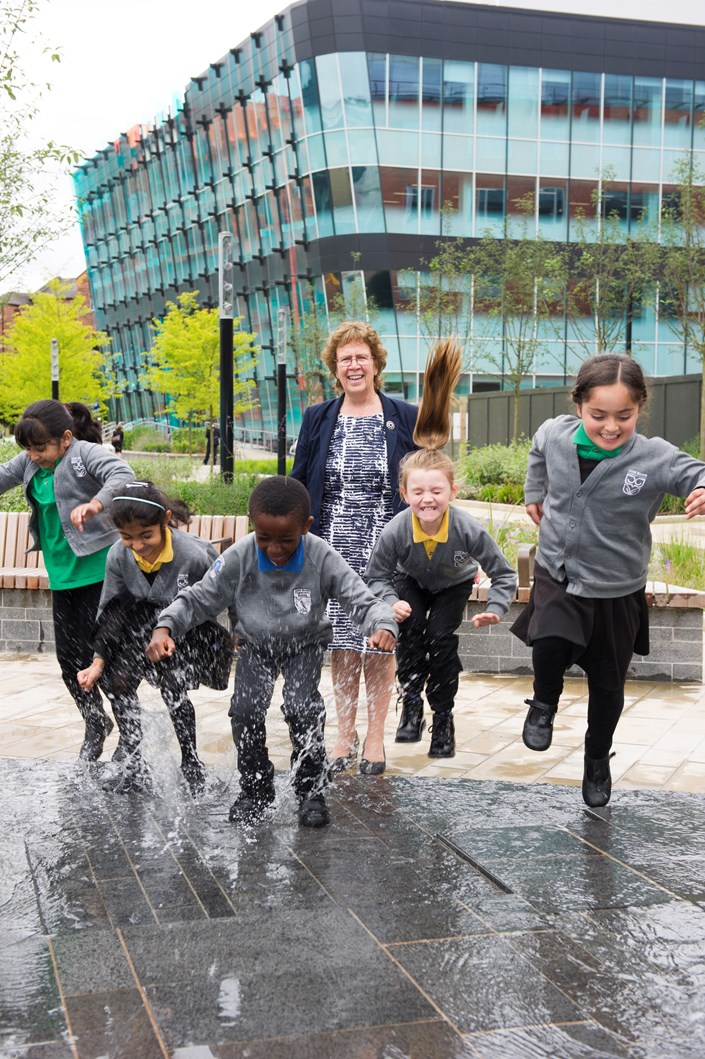