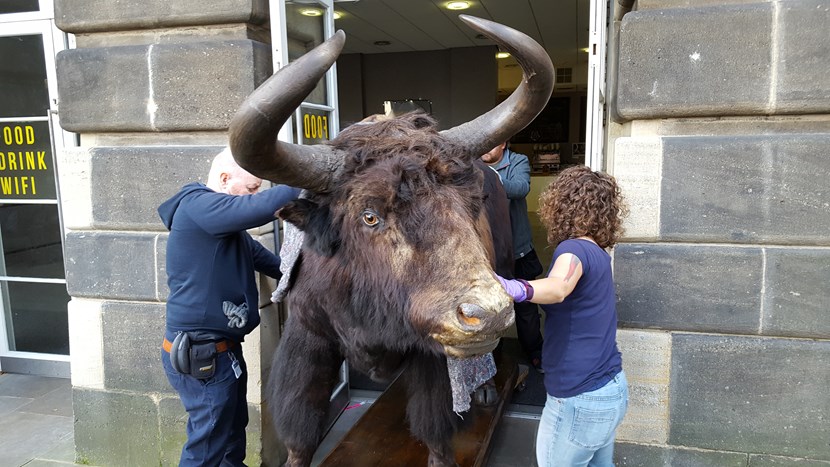 Hit the road, yak as museum’s 160-year-old giant gets out and about

The impressive stuffed mammal, which measures almost three metres long, was carefully manoeuvred out of the museum on Millennium Square and into a waiting truck before being whisked away for important conservation work.

Routine monitoring by the museum team had discovered moth larvae in the yak’s case- an insect which feeds on natural fibres including fur and feathers.

The 160-year-old yak, along with a number of other specimens including a giant panda and a polar bear, have now been taken to the Leeds Discovery Centre to be placed in deep freeze before the moths and eggs are removed by specialist conservators.

Rebecca Machin, Leeds Museums and Galleries’ curator of natural sciences said: “The yak is one of the largest and most impressive objects we have on display and it’s been a very tricky task getting it out of the museum and into our conservation studio.

“A three metre yak isn’t something you see every day on the streets of Leeds and it certainly turned quite a few heads. The taxidermy collection is always really popular and it’s great people are so keen to know more about it.

“The yak is such an amazing and historic specimen - we take every care to protect all our exhibits from any damage by moths and other pests. On the rare occasions when something does get through our defences, we have specialist facilities on hand at the Leeds Discovery Centre to ensure the animals can be conserved and put back on display as soon as possible.”

The yak first arrived in Leeds from Tibet in 1862 and was hailed by the museum at the time as being part of "the rarest and most important acquisitions that could be added to our collection."

At that time Tibet was remote and inaccessible, a fact which didn’t deter English explorer Colonel Edmund Smyth (1823 -1911), who sent the yak’s skin back to the UK for display.

The yak and other animals in the case are expected to be at the Leeds Discovery Centre for around a fortnight before being returned home.

Councillor Brian Selby, Leeds City Council’s lead member for museums and galleries, said: “There are some fascinating stories behind the animals in our taxidermy collection and they are also a reminder of a time when rare and endangered animals were treated in a very different way than they are today.

“It’s one of the reasons why it is so important that we preserve them, so modern museum goers can not only enjoy them, but learn some important lessons about conservation and the natural world too.”

For more details on the Leeds Discovery Centre visit: http://www.leeds.gov.uk/museumsandgalleries/Pages/discoverycentre