Powerful images of soldiers on the front lines of the First World War have been stunningly brought to life by a Leeds artist.

Using a specialist type of vintage photography together with the latest computer technology, the historic sepia-toned photos captured in war-torn Europe have been reinvented as “moving” 3D scenes.

Artist Helen Dryden joined a small team of volunteer curators earlier this year to work on objects and artefacts collected during The Great War and began focussing on some of Leeds Museums and Galleries’ huge array of poignant images taken during the conflict.

Among them were a number of stereoscopic cards- pairs of side by side, virtually identical images. When inserted into a viewing device which was popular in the early 20th Century, they would give an illusion of seeing the scene in 3D.

Stereoscopes went out of fashion with the advent of more sophisticated photography, but working with those fragile photos as well as others which were not made for stereoscopes, Helen was able to recreate the same animated effect and give the compelling scenes a completely new lease of life.

Helen, an MA student at Leeds Arts University, said: “I am interested in photographs, they are able to give us so much information if we look carefully. And so when I saw these World War One photos I tried to think of ways to 'bring them to life' so that people so that people might notice more.”

“After experimenting with different methods to find a way to make them appear 3D, I hope people are drawn into the photo, and view the image as if they were standing there where the photographer once stood.”

Included in the photos Helen worked on was a stereoscope card showing the ruins of Beury Chateau, Festubert- the scene of a major British offensive in May 1915- and a similar image of soldiers surveying all that remained of Richbourg Cathedral after it was destroyed by explosions in around 1915.

Another photo captures soldiers in the trenches, manning a mortar as they watch through a periscope whilst a particularly striking image captures comrades in the 5th Battalion The Yorkshire Regiment as they gathered together for a photo.

Helen added: “I began the project not knowing a lot about World War One, other than some things I learned a long time ago in school. It was fascinating to start discovering the objects in the museum collection, and researching them to find out more. I really learned a lot.

“I hope that by making the photos 3D, the viewer will be drawn in and visitors can connect with the people in the photograph in a new way.”

Helen’s 3D images are now set to be displayed on screens in Leeds City Museum. Like many big cities, Leeds played an important role in the First World War, with around 82,000 local soldiers signing up and around 10,000 never returning home.

Leeds Museums and Galleries has gathered an extensive collection of objects which tell the story of both those who served and the impact the conflict had on the city as a whole.

Many of those objects were studied and displayed as part of the 100 year anniversary of the armistice which ended the war. Lucy Moore, Leeds Museums and Galleries projects curator led the project and worked with volunteers like Helen on the project.

She said: “The impact the First World War had on the lives of people in Leeds was like nothing the city had seen before and the conflict left behind a unique legacy for both the city and its residents which is reflected in the sheer breadth of objects we have in our collection.

“Working with communities and volunteers like Helen can give us a completely different perspective on those objects and, like these incredible images do, bring them to life for our visitors in new and exciting ways.” 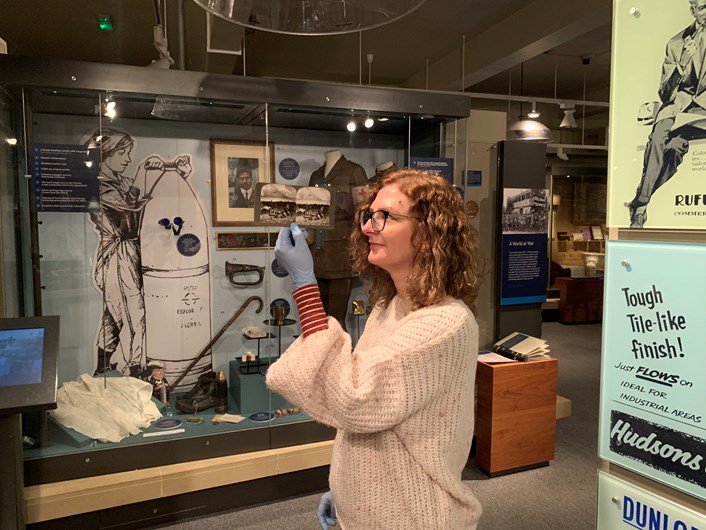