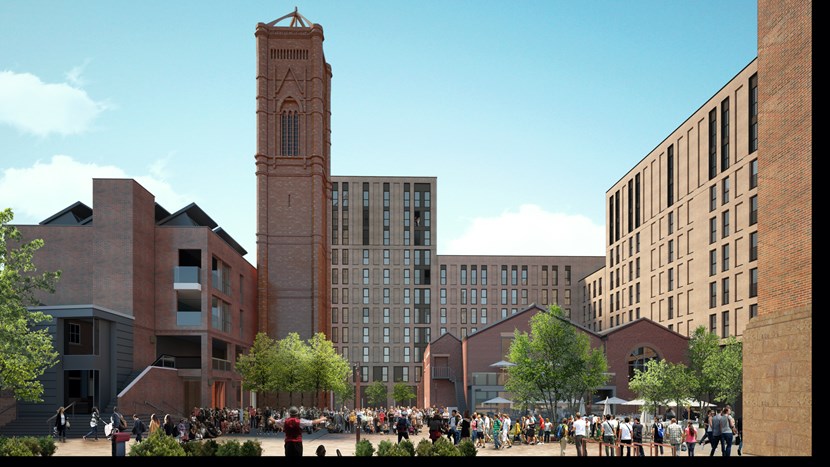 Image caption: A CGI of how The Tower Works redevelopment could look with The Engine House building at the front right of the image (Credit: Richardsons)

A building which once powered a key part of the city centre of Leeds during the industrial revolution is set to bring a new spark to one of the biggest regeneration schemes in Europe as it is brought back into use for the TV and film sector.

The Engine House, located in the South Bank of Leeds was formally used as a power source for Tower Works, the building responsible for developing the wool combing machines on which the pin-making business was formed. Leeds City Council is now seeking expressions of interest from film and television post-production companies to take a lease on the grade two listed property and then work with the successful organisation to bring the property back into use.

The building retains a large part of the city’s heritage as ten medallions adorn the walls depicting significant contributors to the industrial revolution. A number of interconnecting rooms make up this historic building with the actual Engine House, Economiser Room and Boiler House, all making up a great space for new facilities.

The South Bank is already home to over 500 creative and digital businesses along with a number of award winning independents and is seeing new businesses relocate to the area. Located just a five minute walk from Leeds Station, the busiest transport hub of the north, and the new Channel 4 headquarters at the Majestic, the Engine House is part of the ambitious development plans surrounding the South Bank, which include doubling the size of the city centre and bringing thousands of new homes and jobs to Leeds as well as a new city park.

In the near future the council will commit significant funding (which has already been secured externally) to refurbish the internal and external fabric of the building, along with developing services such as power, data, water, drainage, heating and ventilation and then will work with the successful applicant to develop the rest of the building.

“It’s fantastic to be able to bring such a historically important building in Leeds back into use and provide this new opportunity to the TV and film sector.

“With this ever growing sector and with Channel 4 coming to the city later this year, we are keen to support and work with companies to open up opportunities to help businesses work and expand within the city with the right spaces.

“The regeneration of the South Bank of Leeds brings ambition and opportunity together in an area which is moving forward apace with the new City Park plans and the start of builds on over a thousand new homes."

‘’The independent production sector in Yorkshire has never been healthier following ten years of unprecedented growth. and we are thrilled that Leeds City Council has recognised the important contribution that enhanced post-production facilities can make to continued development of the sector.’’

Regeneration in and around this area of South Bank is already ongoing, with the Tower Works site now largely cleared and poised to be redeveloped by Richardson to provide a mix of residential and commercial spaces directly adjacent to the Engine house.

For more information about the site, and to find out how to submit an expression of interest visit https://southbankleeds.co.uk/the-engine-house

Leeds City Council is in the process of procuring the design for improving the external envelope of the building and, following completion of the expression of interest exercise, will commence negotiations with the successful applicant about shaping the building internally and externally to suit the needs of the applicant.

The Engine House is one of many areas the council is looking to support the creative and TV and film sectors. We are currently seeking views from the Creative, Digital, Cultural and Film / TV sectors on the supply in the city of workspace and creative spaces, and how barriers may be addressed and planning for future opportunities. The Leeds Inclusive Growth Strategy outlines the city’s commitment to these sectors, aiming to provide affordable workspace and recognising that this may require the development of new spaces. http://www.leedsgrowthstrategy.co.uk/workspace-call-for-evidence/ 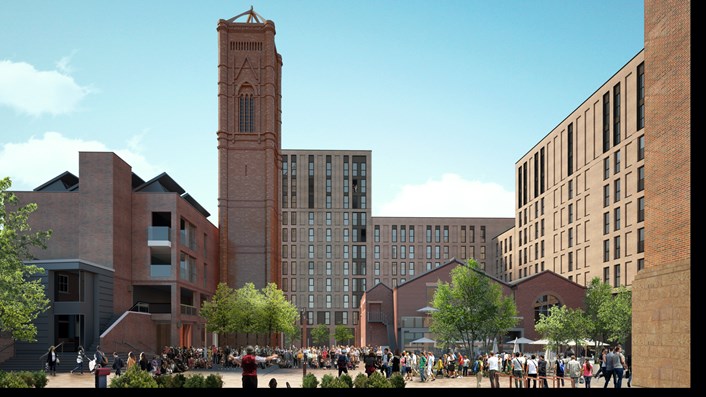