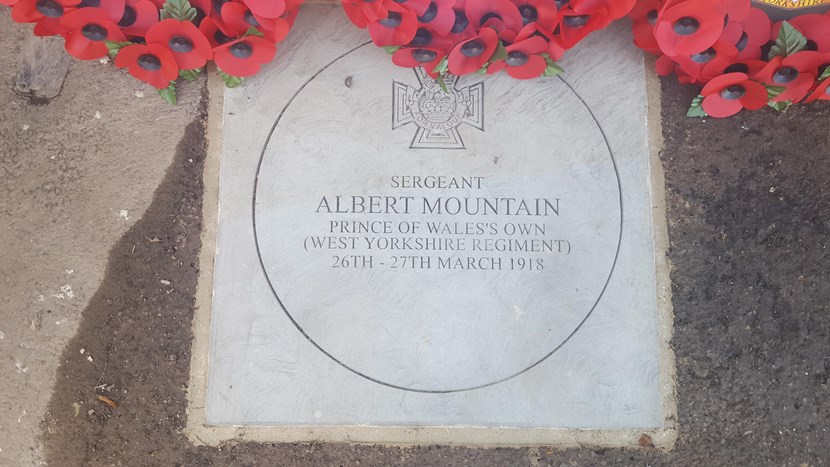 A soldier who was awarded a Victoria Cross (VC) for his remarkable bravery during the First World War has been recognised with a special tribute in the east Leeds community he hailed from.

As part of a special service held this week, a unique paving stone was unveiled in Garforth to mark the centenary commemoration of the VC medal to Sergeant Albert Mountain, who served in the Yorkshire Regiment. The paving stone is located at The Miners Bar & Kitchen under a blue plaque marking Sergeant Mountain’s efforts, who was landlord of the pub from 1953 until his death in 1967.

Sergeant Mountain’s valour and bravery at Hamelincourt, France on 26 March 1918, is detailed in his nomination for a VC, which bestowed for gallantry in ‘the presence of the enemy’ is the highest award in the United Kingdom’s honours system.

The nomination describes that ‘when the situation was critical, 22-year-old Sergeant Mountain with a party of 10 men attacked an advance enemy patrol of about 200 strong with a Lewis gun’, and ‘then rallied his men in the face of overwhelming numbers of the main body of the enemy, to cover the retirement of the rest of the company’. Sergeant Mountain was one of five men that ‘held at bay 600 of the enemy for half an hour’. Later, he took command of the flank post of the battalion, where they held on for 27 hours until finally surrounded.

In attendance at the service with the Lord Mayor of Leeds Cllr Jane Dowson, which included a speech by the Lord Mayor and a bugler, were local representatives and members of Sergeant Mountain’s family. Represented at the service were serving soldiers and veterans of The Yorkshire Regiment. Also on display at the event was Sergeant Mountain’s VC, which was donated to the Yorkshire Regiment by his family following his death.

The establishment of a commemorative paving stone to honour Victoria Cross (VC) recipients in England from the First World War was introduced by the Department for Communities and Local Government (DCLG) in 2013. Working with local councils, these paving stones are placed in appropriate locations linked to the recipient’s birth place.

“The stories of bravery and heroism shown by soldiers in times of extreme difficulty and struggle are truly remarkable, and the deeds of Sergeant Mountain who was awarded a Victoria Cross for his actions during the First World War, exemplifies this.

“It was real honour to be given an opportunity to be at the unveiling of this paving stone tribute in Garforth for Sergeant Mountain to mark 100 years since the award of his Victoria Cross and also very moving that members of his family were also in attendance. This paving stone will ensure that the courage and achievements of Sergeant Mountain will never be forgotten in the community where he was from.”

“It’s a great privilege for our young soldiers to learn about the achievements of our past heroes and to be present at the unveiling. As the only true county regiment left in the British Army, we take great pride and strength from our connection with Yorkshire and the towns we all come from. We are also honoured to have brought with us Sgt Mountain’s Victoria Cross, which was donated by the family to the safe keeping of the regimental museum in Tower Street in the same year Albert died, 1967.” 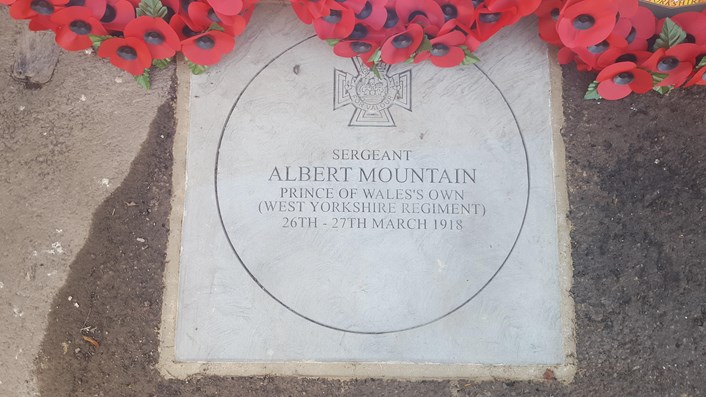