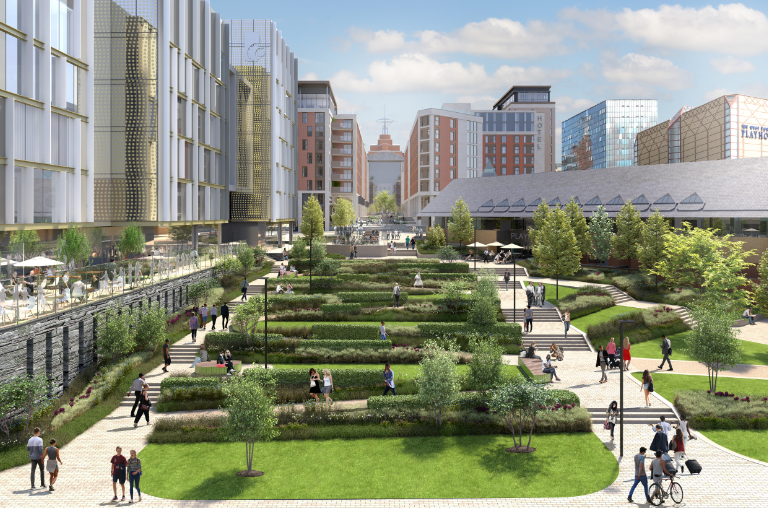 ​New design proposals to be submitted to Leeds City Council’s executive board next week show the planned redevelopment for one of the key gateway areas of the city.

The artistic images show the £1.9m planned redevelopment of the existing green space in Quarry Hill, which forms part of a large programme of works for the revival of public spaces in the city centre and also complements the major redevelopment proposals in this area of the city, which will take place over the next two years.

As part of Leeds’s ambition to be the best city by 2030, which sits alongside the bid to become European Capital of Culture in 2023, an innovative approach to developing public space in the city has been put in place which focuses on bringing to life key areas of space across the city centre so as to provide people living, working and visiting the city with spaces that they want to visit and use.

The Quarry Hill scheme will complement other developments taking place in this area of the city, including the West Yorkshire Playhouse refurbishment, the new Leeds City College building and the proposed Caddick development.

“One of our greatest cultural assets in the city is the areas of public space we have.

“We have a real opportunity to shape a fantastic city centre over the next few years, with a big ambition of the being the best city by 2023.

“This latest development is one of 15 transformational schemes identified for the city centre as part of an innovative new approach to making the city centre more welcoming and a quality environment.

“We want a city centre that is inclusive, friendly and cutting edge, where our residents and visitors want to spend time socialising and working in vibrant and open spaces.”

Some of the projects that have already been delivered in the city centre include; the ongoing proposals for the redevelopment of South Bank, as well as new green space at Sovereign Square, Little Neville Street and the improvements to Bond Court. Alongside these permanent development, a number of spaces across the summer months have been transformed into temporary pop up parks and play areas including Cookridge Street and St John’s Churchyard, all proving a big hit with visitors, residents and workers across the city.

For more information about the scheme you can ​view the report here.

Quarry Hill is located on the east side of the city centre adjacent to Eastgate Roundabout and is bounded by the A61St. Peter’s Street and Regent Street to the west, York Street to the south, Marsh Lane to the East and the A64, New York Road to the North (Appendix 1). It is one of the city’s key cultural destinations, home to West Yorkshire Playhouse, Leeds College of Music, Stanley and Audrey Burton Theatre, Red Ladder theatre and Northern Ballet as well as the Quarry House Department of Health Building. It is also home to a variety of bars and restaurants such as café 164, The Wardrobe, Kendells Bistro, Aagrah’s and Ipsum Vinoteca. 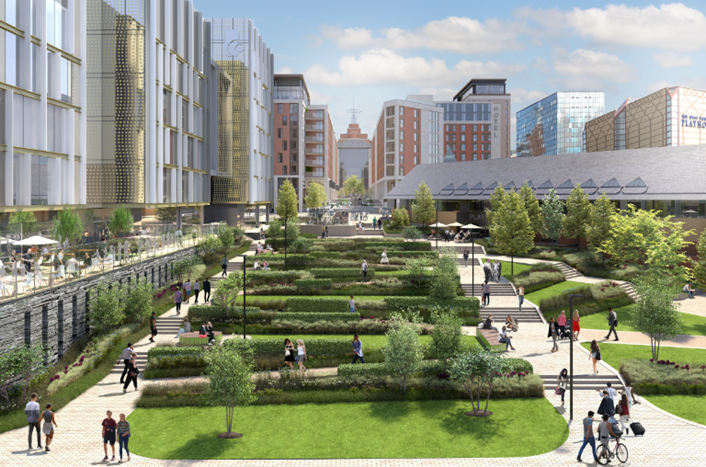