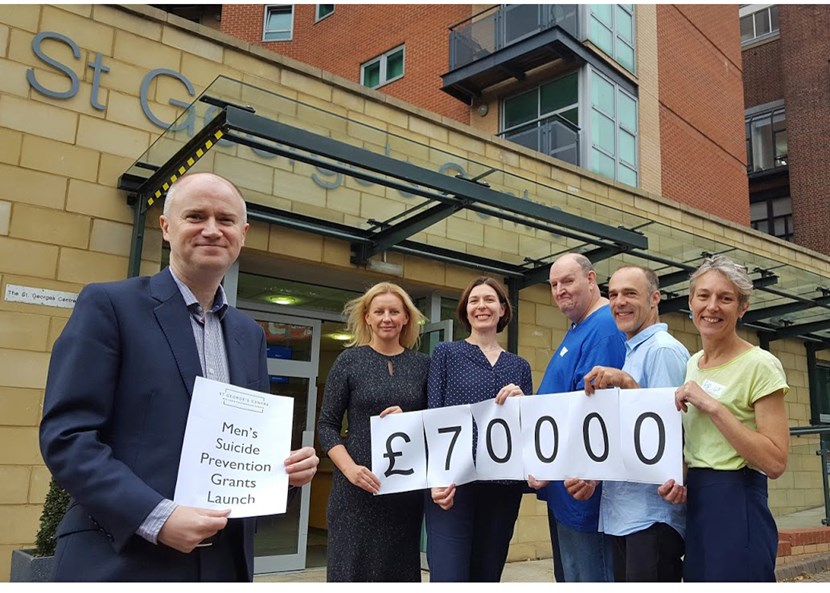 The latest round of grants for suicide prevention work in some of the most at risk areas of Leeds have been awarded.

The funding, an investment by Leeds City Council announced by council leader Councillor Judith Blake, is targeted at supporting social activities for men determined by local men themselves and providing outreach work with targeted communities in order to reduce social isolation. Working closely with Leeds Community Foundation (LCF), the council is allocating funds to areas of need where activities for socially isolated men are lacking for communities with the highest suicide rates involving socially isolated men.

“Reducing suicide, attempted suicide and self-harm across Leeds is an absolute priority for the council. Sadly, we know that nationally men are over three times more likely to take their own life, and so we are committed to funding new and innovative ways to support individuals from higher-risk groups to live happier, healthier and more fulfilling lives.

“We also know that certain areas of the city experience higher levels of suicide and self-harm than others, and these grants are an excellent opportunity to connect with and make a difference in communities where it is most needed.

“Working closely with Leeds Community Foundation organisations, individuals and their loved ones, we can focus our local community engagement in order to build a better understanding of this important issue and work towards reducing the stigma surrounding mental health, which we hope will make a real difference citywide.”

“We have been delighted with the creative approaches and sound knowledge of men’s health issues shown in these two rounds of applications. We know many different people and organisations in the city are keen to support suicide prevention work. This three year grant programme is a great opportunity for local organisations to bid for funding to deliver activities they know will work in their community and we encourage other groups working in the target areas to apply to future rounds in 2020 onwards.”

Successful awards have gone to:

· Feel Good Factor have been awarded £25,000 to recruit a network of men's health advocates or “Manbassadors” to engage with businesses and organisations within the LS9 postcode. Together, they will develop ways to effectively connect with over 100 isolated men and engage them in supporting each other through activities that help improve health and wellbeing and address risk factors associated with suicide. Feel Good Factor is part of the Orion Partnership and has a strong track record of actively supporting men around health and wellbeing and will draw on the men they currently support to gain their insight and experiences of isolation.

· Leeds Mind’s grant of £25,000 will enable them to specifically reach out to more men who reside in communities that are at higher risk of suicide and who are least likely to engage with existing support. Through their programme of outreach in Horsforth and Inner West Leeds, their project worker will look to reduce barriers such as stigma and gender stereotyping and connect with and support 40 men, working with them to develop opportunities for mutual support and linking them in with local activities. Through this work it is hoped men will improve their social networks, reduce their social isolation, improve their ability to talk about their feelings and develop coping strategies.

With their large grant of £25,000, Health For All will be engaging isolated men living in Beeston, Holbeck, Belle Isle & Middleton and offering them activities that will help broaden their horizons, increase their confidence, sense of self-worth and hope for the future. Health For All and its Menspace Skills Hub have a longstanding presence in these communities and bring strong links with families, community groups and voluntary and statutory service providers so they can effectively reach isolated men. Transport will be provided alongside one-to-one support and encouragement so men can try a range of existing and new activities - from gardening and DIY through to cooking and IT - hone their skills and help co-create new activities and trips for men.

· Barca Leeds have been awarded £12,000, for a project working with communities in LS12 and LS13, and which is also funded thanks to an additional grant of £19,000 from Jimbo’s Fund. Their INSIGHT Male Suicide Prevention Project will enable 45 vulnerable and isolated men to access and develop group activities, to build social networks, friendships, increase confidence, resilience and, where required, gain individual support from other specialist services. Barca bring previous experience of working in LS12 through their INSIGHT project where they gathered personal experiences and views from local people who had been touched by male suicide. Their year-long ‘Rise High’ pilot project, in the New Wortley Tower Blocks was very successful and as one man stated “The benefit of this project to me has been amazing. I have only been involved for a few weeks, however my mood and self-confidence has improved. Because of the project I have started volunteering and am doing MIDAS (minibus driver) training.”

New Wortley Community Association is setting up a weekly walking group for socially isolated men living in and around New Wortley to come together, make friends, eat together as a group, talk about issues they may be facing and actively look for opportunities to get involved with local campaigns such as litter-picking, canal-side clean-ups in order to boost confidence and self-esteem by giving back to the local community.

Zest Health For Life will be running an IMPACT group for men who want to learn new skills, get involved in activities, and play an active role in the delivery of peer support work through becoming men’s group champions. This will strengthen Zest Health For Life and other Orion partners’ Orion Wellman offer in East and North East Leeds.

Cloth Cat Studies ‘Man About Town’ project will deliver group activities chosen and scheduled by men, including live and computer-based music, photography, film and animation, all with the aim of reducing social isolation, initiating friendships and reigniting a spark for music and digital arts.

Humans Being will be offering a series of training courses to equip volunteers in five community cafés as ‘men’s wellbeing ambassadors’. Following the courses, volunteers will be able to use their skills and own life experiences to informally support vulnerable men who use the cafés.

Red Ladder Theatre Company will be using live theatre to create a space for vulnerable and isolated men in Leeds to come together and bring the subject of mental health and suicide into the open. The ‘Life & Soul II’ performances will be in targeted areas and delivered in informal ‘non-theatre’ venues such as pubs, sports venues and working men’s clubs. The after-show sessions will be facilitated by a men’s mental health specialist to stimulate discussion, address stigma and encourage mutual support among men.

More information about work done in Leeds to prevent suicide can be found at: http://bit.ly/LeedsSuicide

Suicide Prevention is a key public mental health priority in Leeds. There is a long-standing, multi-agency strategic Suicide Prevention group, and the Leeds Suicide Audit is nationally recognised as best practice. Leeds has also been cited as a best practice case study for investing in ‘postvention’ (i.e. counselling and other social care given after the experience of a traumatic event, especially to those directly affected by a suicide bereavement).

The Leeds audit published in 2016 found that men are almost five times more likely to end their own life than women. This is higher than the national average of three to one. The rate of suicide in men has increased since the previous audit, whilst the rate in women had not. White British males were over twice more likely than BME men to end their life by suicide. 55% of the audit population lived in the most deprived 40% of the city. Nearly 70 % of the audit population were single, divorced or separated compared to 28 % who were married, cohabitating or in a civil partnership. A theme of social isolation emerges from these findings.

The programme for applications is currently closed, but more details on the programme are available at: https://leedscf.org.uk/leeds-mens-suicide-prevention-fund-small-grants