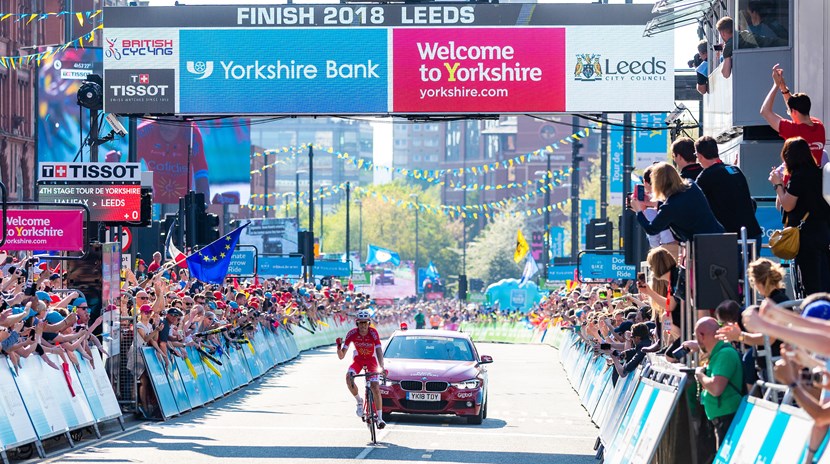 Sent on behalf of Welcome to Yorkshire:

With one month to go until the 2019 Tour de Yorkshire, organisers Welcome to Yorkshire and Amaury Sport Organisation have unveiled the highly anticipated race timings.

The Women’s Race has moved to a Friday and Saturday this year in order to allow more people to celebrate the race. The women’s stages will commence in the morning with the men’s stages following in the afternoon.

Timings have been calculated by anticipating the peloton’s average speed but are subject to change depending on variables such as wind speed, direction and how aggressively the riders race.

Timings for the race caravan and ambassadors tour have also been included and list the stop-off points ahead of the race where fans will be treated to a host of promotional goodies from the official race partners as well as getting to meet some British cycling legends.

Welcome to Yorkshire Commercial Director Peter Dodd said: “It’s always exciting to share these timings as spectators can now plan exactly where and when they want to watch the race. Every time we see them we’re astonished by how quickly the peloton travels, but these are the best riders in the world after all!

“There is a whole host of added entertainment being planned en-route so be sure to line the roadside early on the days so you get to see the colourful race caravan and fleet of Yorkshire cycling legends pass through.”

The full schedule and race timings can be viewed online now at http://letouryorkshire.com/timings

The men’s race will start in Doncaster Market Place at 13:05 before heading towards Beverley. On the way the riders will pass through Snaith (14:02) and Howden (14:24) before the first intermediate sprint is contested in Elloughton at 15:03. The peloton will reach Beverley at 15:38 and then head into the Yorkshire Wolds to tackle the first classified climb on Baggaby Hill at 16:34. That will get the legs pumping before a brisk descent into Pocklington for a second intermediate sprint at 16:38. There will be no time for respite as the riders sweep through Elvington at 16:56, and the pace will continue to rise on the brisk approach to Selby. By the time they hit Gowthorpe in the centre of town the peloton will be flying and the action will reach its conclusion outside Selby Abbey at 17:40.

The men will start outside Barnsley Town Hall at 14:45 before exiting in a north easterly direction and past Nostell Priory at 15:12. The route then heads towards Pontefract where the first intermediate sprint will be held at 15:23. Garforth (15:43) and Scholes (15:53) both make appearances as the route then skirts Leeds in an anti-clockwise direction, and shortly after the peloton have exited Leathley (16:26) they will commence the Côte de Lindley at 16:29. With that done and dusted it’s on to Harrogate where the riders get the chance to tackle the exact same circuit that will be used at the 2019 UCI Road World Championships. An intermediate sprint has been added on Parliament Street where the Championships finish line will be at 16:50, meaning the riders can hone their tactics in preparation for September. Once that loop has been concluded the stage continues north, through Ripley (17:06) and Ripon (17:20). Then it’s full steam into Bedale for an expected bunch sprint right in the centre of town at 17:55.

The opening women’s stage meanwhile, gets going in Barnsley at 09:05 and will follow the exact same route as the men. The riders will duke out the first intermediate sprint in Pontefract at 09:47 and crest the Côte de Lindley at 11:04. The second sprint in Harrogate comes at 11:28 before the peloton passes through Ripon at 12:02. Then it’s on to Bedale for a scheduled finish at 12:43.

The male riders will roll out in front of Bridlington Spa at 14:30 and once they have exited town they will head into the North York Moors National Park. The Côte de Silpho is looming large at 15:34 and the opening intermediate sprint will be contested just after Harwood Dale at 15:47. With those points in the bag the route continues north and the action is set to reach Robin Hood’s Bay at 16:02. Once the peloton have passed through they will climb the Côte de Hooks House Farm at 16:05. Then it’s on to Whitby with a second intermediate sprint in front of the Abbey at 16:14. The views will be spectacular on the approach to Sandsend, and it is there that the Côte de Lythe Bank will be waiting at 16:25. Once they have crested that the route heads inland but the climbing doesn’t stop, and the Côtes de Grosmont and Ugglebarnby are waiting at 16:53 and 17:02 respectively. With those in the bag the race heads back to Scarborough and the frontrunners will sweep along South Bay, around the castle walls, and onto the now-legendary finish along North Bay at 17:45.

Before all that the women will commence in Bridlington at 09:05 and contest the Côte de Silpho at 10:20 before the first intermediate sprint comes in Harwood Dale at 10:35. The second climb at Hooks House Farm is set to be scaled at 10:57 before another sprint takes place outside Whitby Abbey at 11:07. The Côtes de Lythe Bank (11:21), Grosmont (11:53) and Ugglebarnby (12:05) should prove selective, meaning the winner of the stage in Scarborough at 12:56 is also likely to take the overall Asda Tour de Yorkshire Women’s Race crown as well.

The Piece Hall in Halifax will provide a spectacular start location at 12:35 and the action will head up the cobbled Main Street in Haworth at 13:11 before the first of six categorised climbs comes on the Côte de Goose Eye at 13:21. Crossing from Brontë Country into Craven, the route heads through Skipton at 13:35 and the next climb is looming on Barden Moor at 13:49. The action will then head into the Dales and the riders contest the first intermediate sprint in view of Kilnsey Crag at 14:17 before hitting the fearsome Côte de Park Rash at 14:31. The route continues on to Masham (15:23) and into Nidderdale where the riders will grind their way up the Côte de Greenhow Hill at 16:05. The undulating terrain doesn’t relent and shortly after passing through Otley at 16:39 the next categorised climb is on the cards at Otley Chevin (16:45). The final intermediate sprint points will be fought out in Tinshill at 16:58 before the riders sweep into Leeds for a rip-roaring conclusion on The Headrow at 17:17.

Full details on the route can be found at http://letouryorkshire.com

There are plenty of other ways you can get involved with this year’s Tour de Yorkshire. The Land Art and Best Dressed Competitions have both been launched and full details on how to enter those can be found at http://letouryorkshire.com/landart and https://letouryorkshire.com/bestdressed respectively.

Feeling fit? Then why not tackle parts of the 2019 route for yourself by taking part in the Tour de Yorkshire Ride sportive. The three routes on offer are suitable for all abilities and culminate on the same finish line as the pros. Find out more at https://letouryorkshire.com/tour-de-yorkshire-ride 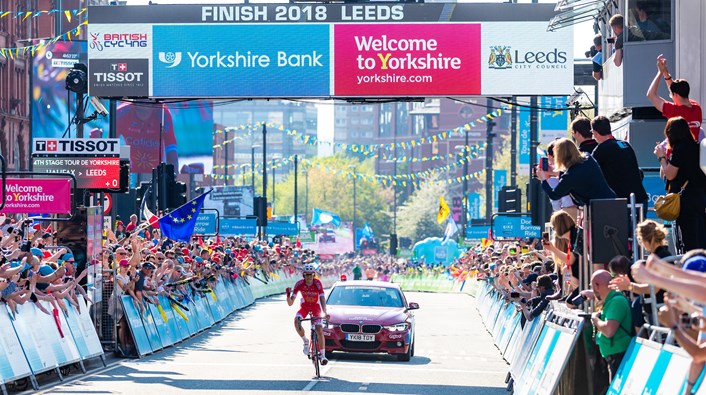