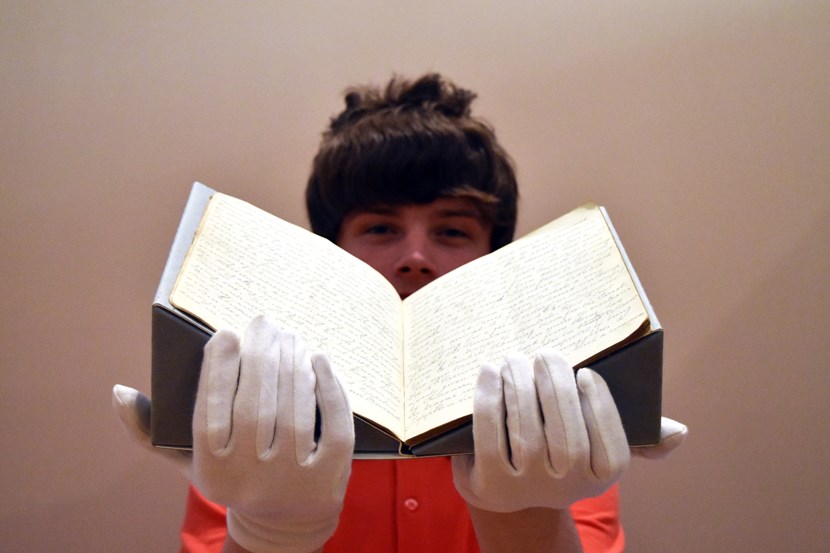 The emotional first-hand account of a Leeds man held captive in a German First World War internment camp has been rediscovered by a group of young history-lovers.

Albert Stockwell’s moving diary is being shown to the public for the very first time at Leeds City Museum as part of a new display looking at thousands of civilians based abroad whose lives were turned upside down by the outbreak of war.

The museum’s Preservative Party, a group of young curators, researched the diary for the display, which also features a selection of images and objects exploring an often forgotten facet of wartime history.

Albert, from Stanningley, who was then aged 49, was working in a textiles factory in the town of Wittenberg when the war began in 1914.

Because he was of fighting age, he was forced to uproot and move into the Ruhleben camp at Spandau, Berlin to prevent him returning home to England and being conscripted.

Deprived of his liberty, Albert, 49, kept a detailed diary in which he documented the hardships of life in the camp, the bonds forged between its 4,500 internees and his yearning for family, home and freedom.

One particularly poignant entry, dated May 6, 1915, reads: “Being in captivity as we unfortunately are, the wonders of nature have never before so strikingly appealed to us, the budding and breaking into leaf of the numerous trees in our midst, vegetation life, the sweet singing of the birds all tend to sharpen our longing for freedom.”

Albert’s diary describes every aspect of camp life, from daily chores and morale-boosting cricket leagues to the death of his infant son in England and the tragic suicide attempts of fellow detainees.

Lucy Moore, project curator with Leeds Museums and Galleries, said: “Albert goes into an extraordinary amount of detail about his time at Ruhleben and reading his diary, it’s impossible not to empathise with him and his fellow detainees and realise the huge emotional toll internment must have taken on them all.

“Abruptly wrenched away from the lives they had built abroad and faced with a very uncertain future, these men displayed incredible resilience and courage.

“Thanks to people like Albert, who eloquently articulated their thoughts, emotions and experiences more than a century ago, we have been able to better understand and commemorate their legacy as we also celebrate their story.”

Albert was eventually allowed to return home in 1916 due to advancing years and failing health. His diary remained in his family until earlier this year, when his great grandson donated it to Leeds Museums and Galleries.

Members of the Preservative Party researched the text, even travelling to Berlin in a cultural exchange with their German counterparts at the Jugendgeschichtswerkstatt (JGW) Spandau and Carl-Friedrich-von-Siemens Gymnasium.

Together, they learned more about the internment of German civilians at Lofthouse Park in Wakefield, visiting the site with German pupils and members of the JGW and speaking with local historians.

German students then created their own exhibition about the internment camps for display at the Spandau Citadel.

Councillor Judith Blake, leader of Leeds City Council, said: “This fantastic project has been a unique opportunity for young people from different cultures to exchange their thoughts and ideas about a fascinating chapter in history.

“Their efforts are a fitting tribute to the courage shown by those whose memory and sacrifices they have commemorated through this display.”

The new display can be seen at Leeds City Museum on Millennium Square. The museum is open every day apart from Monday and is free to enter.

The Preservative Party’s trip to Berlin was funded by UK-German Connections in partnership with In the Wrong Place at the Wrong Time, a public engagement project led by the University of Leeds.