It’s the quintessentially British brew that over the centuries has been enjoyed by everyone from Yorkshire’s lords and ladies, to its miners and mill workers.

Now a curator’s exciting new discovery about the history of the humble cuppa is causing quite a stir at Temple Newsam House.

The fascinating document, found buried in local archives, has revealed those who once called the estate home could have been among the very first people in the country to ever pop the kettle on.

Rachel Conroy, curator at Temple Newsam House, was at the West Yorkshire Archives researching for the forthcoming Beer: A History of Brewing and Drinking exhibition when she found an apothecary bill for medicinal ingredients bought for the estate in 1644.

Included in the English Civil War era shopping list was an order for a number of bottles of “China drink”, which was the old name for tea, with each bottle priced at four shillings.

The bill is thought to be one of the earliest known written references to tea in England, predating the famous text by noted diarist Samuel Pepys, who in 1660 wrote “afterwards I did send for a cup of tee (a China drink) of which I never had drank before.”

Rachel said: “This document is an exciting discovery which shows the people who once lived at Temple Newsam were real northern trend-setters of their day and were among the first in the country to enjoy a cup of tea centuries before it became such a staple in all our homes.

“Although it may be strange today for us to think of it as an unusual, exotic drink, back in the 1640s, tea had only just begun to make its way to England and would probably have been something of a novelty and quite a status symbol.

“Discoveries like this not only help us to build a more complete picture of what life at Temple Newsam has been like over the centuries, they also remind us how many amazing stories are still buried in archives and records waiting for us to find.”

Tea is believed to have spread to Europe from its Asian homeland in the mid to late 1500s, but didn’t become popular in Britain until much later.

London coffee houses were among the first to introduce the drink to British patrons, and by the late 1650s, it was being sold at six and ten pounds per pound and was touted as having properties including "preserving perfect health until extreme old age" and "making the body active and lusty".

In the 1600s, a skilled craftsman like a stonemason or a carpenter could expect to earn around seven pence for a day's work, so the even the price of the bottles purchased by Temple Newsam would have been somewhat extravagant.

Councillor Brian Selby, Leeds City Council’s lead member for museums and galleries, said: “Temple Newsam has played such a long and important part in the story of our city and new and exciting discoveries like this show just how much history is still there for our experts to uncover.

“The team at Temple Newsam does some incredible work finding new and exciting ways to make history and heritage engaging, fun and relatable for different audiences and this is another great example of that.”

Temple Newsam House has an important collection of British ceramics, including many used for making and serving tea that can be seen on display in the house. The house's Terrace Room is also home to two desks which once belonged to the famous Earl Grey.

For more details about the house including opening times and prices, please visit: http://www.leeds.gov.uk/museumsandgalleries/Pages/Temple-Newsam.aspx

There will be a chance to learn more about the history of tea at an interactive and practical workshop: Tea Etiquette on Wednesday, January 31 from 2pm until 4pm. Tickets are priced at £15 and can be bought via Eventbrite or by calling 0113 3367460.

The service has offices in Leeds, Bradford, Calderdale (Halifax), Kirklees (Huddersfield) and Wakefield. Anyone interested in the history of Yorkshire, who would like to discover what records have survived, is welcome to visit or contact any of the offices of the West Yorkshire Archive Service. WYAS collects and preserves historical records of all kinds dating from the twelfth century to the present day. 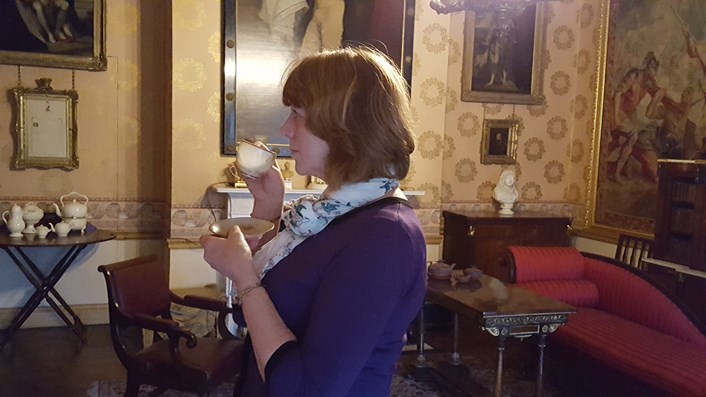