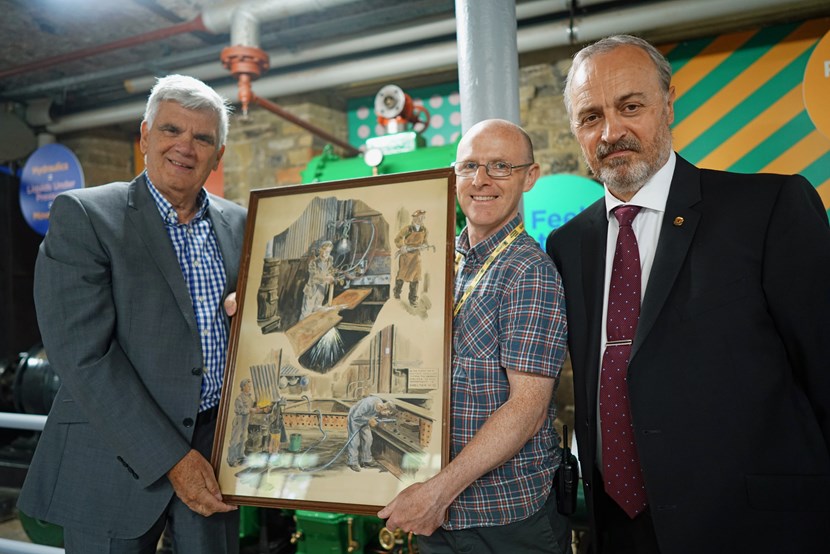 For more than a century it was a tried and tested piece of Leeds engineering that helped keep the proud story of Yorkshire’s railways on the right track.

And even in retirement, Leeds Industrial Museum’s stalwart crane had one last uplifting tale to tell after grabbing the imagination of a local business.

Earlier this week, representatives from Pudsey-based firm Wellman Booth visited the museum in Armley to donate a miniature replica of the historic crane as well as a series of eye-catching illustrations by renowned artist Helen McKie, depicting the efforts of local wartime munitions workers.

The generous donation was sparked by a recent museum project working with volunteers to restore and conserve the museum’s railway hand crane, which was made back in the 1880s by one of Wellman Booth’s forerunners Thomas Smith and Sons of Rodley.

Along with Joseph Booth and Brothers, the company helped the city build an international reputation for making cranes which were used across Britain and around the world back in the 19th Century.

John McGoldrick, Leeds Museums and Galleries’ curator of industrial history, said: “The history of our railways is dominated by engines and locomotives for obvious reasons, but cranes like ours played a crucial role in keeping the industry moving, literally doing the heavy lifting so that companies across the UK could flourish.

“More importantly, they’re an example of how much Leeds became a centre for engineering excellence, setting the standard for reliability and efficiency and building a reputation which would last for more than a century.

“We’re absolutely thrilled that Wellman Booth have helped us bring the story of our crane and this important piece of the city’s industrial heritage to life.”

The model crane, which will now be displayed at the museum, was made by a former Joseph Booth and Brothers employee Frank Midgley, a keen modeller who worked in the firm’s tool room from before the 1950s.

The Helen McKie illustrations were commissioned by Joseph Booth and Brothers and show munitions workers, including women, making shells at the Rodley factory during World War Two.

Helen McKie was a well-respected society illustrator known for creating artwork for railway posters. An archive of her work resides at the Victoria and Albert Museum in London.

Leeds Industrial Museum is housed within Armley Mills, a Grade II listed building which was once the worlds’ largest woollen mill. The galleries and collections tell the stories behind the industries which have shaped Leeds into the successful city it is today from weaving to steam engines and more. The textile galleries contain spinning wheels and working looms, offering insight into the wool and cloth industries which once made Leeds world famous. Tailoring galleries tell the tales behind how Leeds helped to launch high street fashion and Media in The Mill celebrates the historical importance of the creative industries, from film to photography and print making. Further museum spaces have been recreated and restored to their former glory including the Victorian school room and Mill Managers Cottage. The museum is also home to the Palace Picture House, a twenty-four seat 1920s cinema which screens family films and vintage classics throughout the year.