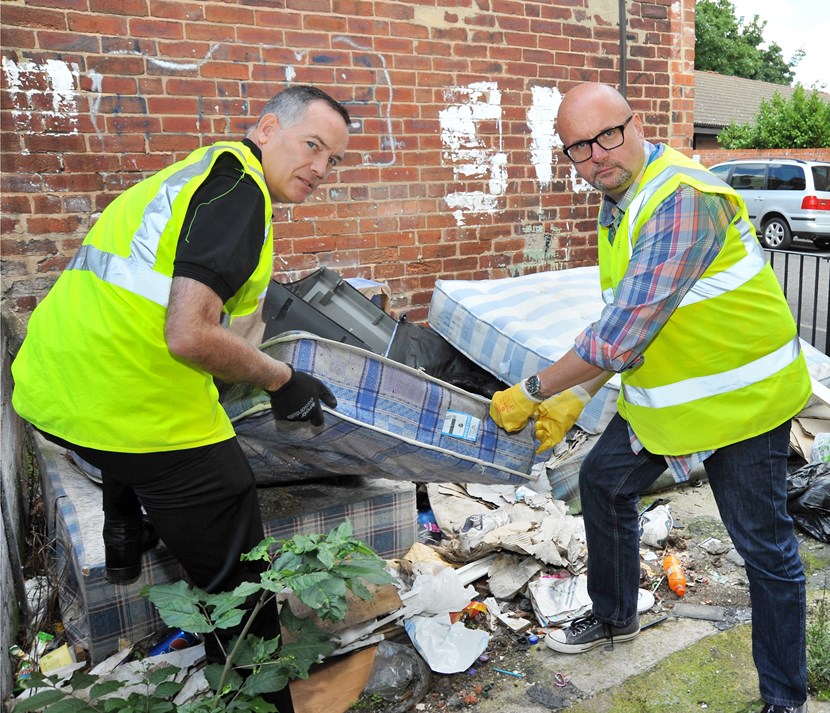 A senior councillor has joined crews in south Leeds to see first-hand their efforts to tackle flytipping.

The former toilet block was converted to a bin yard for residents to store wheeled bins, however, over time this has been abused and waste accumulates.

Councillor Dobson worked through the process and smells of gathering evidence that would link the furniture and waste to the flytipper before helping to clear it.

Bin yards are an easy target for those unwilling to pay or too lazy to have their waste recycled or disposed of properly.

There are around 270 bin yards in the area and the costs of repeated clean ups are part of the approximately £8 million a year the council spends keeping the city clean.

Working with communities to secure bin yards and make sure people know the correct and best ways to dispose of their household or business waste remains a priority for the council.

However, the council will always seek to prosecute flytippers where there is sufficient evidence.

Mobile CCTV cameras are being used in the area in an attempt to catch offenders in the act.

“Rolling your sleeves up and getting involved is one of the best ways to get a handle on an issue.

“Flytipping, particularly in bin yards, is a persistent problem in some areas. We’re not going to change people’s long-standing attitudes to waste overnight so the teams are continuing to work with communities so people understand and act on their responsibilities when it comes to waste.

“Alongside this, they are taking some very proactive steps that will allow us to nip issues in the bud and gather evidence to prosecute those who think it’s acceptable to use other people’s property as a dump.”

“As a team, we want to help people make some really positive changes as communities are fed up with litter and waste clogging their streets and bin yards. We want these changes to last so we don’t have to repeatedly clear up the same areas, saving the council money and resources and cutting the amount of complaints we receive about bin yards.

“With the co-operation of residents, tenants, businesses and landlords we can help them to help us keep their communities clean and safe.”