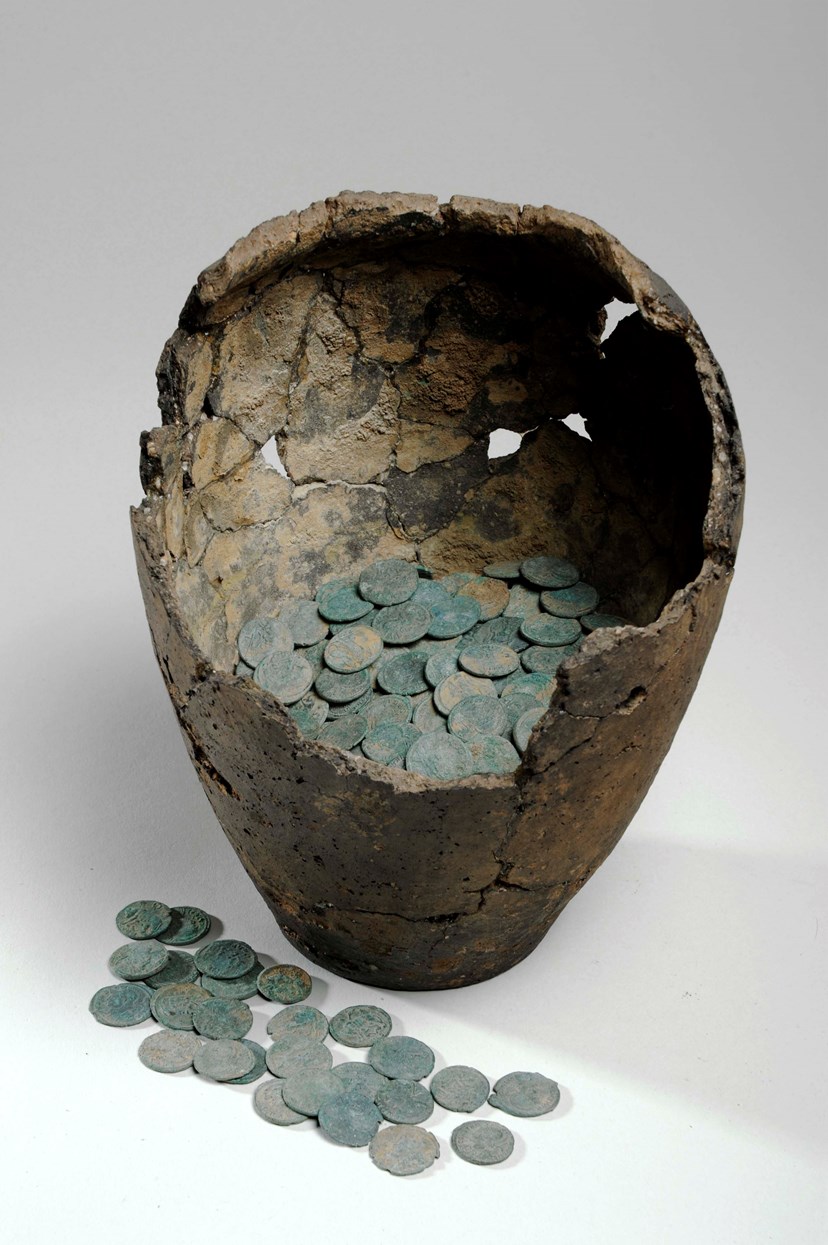 A remarkable Roman stash made up of hundreds of ancient coins has gone on display in Leeds this week.

Part of the famous Cridling Stubbs hoard, which lay buried in a North Yorkshire field for more than 1,600 years, can now be seen in Leeds City Museum’s Ancient Worlds gallery until July.

Experts believe the unique stockpile of more than 3,300 copper coins may have been hidden by the owner inside a large jar in around AD 346 to keep it safe from Saxon and Irish raiders.

Kat Baxter, Leeds Museums and Galleries’ curator of archaeology, said: “The 4th Century was a time of unrest in the Roman province of Britannia, when the country was coming under increasing attack from the Saxons and Picts, and there were internal power struggles.

“It’s possible that these coins were somebody’s savings and were buried to keep them safe underground so they could be dug up at a later date.

“We may never know for sure why they were buried, but the hoard is a truly remarkable and historically significant find which can teach us a lot about life, coins and currency during a turbulent chapter in the story of Roman Britain.”

The collection of coins was found in a field near Cridling Stubbs in the Womersley parish of North Yorkshire 1967, buried inside a pot with part of a grey-ware jar on top of it as a makeshift lid.

When the hoard was discovered it did not qualify as treasure under the old Treasure Trove law, so it legally belonged to the tenant farmer.

He agreed to sell the container and 447 of the coins to Leeds Museums and Galleries for £300, which were purchased with the aid of a grant from The Art Fund. Small groups of coins were also sold to other museums in Yorkshire.

The vessel containing the hoard was restored from several pieces and may have already been broken when it was filled with coins, suggesting that it was buried quickly in a time of crisis.

Most of the hoard is made up of coins dated between AD 300-346. These include special issues in honour of Rome and Constantinople (now Istanbul), and for Constantine the Great and the Caesars, emperors of Rome.

The collection also contains coins struck in memory of Helena, Mother of Constantine the Great, and Theodora, his step-mother.

The coins were meticulously recorded in 1967 by Elizabeth Pirie, then curator of archaeology at Leeds Museums and is displayed alongside catalogue pages, photographs and drawings from the museum archive.

Councillor Brian Selby, Leeds City Council’s lead member for museums and galleries, said: “This an incredible find and it must have been thrilling to have discovered thousands of coins which had been buried for centuries.

“It’s also a fantastic example of the history which is all around us every day in Yorkshire and we can only imagine what other extraordinary things are out there waiting to be unearthed.”

Leeds City Museum is free to enter and can be found on Millennium Square.