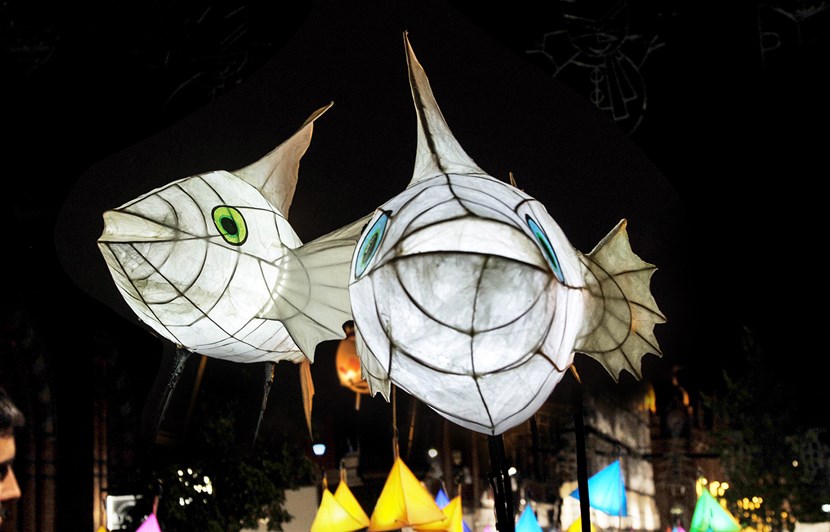 A dazzling array of illuminated lanterns, cyclists, walkers and runners will take over the city centre next month when Leeds hosts its first ever light triathlon.

Part of this year’s incredible Light Night 2016, the ambitious trio of installations will come together on October 6 in one of the highlights of the spectacular two-night celebration.

The unique event will include a stunning water-themed lantern parade, which people from across Leeds can take part in by crafting their own lanterns at three forthcoming workshops.

The parade, which will start on Briggate at 7.30pm, will also include street theatre and stilt walkers and will be put together by Hebden Bridge-based Handmade Parade, who have worked on similar spectacles around the UK.

Lantern-making workshops will take place at Leeds Central Library on September 25 and October 2. A workshop will also take place at Pudsey Civic Centre on October 1.

The light triathlon will also see a trail of brightly-lit cyclists adorned with glow sticks and coloured lights ride down the new Cycle Superhighway and into the city centre.

Organised by CityConnect, the event will start on October 6 at 7pm and those taking part can leave their bikes at the free CityConnect bike park so they can enjoy other Light Night events.

Places are strictly limited and more details and registration can be found at: http://cityconnectlightnightcycleride.eventbrite.co.uk

Veggie Runners and Space2, will also bring together runners with glow sticks, wearing their brightest clothes and trainers for the Light Night Art Run on October 6 at 6pm. Starting at Leeds College of Music, the event will include a 5km run and a 2.5km family run or walk.

This year will be Leeds’s 12th Light Night and, for the first time ever, will see the event take place over two nights.

Organised by Leeds City Council in association with the LeedsBID (Business Improvement District) and supported by Arts Council England, Light Night features more than 50 events outside and in venues across the city centre.

Thursday night will feature a family-friendly programme, including a forest of 90 giant, lit dandelions on Merrion Gardens and an interactive LED graffiti installation on Victoria Gardens. Both events will also take place on Friday.

Friday’s expanded programme will see local and international artists transforming locations around the city, including The Falls, a 100ft digital waterfall on the Queens Hotel, and Today, a ground-breaking music and light project in the Trinity Leeds shopping centre.

More details of further events will be revealed in the coming weeks.

Councillor Judith Blake, leader of Leeds City Council, said: “Year after year, Light Night continues to raise the bar, making arts and culture engaging, accessible and fun for people of all ages and creating some unforgettable images and memories which last throughout the year.”

Andrew Cooper, Chief Executive of LeedsBID, added: “Light Night is a shining star in the city’s cultural calendar and illuminates Leeds in spectacular fashion. It was one of the first events LeedsBID became involved with and we are delighted to continue to financially support this event and to assist practically, extending its audience, appeal and people’s overall enjoyment.”

The Phoenix in the Stone

Put together by Illuminos, The Phoenix in the Stone, will see the gigantic mythical bird represent the coming together of four elemental forces, symbolising the different parts of Yorkshire working together, with Leeds at their heart.

An interactive installation by artist Antonin Fourneau, Waterlight Graffiti features a wall covered with thousands of LEDs, which light up if their surface is touched by water.

Anything included a sponge, a brush, a water gun, or even a water atomizer can help anyone become an eco-friendly graffiti artist.

A mesmerising creation by Squid Soup, this huge, 3D installation, is made up of 6,000 lights that pulsate and change colour as it floats in the middle of Leeds Dock.

Set to a water inspired soundscape, the lights are designed to give the impression of movement.

The flowers are sensitive to light, fluidity and movement, allowing visitors to walk through them and connect with their environment.

The Falls, created by Dave Lynch, explores of the flow and form of water with an incredible 100ft digital waterfall projected onto the historic Leeds hotel.

With a musical score inspired by the forces of nature, the installation aims to explore both eh abstract and reality. 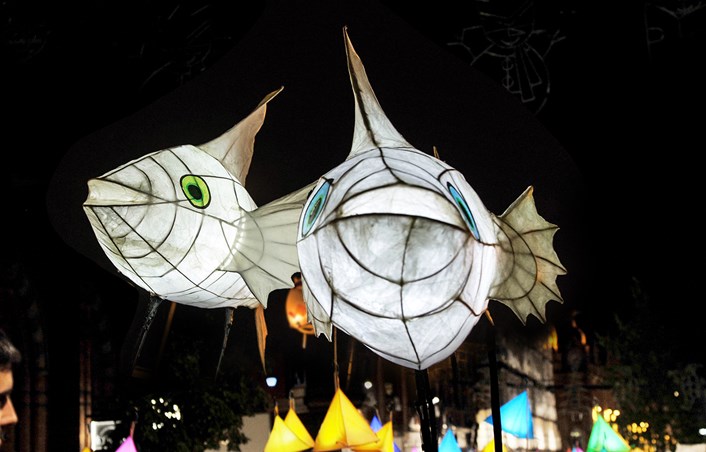